The final entry in my GenkiJACS culture class series! Not only because I've left Japan and am now catching up; but also because I did just about everything I was interested in during my six months.

Tea ceremony! This was something I'd been wanting to do throughout the stay, but somehow it always ended up scheduled when I wasn't available - in class, in Korea, ill... so I was anxious about getting on the last slot, just two days before I left school. Thankfully, this time it came together. In fact, due to the incentive scheme* for writing about your trip, I actually got to do this for free! It would have been shameful (to me, anyway) to get through six months in Japan without taking part in tea ceremony, nor wearing yukata or kimono even once.

* The school encourages people to write about their trip, and you can get credit for blogposts relevant to the school. I should emphasise (for fear of my reputation being besmirched) that this is guaranteed not subject to review or censorship. I simply wrote blogposts and sent a link to the school; they checked the posts were relevant, and gave appropriate credit. Not sure what would happen if you wrote anything particularly offensive, because I didn't.

This time it was another teacher (whose name I've embarrasingly forgotten) who escorted us to Hakata. Here there's a community centre, which has a room suitable for tea ceremony. Three ladies from a tea ceremony society were there to guide us through it.

Naturally, we had to dress the part. I was a bit disappointed to see we would be wearing yukata rather than kimono, but maybe that's normal? In any case, it was a lot faster than putting on full kimono would have been. 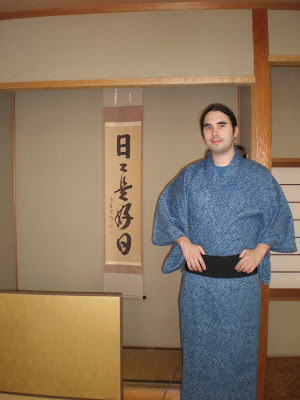 I'm mildly jealous, because the women get to wear bright patterned clothes while, as always seems to happen, men are stuck with fairly plain, dull-coloured outfits. Sigh. 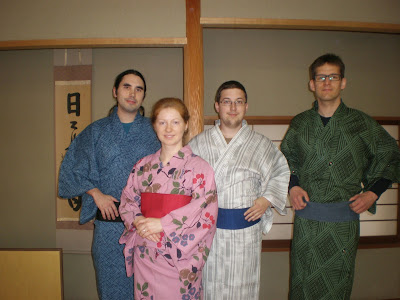 I thought this might be a very stiff and formal affair, but the ladies were very approachable and welcoming. They got us all to pose for some photos, presumably realising we'd all want mementos. The room is basically like most of the ones I'd seen in my travels, although I hadn't actually been inside a tea ceremony room before - for some reason they are often partitioned off at the doorway, when other rooms are open to tourists. 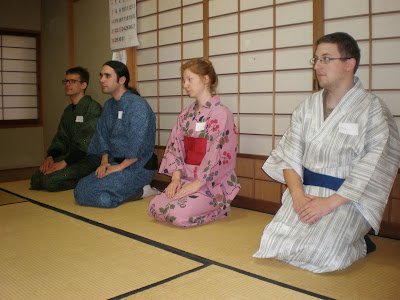 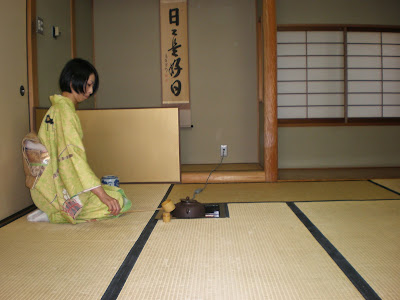 They got us to kneel, then brought out and explained all the implements. This was a fairly simple ceremony that would just take a few minutes, as we had to spend quite a bit of our time travelling to and from the centre. Note non-authentic name tags stuck to yukata! The lady here did the actual ceremonying, while the other two explained things and handed things to us. 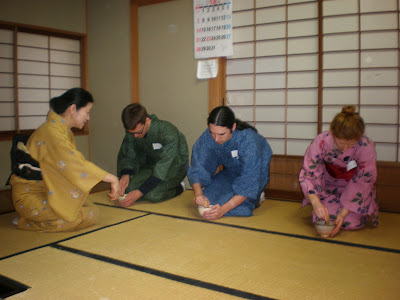 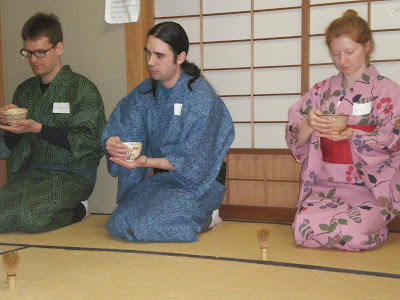 We got to mix our own tea, and were shown how you're supposed to turn the bowl. This is something to do with not drinking from the 'front', which is often decorated, presumably to keep it looking nice if any tea dribbles.

The ladies were very considerate, and made sure to point out that stools were available if we couldn't manage to kneel. We all demurred; I'm fairly used to it and can kneel for a while being only a little uncomfortable. Somewhere near the end someone asked whether it wasn't painful for us kneeling. I'd stopped thinking about it right up until that point, but the reminder suddenly promted my legs to get very painful! I stuck it out until the end, but then had quite some difficulty getting up and moving my legs... more practice required! 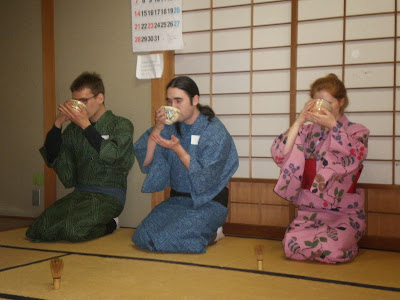 It was quite a brief session, really. That's probably for the best knees-wise, but it was a shame in some ways. I'd have liked to learn a bit more and experience a bit more of the ceremony, but the timetable simply doesn't allow for it. I'd certainly recommend this session, and would like to try another tea ceremony sometime.