I've been having a pretty grim time of it here applying for jobs. Unfortunately, my Japanese isn't good enough to apply for anything that requires Japanese, so it's of limited help so far. I am, to put it mildly, rather grumpy. 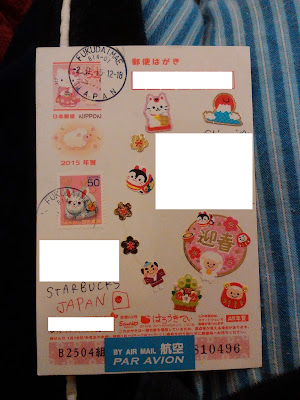 とっても感動したんだ。 It really touched me. I won't show the back, because I don't want to reveal anyone's names and editing out the personal bits wouldn't leave much, but that was even more touching. All the staff from the cafe wrote with their best wishes. I miss them very much!

Just in case either of them are reading this blog, I should mention that I had New Year cards from two other Japanese friends as well. I was happy to get both of them too! I think the reason this particular one touched me so much was that it was unexpected. You sort of expect that family and close friends will do nice things for you, and so it's not a surprise when they do, even though you appreciate it. When someone you don't know particularly well does something very kind, it's unexpectedly moving.

Lots of warm fuzzies over here!

Email ThisBlogThis!Share to TwitterShare to FacebookShare to Pinterest
Labels: people