As you can see, I started this post months ago in Japan. Still working through that backlog...

So it seems silly to spend six months in Japan without learning to make at least one national dish, right? Let's pick an easy one.

Having already tried this out in cooking class, I knew basically what to do, but wanted to try making makizushi from scratch. It has a lot of advantages. It's healthy, relatively straightforward, you can make it in advance (or at least, some of the prep can be done ahead of time) and it makes a decent lunch that doesn't require reheating.

Bowl of rice! For my first attempt, I didn't have any sushi rice. This caused some problems.

For those who haven't thought much about this, there are multiple types of rice. I knew that, but there were blind spots in my knowledge. In Britain, the overwhelming majority of rice has traditionally been indica long-grain rice, and seems to have mostly come from India originally. Other varieties of rice are labelled specially: basmati rice, Thai aromatic rice, wild rice, arborio rice, and of course, sushi rice. This latter needs distinguishing because it's not long-grain but japonica, which is short-grained and sticky. Stickiness is good for things like sushi.

In Japan, things are different. There are different types of rice, and cultivars of the types, but all Japanese rice is japonica. In Japan, the crucial division is between uruchimai (粳米) and mochigome (もち米). Uruchimai is your basic household rice, which you use for most things, mostly sold polished into white rice. Mochigome is highly glutinous and used for making mochi.

I'd managed, after some effort, to find and buy brown uruchimai rice. It's what I'm used to, and I was concerned that the Japanese diet seemed to be very low in fibre, so I didn't want to discard the best part of the rice too.

Needing to make sushi, I went into the shop and looked around. Obviously, unlike at home, there wasn't an obvious collection of sushi-making stuff in an International Foods section. Fresh sushi-able fish was over here, seaweed in the seaweed section, rice in the rice section, sushi wine in the sauces section. But look as I might in the rice section, there was nothing obviously marked out for sushi. This is a relatively common problem, because we quite often don't label foods as "Product for X", neither as their name nor as any kind of label. We don't, for example, sell "Eating Bread!" and "Topping-making Bread!" or "Great for Breadcrumbs!" - although recently toasting bread seems to be a thing, I admit. So after a while I gave up on reading and went to ask some staff where their sushi rice was. They were just really confused.

It's not that surprising really. All the rice was sushi rice, of course. There was no need to indicate this on the rice, because obviously you could use it for sushi (the idea of rice not suitable for sushi would perhaps have been surprising to consumers and needed indicating). And so when a random foreigner wanders up and asks for "sushi rice" the staff had no idea what I wanted. "Rice you can make sushi with" wouldn't be an obvious interpretation, because that's fundamental to being rice. Clearly, I must have been asking for something else. But what? Cue confusion, attempts at helpfulness. Since they didn't know what my problem was, and I had no idea that all the rice was japonica*, even between us we couldn't work this out.

*In my defence, I would like to point out that at that time I too had never heard of indica and japonica, otherwise even I might have worked this one out. That being said, just being scientifically labelled as "from Japan" doesn't actually indicate all rice in Japan is that type. I studied biology, I know how cludgy this stuff is.

So I went home, read the internet for a while, and then made sushi with my brown rice. I know, deeply suboptimal. But I only had a month or so left, and I didn't fancy buying five kilos of new rice that I'd never use up in the time. It worked out okay to be honest. 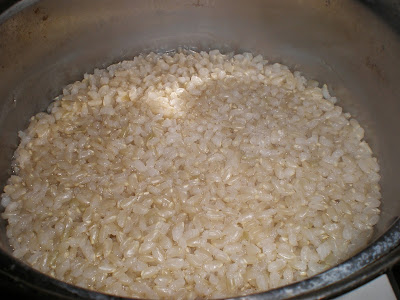 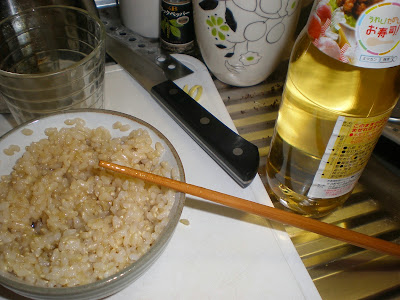 Mixing with mirin (rice wine) to make it sticky. You do this with japonica too, it's not just me... 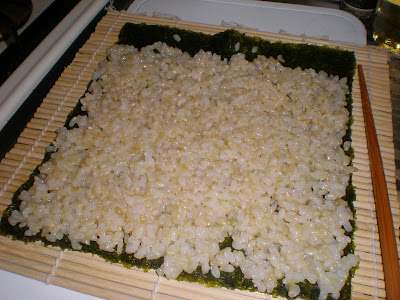 Laying out on the seaweed. It's important to get this nice and thin - I'm bad at this part. 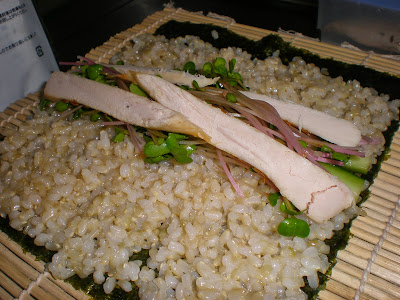 I never worked out what the long thin salad vegetable actually is. It seems like a kind of long cress. I like it very much, but haven't seen it back home. 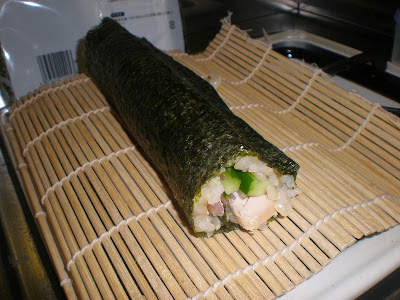 A complete, if lumpy, makizushi roll. 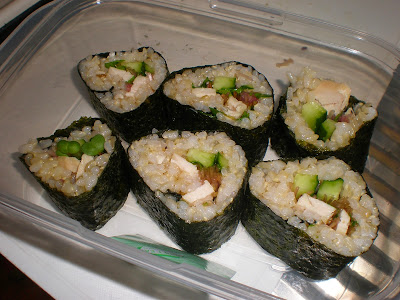 Tasted alright, although sadly the seaweed got a bit soft by the time lunch had arrived. There are ways around this, but they seem to involve complicated messing about with greased clingfilm layers between the rice and seaweed. Nope.

Once I got home at Christmas, I wanted to try and keep up some of the cooking I'd been doing. For myself I tend to eat an awful lot of stir-fries, but when you're cooking for the family it's a less good option. However, sushi I can do. This time, I went to a supermarket and raided the tiny Japanese section. Sadly there's no specialist food shop near us. 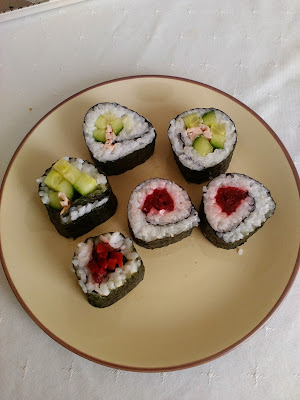 These are cucumber/chicken and beetroot makizushi. There doesn't really seem to be beetroot in Japan. I decideed it's not the best bet; although it looks cool (which is always nice) the vinegared beetroot and vinegared rice are a bit too samey. However, later experiments with beetroot and ham (yes, ham sushi, shut up) worked better. The beetroot adds colour while the ham compliments the taste nicely. 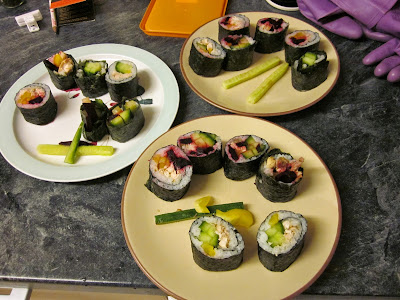 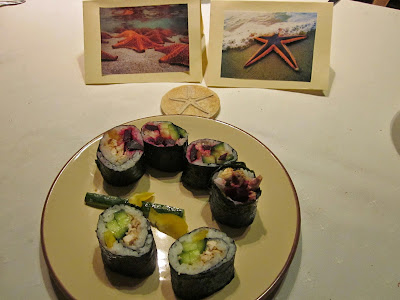 We ate these for Giant Starfish Night, a silly family event we hold every year. Seaweed fits the theme nicely.

As you might notice, these are all a bit non-traditional in that they lack fish. That's for two reasons. One, my mum is highly allergic to fish. Two, handling raw fish calls for very good fish and an awful lot of attention to hygiene. Unlike Japan, the UK doesn't routinely sell fish marked up as "suitable for eating raw" because that's not something we traditionally do. Even cooked fish goes off quickly and needs care. So I stick to vegetables and cooked meat for my sushi.