Since I've now been out of Japan for nearly six months, you might be forgiven for assuming there's nothing left to write. Wrong. I'm still catching up on half-drafted posts.

One of the things I did in Japan was bookshopping. I'm, um, a fairly voracious reader - I normally have over a hundred books waiting to be read, and get through a hundred or so in a year. Reading more manga recently (for insight into Japan and its culture, initially, and then just because it's fun) skew things towards bigger numbers, but reading a lot in Japanese pushes things very much the other way!

Anyway, surrounded as I was by Book Off and other cheapo bookshops, I dug in. It may be hard to work out the appeal, considering the hassle it'll be to get them home. Well, here, let me explain.

Why buy books in Japan?

The first thing is that I can save enormous amounts of money by buying books in Japan, providing we assume that I'd want Japanese books anyway.

Book Off and its competitors sell used books for anything from Y50 to Y350. Y350 is less than £2, around the price of a cuppa in a cheap cafe. It's also the bog-standard price for used books basically everywhere in the UK, except possibly school fairs and other very unpredictable charity events. Certainly, anywhere you might go deliberately looking for particular things. You can expect to pay twice that in many used bookshops, and £8 for an average paperback. A lot of the manga I was buying was Y150, and this is stuff that I specifically wanted, in mint condition.

But wait! Those prices I quoted for books in the UK? That's for English books. If you want "untranslated literature" (aka books in other languages) you're going to pay a premium. My experience is that it's typically another £2-3 for assorted import costs, even assuming you're buying from a major bookshop with a foreign language section.

Providing you're happy to buy second-hand, and you're either not picky or looking for common stuff that shows up in second-hand shops, you can buy a Japanese book in Japan for one-tenth of its UK price.

The UK is, shall we say, not friendly to other languages. In fact, it's not even friendly to its own. It is extraordinarily difficult to obtain books in any language other than English, even in the other native languages of the UK. I have had shop assistants in major UK book chains in England blankly inform me that, on the remote chance that they can actually order a (famous, almost ubiquitous) Welsh book for me at all, it will take between one and three months to arrive in the shop. It would take between one and three hours to get to a bookshop in Wales and buy it. I bought it online from a Welsh book company and it arrived the following morning. Bookshops are, by and large, simply not set up to handle anything other than English.

I overstate the case slightly. Large bookshops typically have a few famous (and deeply miserable) works in French, German and Spanish for high-school students. In some areas, there is a small assortment of picture books in Cantonese, Hindi, or whichever is the major minority language of the town. But you don't get any choice, really. You cannot browse. At best, you can look things up on a website and order them sight unseen.

In terms of Japanese, the huge major bookseller in the famous university town where I lived, which has a Japanese department and many Japanese students, had two books of parallel-text Japanese-English short stories and some phrasebooks.

Not so Japan. In Japan, you can walk into a bookshop and browse to your heart's content. You can, as necessary, spend ages looking up words from the blurb and double-checking you're in the right genre. You can glance at the text and check what level it's aimed at.

Moreover, you have a vast, vast selection of books that would simply never make it over to the UK. Only the most famous stuff ever does. That means a few literary classics, basically. Even in translation, what English readers see is:

You don't see much that Japanese people are likely to read. No airport novels, no cosy romances, no thrillers, in fact no genre fiction of any kind. Virtually no manga that's designed for older readers. Very little that's particularly Japanese, since these are less accessible to Western readers. A lot of what gets imported fits an exotic model of Japan: serious, elusive literary works, "comic books for children", or those that can be tagged "wacky" or "zany". Those are what the market seems to have decided is the Western viewpoint of Japan, a mixture of honourable Eastern inscrutability and colourful childishness.

Being in Japan is, therefore, an invaluable opportunity to find stuff you would normally never even hear about. You can grab stuff off the displays that are being pushed, which will probably be relatively popular. You can dig into the shelves of second-hand bookshops and load up on cheap odd things. You can even pick up sociolinguistics textbooks in Japanese in the hopes of getting a new perspective on a major interest.

Obviously, another good reason to buy books in Japan is for reading material. Although I can't promise I stuck to it, I maintain that really immersing yourself is the way to benefit most. If you're shopping in Japanese, learning in Japanese and reading in Japanese, that will reinforce itself. You'll get practice in the things you're learning in class, including types of grammar and expression that don't show up much in your daily interactions. After all, shopping tends to be full of keigo and specific terminology. Reading will throw up all kinds of things: casual speech, formal speech, phrases far more long and complex than you'll hear in speech, slang. You'll also encounter words for lots of everyday things that you simply don't end up talking about, because you can't.

Wait, this isn't the premise of this blogpost. Retreat!

So, you're convinced and you just bought a few hundred books. What now?

Obviously, I couldn't cart them back home. I physically wouldn't have been able to lift my suitcase, and I was going on the shinkansen via three cities before I reached the airport. I'd also be changing flights on the way back. No, thanks.

Instead, I went to Japan Post. They sell boxes very cheaply, and I could get 20-30 books into a box. Conveniently, this was the same number I could conveniently carry in my rucksack. I didn't need them in any particular hurry, so I chose surface mail to the UK. By ship, the books would take around three months to arrive. But that's okay. 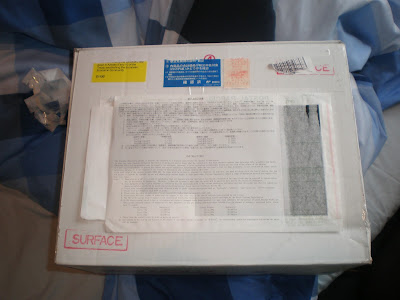 Each box, filled to the brim, cost approximately Y5000, so £26 or USD40. That works out at approximately £1 per book, bringing the price up to about £2, which means that transport included, I was paying about £2-3 for mint condition Japanese books, roughly a quarter of their normal price in the UK. What's more, they would be delivered directly to my house, so no carrying boxes around.

You can find instructions on completing the forms here: How to Fill Out the Parcel Label

I was a bit concerned about the bottom section of the form, labelled G on the link above.

Instructions to be given by hte sender in case of non-delivery of the parcel. Every parcel returned or redirected shall be subject to the postage rates entailed.

It wasn't at all clear (and the staff at Japan Post didn't know) what the timeframe was. In the UK, postal deliveries (and particularly parcels) tend to use "non-delivery" when they mean they weren't able to deliver a parcel once. That is, the postal worker brought it round, but it wouldn't fit through the letterbox (or needed a signature) and nobody was home. Or it took you too long to get to the door. Or, popular rumour suggests, they were in a hurry and couldn't be bothered hauling a parcel out of the van and up your front path. You then get a non-delivery card through your door. You might pick it up from a depot in the middle of nowhere between 5-6am (the only times it appears to be open), or ask them to redeliver it and resign yourself to staying inside next to the front door for three solid days, or arrange delivery to another address.

I was concerned that the parcels here might operate on the same scheme. If they bring one round and nobody's home, would the British postal workers immediately switch to the instructions in section G? Nobody could tell me.

Out of paranoia, I ended up giving instructions to redeliver them to my dad's office, which was the only alternative address I could think of where there would definitely be somebody to receive them. Then, of course, I had to ask him to instruct the staff that any parcels from Japan that came for someone with the same surname as him should be accepted...

In the event, I still can't advise you on how this works, because I was in when each of the parcels arrived. That's the advantage of not having a job, I suppose?

Anyway, I posted my stuff in early December, and a week later went off on my farewell tour. The parcels actually arrived at the end of January, somewhat earlier than I'd expected, which was great. Everything was completely intact, no sign of even being opened at customs. 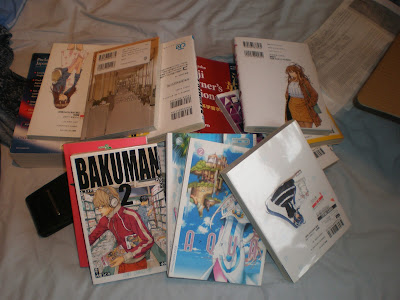 Japan Post is genuinely really good. Honestly, my thought at this point is that I could have sent home even more stuff that I wasn't particularly using at the time - I could quite easily have shipped the majority of my clothes home by this method, for example. Sure, it would have cost a bit of money, but saved a lot of hassle during my final trip around the cities. Unfortunately, due to timing, it wouldn't be possible for me to ship all my Christmas presents home. Bear in mind, though, that I'm pretty sure there are other, highest costs for most kinds of parcel. Typically "printed matter" gets a particularly good rate. Still, travel and transport involve a lot of costs anyway, so it may be worth spending a bit more again just to make yourself comfortable by lightening the load.