Thursday rolls around. Today's breakfast special is pancakes. There's two options, with maple syrup and bacon, or with fruit and créme fraiche. I'm hesitating, weighing up whether I actually want a pancake, and can I get it without créme fraiche, because why would you put white goop that tastes of literally nothing on things? The landlady mistakes this for indecision, and announces that she will bring me both pancakes. This is extremely kind of her, even though I don't actually want two. I end up with a very large breakfast - sadly I didn't have my camera with me.

I've never had bacon and maple syrup together, because... well, for the same reason I haven't had roast beef with chocolate sauce, which is to say, why would you do that? It's not revolting or anything, but it's distinctly weird and I don't plan to repeat it.

My original plan for today was, as suggested by the nice couple last night, to get the bus up to Letacq and get some walking done. When I check the forecast, though, I discover it's going to be the worst possible day for that. It's due to be 30C and above, and blazing sunlight. The walk they suggested is along the coastline, and seems to have very little in the way of shade. It's all countryside, with settlements generally 1km away at a minimum, and I don't know the area at all. In the circumstances, going for a walk by myself seems like an open invitation to heatstroke. Since I'm also prone to migraines induced by bright light, overheating or dehydration, and really don't want to succumb to a hallucinatory episode somewhere I'm also liable to get heatstroke, I decide to leave this for another day.

Instead, I'm going back to St. Helier and aiming to visit Elizabeth Castle. My plan is to get my postcards sent off, then stroll over the causeway late morning, having lunch in the castle café. I hope to have time to reach Le Hogue Bie this afternoon, but we'll see. They all seem to be relatively modest tourist sites here, so an hour or two is generally enough (and that's fine by me).

Well, I get my postcards sent off. I wrote most of them yesterday while lizard-watching, and spend a small fortune buying thirty-odd stamps to Japan, China, Germany and even a few for the UK. The nice lady at the post office is impressed.

Cards posted, I stride down to the seafront, enjoying the breeze and the nice cheerful horror literature podcast playing in my ears, as I head towards the causeway. Which... isn't there.

It turns out that the route to the castle is on a tidal causeway. I had envisioned just a raised path leading there - given the place was occupied by the Germans, and is now a tourist site, and I'd seen photos of people walking there, I had no question in my mind. Never occurred to me to doubt this. I suppose I assumed either that it was situated at the end of a natural outcrop that was walkable, or that a road had been built at some point. But no. You can only reach the castle on footwhen the tide is down; and because it's currently a neap tide, it won't be possible today or tomorrow.

This seems like the kind of information that should be made incredibly prominent everywhere, because generally people don't go around assuming that major tourist destinations might randomly be inaccessible depending on astronomic cycles. Don't bury that information in a detail paragraph somewhere in a guidebook - put it on the freaking sign. If all you have is a sign saying "castle this way", I tend to assume - not, I think, unreasonably - that if I go in that direction, I will be able to reach the castle.

After much bewildered wandering around, I discover that what you need to do instead is get a little shuttle ferry. There are two, but they don't seem to coordinate efforts, I think they just take it in turns to go or something? Or maybe one is a backup. The next available ferry seat turns out to be in 45 minutes away, by which point I was hoping to be in a tearoom in the castle, since the walk would only take about 10 minutes. I end up going around the corner to La Fregate, where I find a scone and an apple to keep me going. It's not particularly restful, because I'm stressing about getting to the castle and my plans being thrown off, but it is at least in the shade.

I finally manage to get on a ferry around 12.20. By this point, I'm guessing I won't be able to do much else today. Being tied to the ferries is meaning a lot of wasted time sitting around, so I might as well make the most of the castle. 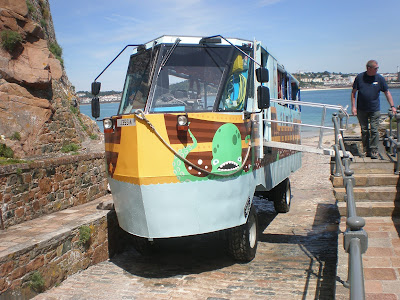 The ferry is pretty cool, though. There's a safety video inside, which is done by a group of historical recreationists being the local militia, and is really pretty gun as these things go. 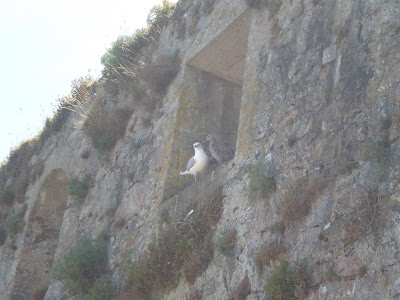 Some seagulls are nesting in the window, the first thing I saw when I arrived. 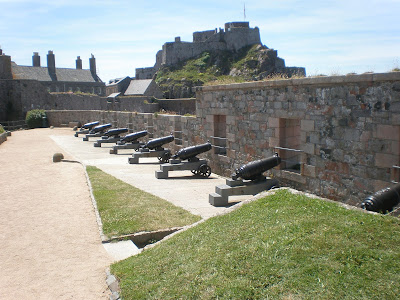 All the cannon lined up. 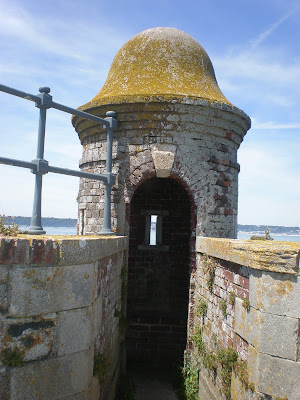 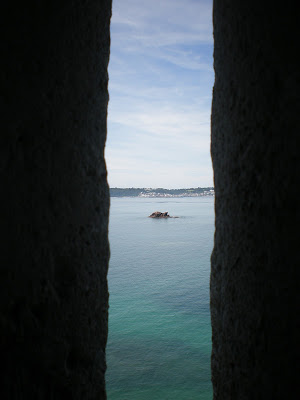 Just a nice little view of an islet through the tower window. It's hard to convey just how sunny it is here. I felt really sorry for the soldiers training in this heat on this baking, open courtyard. 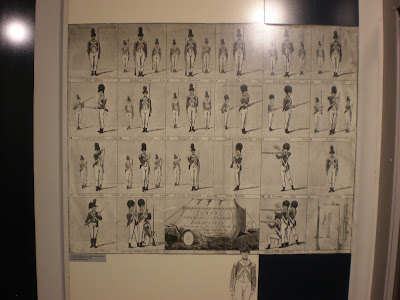 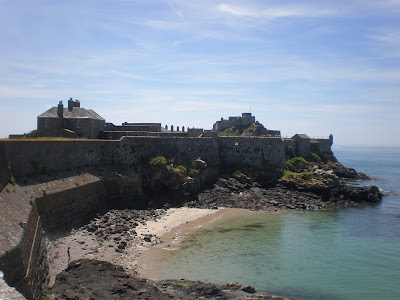 There are lovely beaches around here, although they look hard to get to. 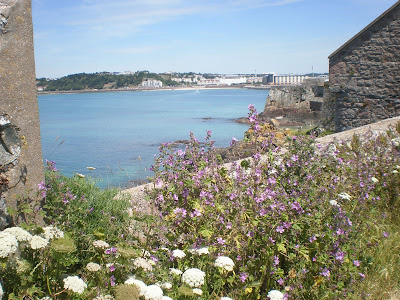 Flowers now sprout all over the castle grounds. Like Mont Orgueil, it's probably a good habitat for rare species, although it's been disturbed more recently by the war. 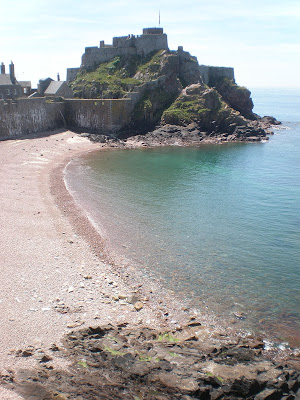 This is a pretty tourist-brochure-y photo right here.

The castle is an odd experience - there's the old, esoteric parts that you come to expect from castles, but it's cut through with modernisations, because it was occupied by the Germans when they took over the island in the second world war. As a result, concrete is everywhere. This feels very odd, but it's probably not significantly different from how castles used to change over the centuries. Most castles have been heavily redesigned over their lives, it's just that in most cases they became redundant as defences so long ago that we don't really notice these discrepancies. The stone/concrete distinction just happens to be broad enough and modern enough to be obvious. 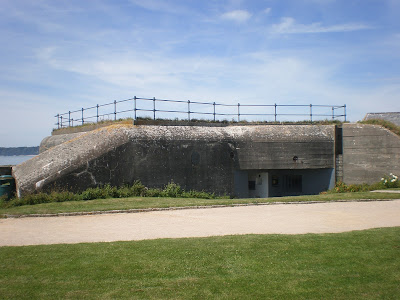 A concrete bunker has been added here.

The work on the castle was mostly done by slave labour, it seems. Things were really pretty bad on Jersey, one of the last places to be freed. I assume that for the Allies, the work and risk required to recapture a small and very well-defended outpost was inefficient compared to the gains that could be made on the mainland for the same effort. As a result, the population were starving and in very bad straits. 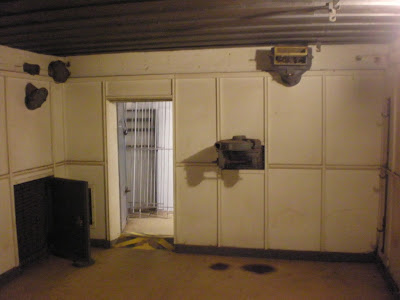 Although of course I'm very sorry for the forced labourers, I also feel quite sorry for the German soldiers seeing this. The castle was set up with a full hospital, central heating and other advanced facilities, but this would not be a fun place to spend your time either. They must also have been in constant fear of the Allies landing, and of the population who presumably hated their guts. 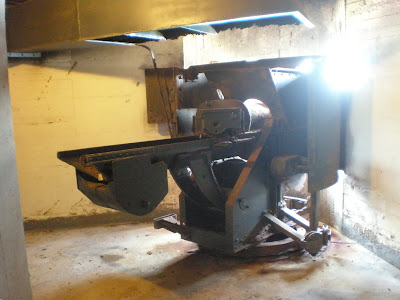 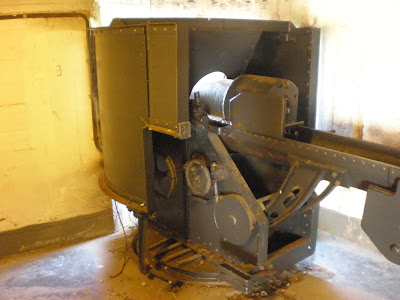 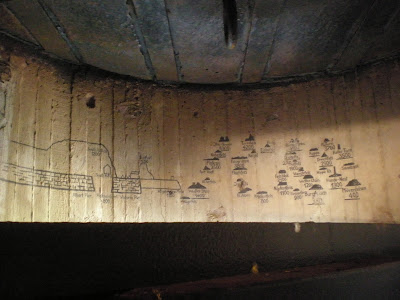 This is a ranging chart for the gunners, showing nearby islets and rocks to help them judge the ballistics needed to hit an enemy vessel.

It's quite exhausting wandering around the castle. It's interesting enough, but I have seen an awful lot of castles in my time, to be honest. The heat is so intense that I'm very glad of the brief trips inside, though the bunker-style sections are really cramped and unpleasant. It's too hot to sit outside and enjoy reading or anything, so I go to the cafe, seeking lunch.

Here, following on from my experience at Mont Orgueil, I realise that cafes in Jersey museums cannot be depended on as a source of food. It's basically tea, coffee and cake here. That's great for snacks, and I gladly order a cup of tea, but there's not really much that's lunchable here, and I am trying not to live on cake. There are some sandwiches (from what I remember) but I don't trust bought sandwiches not to have butter, mayonnaise and other inedibles in.

I suppose I'm basically used to a National Trust style of visitor centre, where there are typically little cafe-restaurants attached to historic sites, catering (literally!) to people who are coming for a day out. These do tend to provide at least simple meals, and in many cases quite substantial ones. The Jersey tourist market is apparently different, perhaps due to the scale of the island, which means people will often be visiting from only a few minutes' travel away and you're always close to an actual restaurant. I'd be quite interested in the actual economics, but alas, I have no way of knowing what they are.

It's also possible, of course, that the space and facilities available simply don't allow them to do full meals. For Elizabeth Castle, at least, that seems unlikely, since it must have had a substantial kitchen for the German troops. Still, that might be unusable by now, or just not comply with modern hygiene regulations.

In the case of Elizabeth Castle, that's a bit of a problem, since you're completely cut off from sources of food by the sea! It's clearly not sensible to go back for lunch and come over again, so I decide to slightly extend my wanderings and then simply head back for lunch. This pretty much puts the kibosh on visiting anywhere else today - it's already well past two, and by the time I've tracked down an eatery and got some food, it'll be far too late to visit a museum that's a bus journey away.

I take the ferry back, and from what I remember, I end up eating in a Marks & Spencer café. Afterwards, I find a slightly-less sunny bit of seafront and just lounge on the grass, listening to my podcasts and dozing gently. It's quite pleasant and restful. I eventually head back to Sweet Heaven, a cafe I end up visiting half a dozen times during my trip to Jersey. 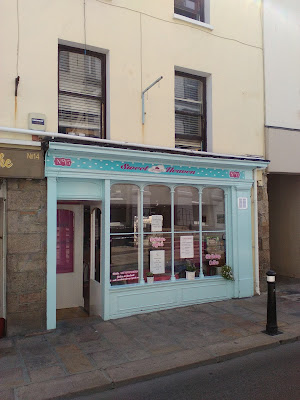 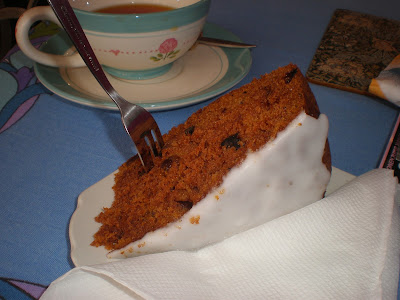 Spiced fruit cake. It was delicious.

I head back to St. Aubin, and sketch a bit in the gardens. I ate pretty late already, but I do need food eventually, and decide to just go to the nearby Murray's for a bite, as they seem to do small and simple meals. I order a baked potato and some salad. It turns out the potato comes with salad, and it's the same salad, which means I eat an inordinate quantity of leaves alongside my potato. Still, it's all healthy stuff, right? There's also a very pleasant non-alcoholic beer.

One thing has come up quite frequently on this trip - I'm wondering, where do the local residents go when they want a relatively simple meal out? Or in fact, do the demographics (it seems pretty posh to me) and the continental influence combine to mean that isn't really a concern? I know that my family and I would soon find the All Bistros All The Time setup a bit overwhelming, and would welcome some simpler food that wasn't three courses and rich sauces, but perhaps Jersey people don't feel that way. In fairness, there are pizza shops and takeaways, so it's not all expensive; what I'm not seeing here is what we'd call pub grub, which is to say, a relatively simple and nutritious cooked meal. If you want to eat healthily but cheaply here, I'm not really seeing many options.

Email ThisBlogThis!Share to TwitterShare to FacebookShare to Pinterest
Labels: Jersey