It is, once again, excessively hot. I am exhausted. It's mostly down to the weather, which has been relentlessly warm, and I'm not great at that (see: everything I wrote about Japan ever). To some extent, though, it's also because I'm having to work fairly hard to find ways to occupy myself. Touristing is relatively hard work, and requires a fair amount of planning because the places are scattered around the island. I can't simply crash in my room and surf the internet or watch films, because that requires sitting in a very specific spot in the garden where I can hope to be connected about 15% of the time. Also, that pesky RSI is stopping me from just writing. So! Today I thought I'd head off to the Hamptonne Country Life Museum. I'm hoping this will be a cool, indoorsy place where I can drink tea and muse gently. I'm also taking my laptop, so that if worse comes to worst I can do some flashcards or something.

Resolution made, I take the bus through Millbrook, where I remember as we pass it St Matthew’s Glass Church, which I intended to find out about but forgot. Millbrook is the place to change buses for the HCL anyway, so I hop off at next stop and wander back. The church is... not quite what I expected. I'd been envisioning a church that was actually glass - maybe a glittering stained-glass marvel along the lines of Paddy's Wigwam, or a chapel made of huge panes of glass and full of light? Perhaps an ordinary church fill to the brim with elaborate glass ornaments? But getting a brown sign isn't a sign of being a major monument, but a place of possible interest to tourists. We have to take scale into account. Jersey is a relatively small place, so it's not likely to have a large number of major attractions: the handful of castles and museums it has easily meet quota. The Glass Church doesn't pretend to be anything major, I just leaped to that conclusion because it's mentioned. As a small and isolated place with a relatively small population, little interesting places are going to seem more prominent than they might in a major urban area. 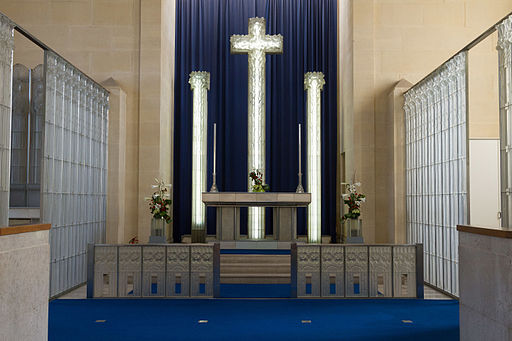 So, the Glass Church is a place where some fixtures are made of glass. It's perfectly pleasant, worth sticking your head round, but not particularly fascinating to be honest unless you're really into church architecture. 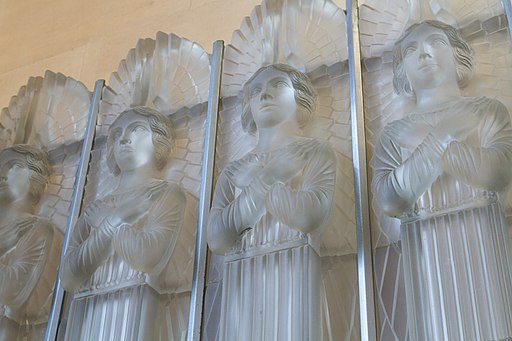 Having done that, I decide to get te bus to the HCL. This is where things fall apart, because after much traipsing I finally find a bus stop - which is to say, a pole. The stops on the other side of the road are proper stone shelters, in the shade, with seats. They look really comfortable. This is a notice nailed to a pole in the sunniest part of the street. It is deeply uninformative. It lists the numbers of buses, with the ultimate destinations. I’m sure it’s useful if you’re a local, but there is no indication whatsoever of where any of these buses actually go along the way. Diligently, I try looking at the four different maps I own, but this doesn’t enlighten me, because none of these ultimate destinations appear on the maps. Apparently they are either too unimportant, or they're the name of a specific part of a small town. This leaves the option of either stopping every bus which passes to ask if they go where I want, or walking.

Looking at the timetable, it will be over an hour before all possible bus numbers have passed, and so on average it's likely to take me at least half an hour of waiting. It's really very hot. After much consideration I try to walk. It’s only a couple of miles, right?

This is a mistake.

I find a road sign indicating the Hamptonne Country Life Museum, and bein walking. After a few yards, the pavements disappear. Hey, who needs pavements? It’s not as though humans walk. Certainly not in Jersey, it would seem. The road becomes steep, and increasingly winding. As I try to navigate around a corner, two huge lorries thunder past from opposite sides, drivers gawping at me in incomprehension. I am, shall we say, uncomfortable with this. The road seems to grow steeper as I walk, until I might be traipsing up a cliff. Heat shimmers off the road. Sharp-angled driveways appear behind me, disgorging unexpected vehicles. I feel increasingly like an FPS protagonist surrounded by spawn points.

After a few minutes of this, I give up and turn around for my own safety.

I was really hoping the Millbrook change would be a sensible move; it means only taking the bus halfway to St. Helier, which means only spending 20 minutes rather than the full 40 minutes needed to cover to cover the 5ish miles between the two towns.*

* Horrifyingly, I can reliably run this distance faster than the bus covers it.

Now it looks as if unless you know exactly what you’re doing, the only sensible thing to do is go to St. H and get the bus there. But this walking thing is obviously not going to be enjoyable whatsoever. I give up. Stuff this visiting places lark; if they can’t be bothered to make it easy for tourists (a supposedly significant part of their economy) to get to places, I will not visit them. The museum sounded vaguely interesting, but I’m not risking life and limb to get there due to lack of information on the buses. I'm really quite fed up about this, but I’m just going to St. Helier to sit in a café or something. Defeatist, perhaps. I could go to St. Helier and get the bus from there, but by that point it would be lunchtime. My experiences at Castle Elizabeth warn me against expecting to eat at a tourist attraction in Jersey. If I wait until after lunch, by the time I can get to the museum the place will be practically ready to close. I’m going to give up on visiting anything and just go somewhere to read. Well done, Jersey.

So I do. I tote my bag over to the library, and study flashcards in the cool. I'm actually incredibly tired, from the heat and from the effort of touristing. Always having to think up ways to occupy myself and search for meals is exhausting; the meals in particular have been difficult, because it’s too hot for me to eat the big restauranty meals, and the choice in most places has been extremely limited, so there's been a lot of traipsing around.

I make a token effort to try going to the museum in the afternoon, after a lightish meal at M&S, and then just give up. I don’t really want to go to another museum. I’m hot and exhausted. If I were at home, I’d just curl up and try to nap. I’m basically stuck in town until I get a bus to the hotel, then I’ll be stuck in the hotel, so I try to make the best of it and just go back to the library. And that’s basically it.

I spend the day studying, reading and listening to podcasts. Rather than scout around for food yet again, I have sudden inspiration and pick up some bits from M&S again. I’m once again astounded at the dearth of bread rolls in Jersey,* but do find a couple here, and some fruit salad. That’s about all I can imagine eating. Despite being far milder than Fukuoka, the weather has done a number on me.

It's mysteriously like Japan, possibly from joint French influence? I can find large loaves of bread here, which are far more than I could possibly eat, but small items seem to be exclusively brioche. I've nothing against brioche, but I'm not going to make a sandwich out of it, because it's cake. And I do try not to eat cake for every meal.

In the evening, when it’s cooled off a bit, I have a stroll around. I never did see the supposed coastal path south-west of St Aubin, and there’s still no sign of it (in both senses of the word), but I wander through the streets a bit. I watch the first half of Tokyo Sonata, which I’ve had lying around from Lovefilm for about three months now and never got round to. As I had feared, it’s rather depressing, but not overwhelmingly so, and I’ll probably finish it.

I never did. I kept it for another couple of months, and never mustered the enthusiasm to watch the rest. I started once, realised the rest of it was just going to be more of the same, and gave up after yet another scene of family arguments. The synopsis I read makes me glad I did. I've already got a taste of the film, and my tolerance for things which are stylish but grim is quite low. The last part of the film simply seems to be weird. I can't be bothered. I sent it back.

Everyone else has disappeared by now, but I venture back out into the garden. It’s dark, cool, and peaceful, apart from the inescapable gurring of traffic and distant whooping from someone or other. The church below stands out as a dark and elegant shape, painted in chocolate light and shadow by a streetlamp. There are lights strung out all along the bay as it curves off to St. Helier and melts away into the distant Elizabeth Castle. St. Aubin’s own little islet fort juts out into the sea to the right, giving them the look of two lovers calling to one another across the bay.

A faint rain begins to fall, speckling my skin softly like the kisses of ghosts. The day is over.