So a few weeks ago,* I was delighted to hear that one of my classmates from GenkiJACS would be visiting London! Regular readers may remember M-san of okonomiyaki fame, who is also Miho-san of internet fame. The word "charming" was practically invented for Miho-san, so of course I was happy to take a trip down to London and do some touristing with her and a couple of her friends.

* I started writing this post nearer the time, but it's actually four months ago now.

For any non-British Isles readers, London is nowhere near my hometown (which is near Liverpool) - it's about two hundred miles away. It's also horrifically expensive to go to London, because (inexplicably in my view) it's incredibly popular. To make the most of the time, I decided to go the previous evening so we could meet up in the morning, and also so I wouldn't be spending half a day travelling there and back.

After much frustrating searching, I happened upon the Swinton Hotel. It does exactly what it says on the tin: it's a cheap, no frills hotel that's near King's Cross. Providing what you need is a place to sleep and a bathroom, it's got you covered. No photos this time: honestly, it wouldn't be worth it. It looks like a very small room with a small bed in it, and the kind of carpet they put in very cheap hotels. It was fine. 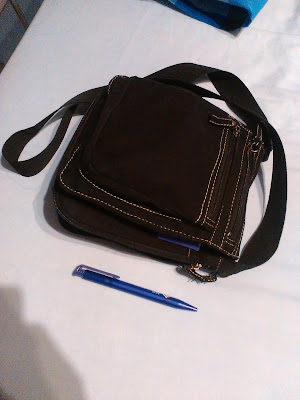 Here's my overnight bag. I am super good at travelling light when I don't need a laptop, which is basically never. For one night though, no problem.

In need of food, I ventured out into the London streets and discovered it was actually quite difficult. I tend to find eating out for one is a problem in the UK; you're usually okay if you can find a quiet pub, but restaurants per se are a bit unfriendly in my experience. It's understandable from a purely financial viewpoint - one of you means a table being used up for only one person's order, and none of the group conspiracy dynamics that result in ordering multiple courses or lots of alcohol. Not very welcoming though. I've had too many experiences of food being cleared away moments after I finished it, and staff giving off obvious signals that they want you to leave. In quiet towns it's not generally a problem, but this was very much not one.

Thankfully, in my wanderings past King's Cross I spotted Chozen Noodle. At this moment, I felt like katsukare (rice with a meat cutlet in curry sauce) was exactly what I needed. 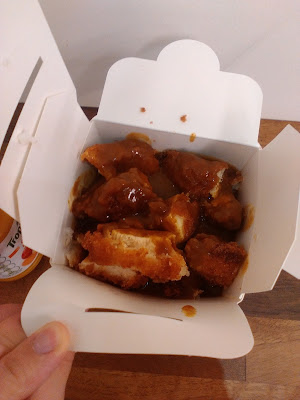 Tasted fine; I don't think the box really works well for katsukare though. Instead of having a balance of rice and cutlet to switch between, you have a gauntlet of cutlet to eat through before you reach any rice. Also, the curry sauce naturally seeps down through the whole box, meaning you don't have a bland ricey counterbalance to the rich spicy cutlet, you have a box of rice and cutlet that's spicy the whole way down. It's okay, it's just suboptimal. You want a wide, flat box for this, or two compartments or something. 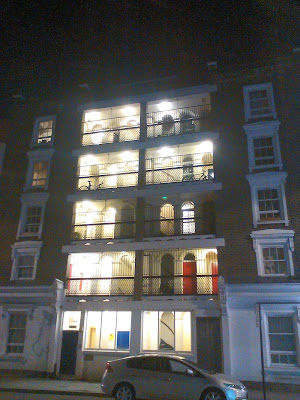 I'm guessing this is the London equivalent of a one-room mansion. I just liked the look of it.

So the next morning, I headed off towards our rendezvous, the Mug House near London Bridge. I should have gone inside for a cuppa really, because there was unfortunately a bit of a delay - ah, missed opportunities! Still, I was watching some people in period military dress gathering outside Southwark Cathedral to be filmed for... something or other. 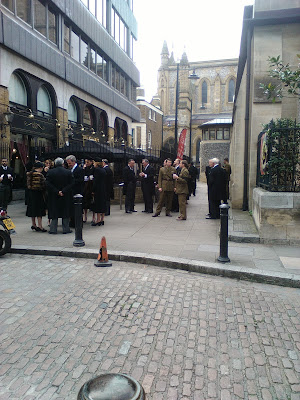 The Thames was grey and murky, though it had thankfully stopped raining. This is exactly what I expect rivers, and indeed the sea, to look like - growing up in north-west Britain, you learn that bodies of water are a greyish-brown colour, and it comes as something of a surprise the first time you go somewhere sunnier and learn that that business of colouring in water as blue isn't so bizarre after all. 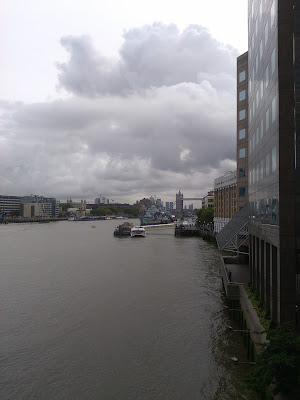 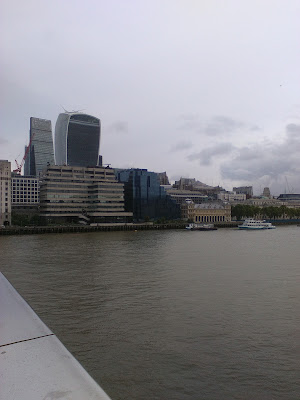 Apart from the occasional distinctive historical building, London waterfront pretty much looks like the waterfront in most cities I remember.

Miho-san managed to fight her way to me in the end, bringing a retinue of two very friendly lads, T and S. Linguistic confusion occurred as I tried to work out whether I was supposed to speak Japanese, English or German, and we eventually settled on an erratic mixture of all three. 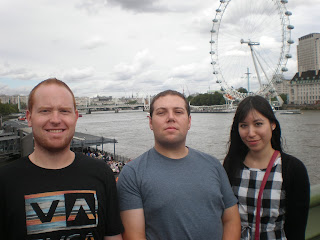 また会えて嬉しかったです！All three of these people are just ridiculously nice, even when you speak to them in a mixture of hilariously bad German and fast, Scouse-accented English and look confused any time they say anything. ラッキーな僕ね。 Es tut mir echt Leid...

Luckily I could just speak Japanese to Miho-san, and it was so very nice to get that opportunity again. I don't think I did too badly, all things considered. 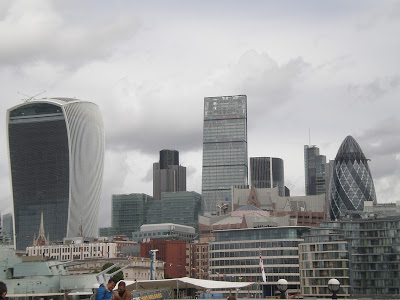 Some of these are probably famous or something, I dunno. I think the pointy one is the Gerkin? Not sure about the thing that looks like a cartoon version of a speaker. Knowing the names of random tower blocks in a city hundreds of miles away has never been an important skill for me.

We decided to go for a walk around near the Thames, just seeing a few sites and having some lunch, all very relaxed. There were a couple of possible visitor attractions, but nothing set in stone. The weather was a bit uncertain too, so we couldn't really have any serious plans. It was a bit drab with the grey skies, but good company covers a multitude of sins. 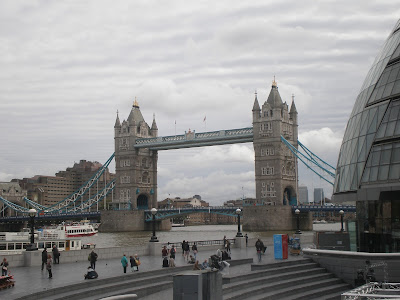 Oh hey it's that bridge. This falls into the category of "places in London I actually recognise". You can actually climb up the bridge and walk across the top floor, but they wanted to charge us quite a bit of money for the privilege of... seeing things from a bit higher up, as far as I can tell? And honestly, looking down from heights is not really my forte, so I was happy nobody seemed interested. 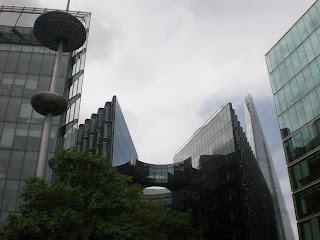 I thought this arrangement of buildings seemed kind of cool. Miho-san tells me the pointy one is the Shard? I am in no way unmanned by the fact that a visitor from another country is better at identifying landmarks in my capital city than I am. 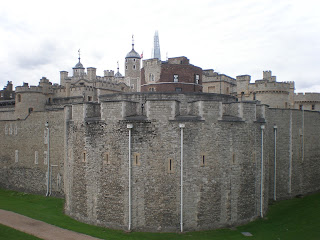 Hoorah, old stuff! I'm better at old stuff. This place is the (outer wall of) the Tower of London, famous prison, last pre-execution residence of lots of famous people, and likely site of the murder of the Princes in the Tower. It's also quite a cool building, although we didn't go inside. 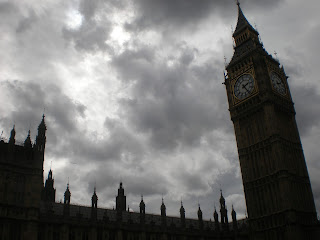 It's not a visit to London unless you go to the Houses of Parliament and take a photo of Big Ben. I'm really liking the brooding sky here, for which my non-existent photography skills bear no credit whatsoever. It has that almost-cool look about it, ready to be photoshopped into a first album cover or the jacket of a self-published YA paranormal romance novel. 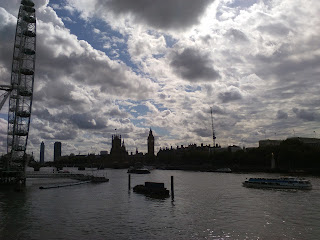 Also pretty cool, I think? I like the rippling, ragged blue line that tears through the clouds, as though they're parting (they were in fact just all sweeping overhead). This was only about 4pm in August, too! Shocking.

We wanted to walk down past the London Eye, and it was pleasant enough. The huge queues and outrageous prices immediately quashed any thought of actually going on it! Going round on a big wheel costs (as I recall) about £25 per person, so about £50 per hour. That really doesn't seem remotely like a good use of money. Even a professional theatre company is what, maybe £20 for a three-hour performance? Although maybe not in London! Still, a lot of people are obviously very keen. Sometimes, a memorable experience is all you want.

Instead, we strolled down the river, where various buskers were performing. There was a street magician doing an escape act with lots of chains, and we stayed to watch. I was struck as I watched by just what a high proportion of the time in these acts is spent just talking. I suppose the thing is, it only takes a couple of minutes to actually do a trick, but it'd be hard to do tricks continuously for as long as buskers keep going. You'd end up repeating yourself. Talking is a lot easier, and of course it gives you the chance to build up anticipation as the crowd wonder what on earth it is you are planning to do. It doesn't have to be that clever, either: I think even if your act isn't very good, mild curiosity can build up via a kind of stubborn irritation into a determination to just see the wretched trick already, and that helps you form a sizeable crowd.

These acts were decent, though. As well as the escape artist, we watched a couple of guys doing some bike acrobatics, and later on we stopped to watch a juggling act. They all put on a reasonable performance. No pictures, though, sorry. 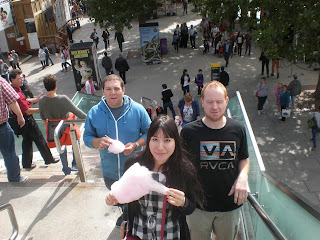 When it was nice, it really was nice! My friends bought candyfloss to eat as we walked - I find it a bit too sickly so I passed. I love sweet things, I just tend to prefer cake or chocolate... sugar alone is too much for me.

A bit later, we spotted a busker in the street, and stopped to listen. She was playing some chilled instrumental stuff that I really liked. S sat on a monument nearby, and for some reason, this ended up with the other three of us quietly devising a French art film around the two of them. I forgot it all, though :( I took a video, but sadly the sound quality is pretty bad due to lots of traffic.


Luckily, I also took her card! It turns out this lady is Starcraxy Chan, and you can find some much better videos on her YouTube channel, as well as recordings on SoundCloud. I couldn't identify this song, though. If you can, leave a comment!

Our wanderings eventually took us to something even I could recognise: the Globe! It seems like they have a pretty decent programme on, including some international versions. No time to go in, though. I'd like to one day, so I suppose that's sort of equivalent to the London Eye thing - I can see some Shakespeare basically anywhere, and going to the Globe would be expensive, but it's that bit more special. 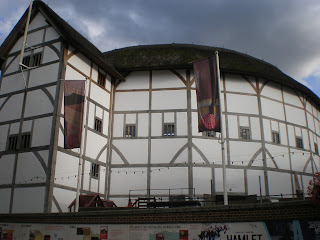 We ended up back at Southwark, and although we wandered through a cool market, didn't immediately spot anywhere that was open and where we could get food conveniently. We ended up going to Nando's for some simple, but really quite tasty food. Mmm, cold milk.

Eventually I had to head off to get my train back. The others were staying in London, so they came to see me off at the station. It was really nice to see Miho-san again, and to meet S and T. And I don't feel like I was a total failure as a guide, despite my ignorance of London. 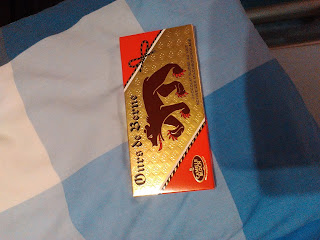 Sweet Miho-san brought me お土産 (omiyage, a little "souvenir" gift)! I shared it with my parents, and it was amazingly delicious. Okay, I started sharing it with my parents. They had a little bit. I was going to share it all, I'll have you know, only I suddenly had to move house and I only re-discovered it a few days ago. Still delicious! Swiss Chocolate 1, Ravages of Time 0.