When last we left our hero (a cotton-fibre sleeping mattress), it had at last completed its lengthy journey from Japan to my flat, and was being aired in the sun. Now read on...

On Wednesday 30th September, my futon arrives. After carefully inspecting, admiring, airing and preparing it, I chuck it on the floor and sleep on it.

It's great. For reference, I have for the past few weeks been sleeping on, variously:

So you will understand that my initial joy is perhaps a slight overreaction. But it really is a huge improvement, and of course it's a relief to know that I have actually finished one of the many problems I'm currently juggling. Bed: achieved.

Each morning, I lovingly drape my futon over the airing rack to bask in the sun, like a huge, floppy lizard.

By Saturday, the skies have darkened, and the Indian summer is apparently coming to an end. No more sunlight streaming gloriously through the windows to air my futon. I leave it out to air anyway, just on general principles.

By the end of the week, I'm feeling quite achey all over. I don't know whether this is (as threated by some friends) my body deciding it doesn't like the futon after all. However, I already had some aches and pains left over from a few weeks ago (some kind of long-lasting muscle strain), which are being re-invigorated by my current situation. I'm doing a job that right now involves a fair amount of lifting, bending and twisting; I'm also walking a few miles a day carrying a heavy laptop-filled rucksack because my house isn't yet online and obviously that's completely unbearable. So I'm going to trust that the futon is not responsible.

I am a bit concerned that the colder, damper weather will make it harder to get my futon aired and fluffy, and need to ask my Japanese friends for advice.

By early November, I have gradually recovered from most of my aches, and no longer worry that the futon is responsible. That being said, I have realised that my normal sleeping posture doesn't quite work as well in a futon. The most comfortable option is sleeping on my back, where I feel well-supported. Rolling over to my front is a definite mistake; the firm futon doesn't give much, which means I quickly end up with my head tilted back uncomfortably. Unlike in a bed, I can't comfortably lie in the futon and browse the web or type a quick email. It's just for sleeping. This is probably better for me, to be honest.

* I should probably apologise, particularly to any Japanese friends who may be reading (are you? really?), for having a section title that's a pun and isn't even in English. But I'm not going to.

I am trying very hard to maintain good bedding discipline, and tidy away my futon every day. I air the futon itself whenever I'm not actually drying clothes on my clothes horse, and otherwise roll it away. Sometimes more tidily than others. My bedding takes up a remarkably small amount of space when it's properly folded. 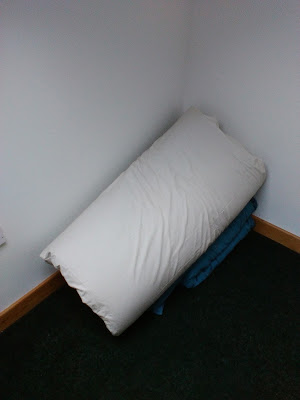 The neat way, so far from what I normally achieve!

At this point, I'd like to officially recommend my futon, because I'm completely satisfied with it so far. I will happily recommend Japanese Futon.co.uk. As I mentioned last time, the service was excellent; not only prompt, but also very helpful and friendly when I wanted to make sudden changes to delivery. The futon itself seems to be very good quality and is an elegant piece, though sadly obscured by its futon cover most of the time (the original sea blue is so lush though).

The website for the company is a little bit sparse, and I did spend quite a while reading everything and thinking hard before placing my order, but the experience was extremely good and I have no complaints whatsoever. They're a small(?) family business, so slick websites aren't going to be the main focus.

Problems that aren't with futons but are vaguely associated

I am finding that I'm reverting back to my old sleeping habits though - which is to say, faffing about on a computer when I'm supposed to be sleeping. It's not very comfortable, but... well, I keep a computer within easy reach to play the white noise I need to get to sleep. Since I now live on a main road on a street full of takeaways and my sideroad is the designated parking point for everyone visiting the takeaways, it's not exactly tranquil. Plus, ambulances. The white noise coming from my laptop covers that up enough for me to switch, and drop, off.

Regrettably, this means I tend to reach out for the computer and "just quickly" have a look at something, or write something, or... you get the picture. And an hour later I finally turn over ready to sleep.

None of this can fairly be ascribed to my futon, which is admirably fulfulling its role of being a fabric bag full of cotton fibres suitable for sleeping on. While I would probably appreciate an intelligent robo-futon that put me to bed at a sensible time, so far that is unrealistic. I imagine it won't be long, though.

Another issue I run into is that Sleep Cycle no longer works very well for me. The futon doesn't wobble around in the same way as a mattress, it just shifts ever so slightly, and this seems to affect the phone's ability to track my movements. Apparently there's a sound-based option, though, so I need to investigate that. Until Futon Day, I found Sleep Cycle really good for waking up feeling rested, despite having a history of sleep problems. I can thoroughly recommend it. It's far, far better than my old alarm clock for waking at the right time - although I must admit that having the alarm clock at the far end of my room, in an awkward location, was perhaps better for forcing me to actually get out of bed. In my new flat, though, the walls appear to be almost as washiki as my bed (which is to say, they resemble paper) and this would undoubtedly make me very unpopular.

The thing is... futons aren't really intended for using directly on a hard wooden floor. And they don't air out particularly well that way, because air can't pass underneath them. For these reasons, and also because I just like it, I've been vaguely thinking about tatami for a while.

Tatami is a kind of grass-fibre mat build around wooden frames. This is the stuff you see in pictures of traditional Japanese homes, and is a major reason for not wearing shoes indoors. It's also one of the reasons why people in Japan can kneel a lot better than Brits - tatami gives a little underfoot, and so is much kinder to the bony shin than hard wooden boards or tile floors. Without wishing to be annoying, I have to confess I really like it. There's something very pleasant about it as a surface to stand on, and it also smells like new-mown hay. What's not to like?

And so my next step, having secured and tested my futon to my satisfaction, will be to investigate mats. Bizarrely, I expect this to be significantly easier than obtaining an actual futon.