Hi there! Anyone following this blog in real time - wow, you're patient. So I'm about to post some things I started writing a full year ago. There's reasons for it. Partly it's that I've spent a lot of time working on some other projects that have come up in the meanwhile, and all my blogs have been on hold. Partly, continuing health issues coupled with family stuff and starting a new job, which has meant I just haven't had very much energy to give the blog the time it needs to be vaguely interesting. I mean, if I just wanted to post bad attempts at pretty pictures, I'd do it on Instagram. I know what you all read this for is amusement at my misfortunes, and how can they be funny unless I devote myself to painting you a rich word-picture of each event?

Anyway, I will now begin posting these, in the hope that starting will make me more likely to actually get through them. Enjoy.

It's a long time since I went to China.

Long ago, in fact, that this blog didn't exist. I bought my digital camera specifically for that trip - the most expensive thing I'd ever owned at the time (graduating from a very elderly film camera). It was nine years ago in fact; or, as we Millennials measure these things, five jobs and six addresses ago.

But I've been wondering what it's like, and I have a number of Chinese friends, and one of them just recently returned to China. I wasn't sure what I was doing with my holidays this year, and it seems a shame to have spent all this time trying to learn Chinese and not actually visit. So, well, I am.

It's fairly well-planned out. After much complicated negotiation with various friends, I'm going to spend a week in Xi'an visiting two friends, then take the plane down to Japan to revisit my Fukuokan friends and to explore a little more. I'd originally thought of spending the whole time in China (much cheaper) but I don't feel confident enough to explore on my own, unlike Japan. On the other hand, a single week is a complete waste given the heavy jetlag and the cost of the intercontinental flights. So two countries it is. I'll leave Manchester in the evening, and arrive in Xi'an the following evening, ready to sleep - this worked well last time and should help minimise the jet lag.

A week or so before the journey begins, I am finally prescribed some antidepressants. I begin taking them immediately, which means the key adjustment period will take place while I am staying in a variety of unfamiliar accommodation, travelling enormous distances, violently altering my sleeping pattern, switching diet, operating in a second language, and exposed to a huge range of new and exciting illnesses. Luckily, Sertraline adaptation doesn't cause any inconvenient side-effects like exhaustion, severe nausea, overstimulation or insomnia.

Sorry, what was that? I'm holding it upside down? Oh, so I am. My, that is an extensive list of side-effects. Well... pants.

On a grey Thursday morning, stuffing Peptobismol into my gob at regular intervals like some kind of junkie hamster, I get on the bus to the station, where I find the trains to Manchester airport are delayed by Storm Doris. 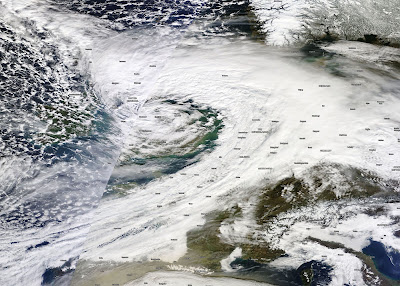 With all trains listed as indefinitely delayed, I eventually board one to Manchester itself where I plan to change. We travel sloooowly through the damp, windy countryside, eventually reaching Manchester Piccadilly. As I cross the platform to await the airport train, speakers grimly announce that trains originating from Piccadilly are cancelled and instruct passengers to return home. But mine isn't one of those. I wait.

The next train is delayed. The amount it is delayed ticks back slowly, until it passes the time when the following train is due to arrive. This one repeats the process. There are now three trains queued up to be the next on arriving, always due in a few minutes, but like "tomorrow", that time never arrive.

After about an hour waiting in the cold winds, occasionally pestering an unfortunate security guard with no insight into the weather or the machinations of rail company management, we begin to filter out towards the taxis. I gather four random passers-by and we head to the airport. It's a long ride, but thankfully not too expensive between us. I have four hours until my flight, plenty of time. Other travellers are reading out updates which boast of how the Manchester pilots are bravely defying the storm to continue flights as normal.

After the usual bafflement about exactly how to navigate the floors and passages, I calmly pull my suitcase into the check-in area and glance at the board. There are precisely two flights cancelled. But one of them is mine.

I line up for the information desk, and pass my tickets to the busy staff. After much typing, they offer me a flight the following morning. This is exactly what I didn't want - morning flights, arriving in the morning, which result in the absolute maximum jetlag. Plus, my second Chinese friend is only visiting for the weekend and I'll miss half her visit. I try to haggle, but basically anything earlier has already been booked out.

They hand me fresh travel information and tell me to go home. I point out that I can't. The trains from Manchester were being cancelled; okay, this is a certain amount of extrapolation on my part, but I have zero faith in the ability of the railways to get me home today. Moreover, even if I did, I don't think it's physically possible to reach the airport for 7am the following day. In the face of my determination they decide to book me a hotel room, and also give me a voucher for tea and a snack.

Shortly, a group of us are escorted to a minibus and driven for long, long minutes to Altrincham, a place notable only for the fact that it's a shibboleth for regionality. No, I'm not telling you how it's pronounced... the hotel is okay, but this was really, really not how I wanted to be spending this time. I begin messaging my Chinese friends (and my family) with news of the delays. I also ask both my travel agent and my Xi'an friend to contact my hotel, to let them know that although I won't be arriving on the expected day, I do still need them to keep the room for me! 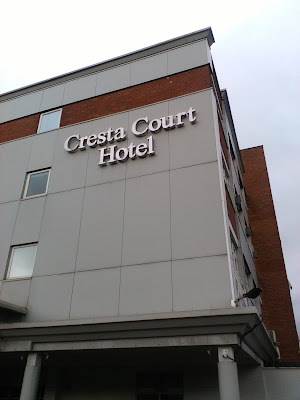 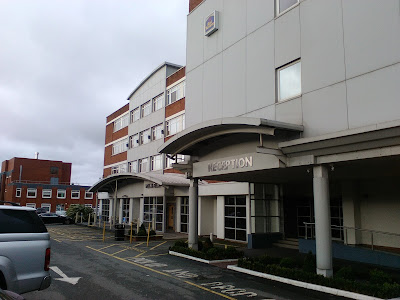 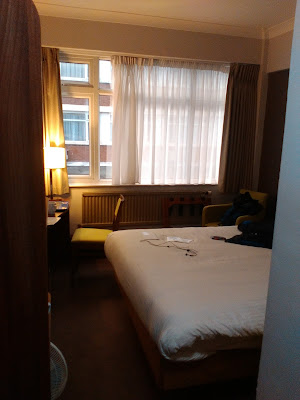 The evening is slightly enlivened by our meal, as they pack a group of us strandees into a dining room and provide a special meal. We bond over our misfortune and the evening passes fairly pleasantly. Eventually I retire to my room, where the situation preys on my mind enough that I am still awake at 3am. Okay, my new medication is also playing a role here.

At long last, with just a few hours' sleep behind me, I drag myself downstairs. A taxi arrives, but the driver says the name it's booked under doesn't match either our airline or the hotel. After several minutes of confusion we establish that it is in fact ours and we're allowed to go.

With my flights entirely rearranged, I'm now due to fly with only a single change, via Beijing. This means at least an opportunity to sleep. As soon as breakfast is over, I bundle myself up and attempt to sleep. And again. And a little more. Then I try watching a film, before trying to sleep again. 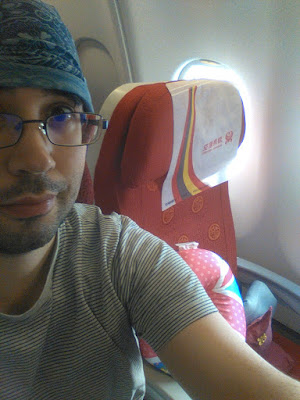 They do at least manage to get me a spare seat, since my original flight was for a seat with extra legroom. Featured: the revolting neck pillow I bought at the airport.

Twelve hours later, we unload in Beijing, having watched three films (a prologue to Journey to the West, Dr Strange, plus another I can't actually remember) and slept for no discernible amount of time. It's 5am and I'm due to be on another plane in two hours' time. 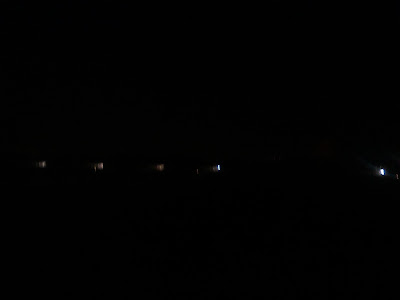 I'm transferring here, but I took the time to check the instructions for exactly what that entails. Basically it's almost entirely the same as arriving; you have to go through immigration. There is a long, long queue for immigration and not many staff. A small group of us foreigners forms and reassure each other about the process.

Half an hour later, we have moved fifteen feet. We are not even yet at the official queue. It's seeming likely I won't get my flight. I'm too tired to be fazed or alarmed by this, but I do want to inform my friend who's supposed to pick me up at 9am. I try to connect to the internet, but in a stroke of genius, this requires a Chinese mobile number, which none of us have. In frustration I watch the time tick away, unable to think of a way to stop my friend from leaving. I am also rapidly dehydrating.

As my flight departs from Beijing, we are exchanging stories of previous foreign encounters, and are getting quite close to the front of the queue. Two and a half hours after arriving, I am finally through the door and head towards the transfer area. A bored man desultorily feeds my rucksack through a scanner, apparently without interest in the result, and nods impatiently at me. I'm somewhat alarmed by what may have happened to my suitcase in the two hours since I arrived, but find a helpful member of staff who assures me it'll have been collected. I manage to collect my suitcase from the luggage area, then wander around for quite a while trying to find the way to the transfers section, since half the building is still locked up. Finally, I reach the check-in desks. My company is not here.

Two members of staff and a twenty-minute walk later, I'm in the next terminal and finally track down Hainan Airlines, who I wasn't originally flying with at all. I'm not especially confident about how this is going to go, but I manage to explain somehow and they find me another flight. It leaves at noon, so I'll arrive five hours later than scheduled. 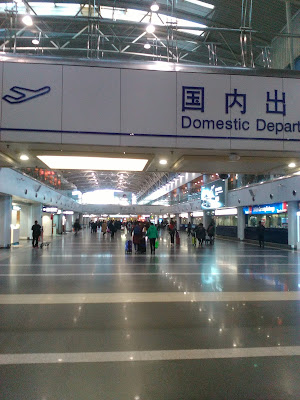 Eventually I manage to purchase a small drink, and get someone to show me the special machine where you can scan your passport to get a code for the wi-fi. It's a shame they didn't think to put one in the immigration queue because this must be a pretty common occurrence. I finally, finally manage to contact my friend, who is of course already on the non-stop bus to the airport and has nearly arrived. But I can at least apologise.

Duties over, I set an alarm for an hour's time, lie down on a hard wooden bench with my luggage lovingly enfolded in my arms, and pass blissfully into unconsciousness for a regrettably short spell.

This sort of thing is what's frustrating about air travel. I'm not allowed to check in my luggage until two hours before the flight, but need to leave at least an hour to get through security. This means I can't sleep for three hours and then do the whole thing, but neither can I check in my luggage and then sleep until shortly before my flight, either before or after security.

Eventually I pass through into the departure lounge, and fly uneventfully to Xi'an. HT is waiting for me. It's about 1pm and I have slept for 4 hours in the past 48. But I'm finally here. 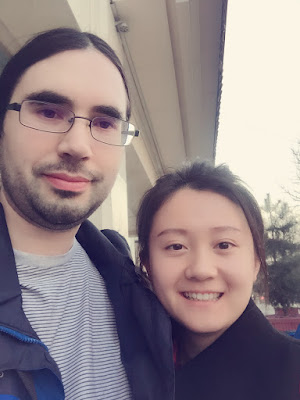 We head sleepily back into the city on a minibus, which takes about an hour. At long last, I reach my hotel and trundle my luggage to the desk, presenting my passport. After a long muttered conversation, the staff turn to my friend to announce that they are unable to find any record whatsoever of my booking.