When last we left our very unheroic hero, he had arrived in Xi'an a full day late, without sleeping, appallingly jetlagged, and in the early stages of adjusting to powerful mind-affecting medication, to find his hotel politely reporting they had never heard of him.

Well, you may say. Well. Well, well. Um. I mean, I had definitely made a booking, and had money taken for the booking, and I have a fair amount of confidence that STA Travel weren't scamming me.* On the other hand, these nice people couldn't find a record of my booking or payment. What a conundrum, you might say; rather a pickle, isn't it?

*they had of course used an intermediary, and in theory they could have been scamming me; but I was far too tired, nauseous and language-shocked to think of that.

Obviously I'm not about to do anything outrageous, like throw a tantrum, or burst into floods of tears, or demand to speak to the manager, or proclaim that I was being treated appallingly, or threaten to write to the Telegraph, or insist that they give me a room, or suggest that they might be wrong, or imply in any way that they might personally be at fault, or look cross, or sigh heavily. I must confess I do at one stage raise one eyebrow and show them my booking printout, but in my defence, I am very tired and assume this was all some simple misunderstanding, and no actual injury was intended; though I do of course later send an anonymous basket of flowers.

Anyway, I look sheepish and tug my right earlobe a couple of times, and apologise several times for troubling them, and murmur in an embarrassed way that there seems to have been some kind of mistake. These moments are when you realise you're abroad, because this does not send the entire staff into a frenzy of anxious activity; nor does a grizzled veteran named Pam or Tom emerge from a secret abode, plonk a brick-red cuppa down on the desk and stare thoughtfully at my passport for a minute, before rummaging in a hitherto-unnoticed drawer and producing a document that explains and resolves the whole affair. In Japan, too, this behaviour would probably have caused the silent flaring of emergency lights in a back room, from whence a crack team of customer service marines would have sallied forth to deal with the seething client before any kind of rampage could ensue. In China, for some incomprehensible reason, they appear to take my mild demeanour and friendly tone as an indication that I'm not stressed or irate about the latest in a string of exhausting failures, and we can discuss the whole situation at length.

My Chinese is definitely not up to this. I have probably never been happier to have a native speaker on hand to help. Between us we relay information back and forth for a good fifteen minutes, comparing different screens and sets of paperwork - I dig out my laptop and fire that up in case it helped (it didn't). Eventually they offer to give me the room, since I do seem to have all the right information, for which I assume HT's silver tongue and obvious trustworthiness is responsible. Personally I tend to have more of a "police are anxious to speak to this Caucasian male seen in the area" vibe. I agree to email my travel agent and ask them to provide more information so we can resolve this in the morning; one of those occasions where the 8-hour time difference causes problems!

After my very late arrival, HT suggests we go for a walk. We head to the nearby city centre; it has a concentration of interesting historical areas that I remember well from my previous trip. The sun is slipping lower in the sky, casting soft yellow light.

Here's my route: you can sort of follow along, although China and Google maps don't play well, so I suggest you use Baidu maps instead for street view exploring. 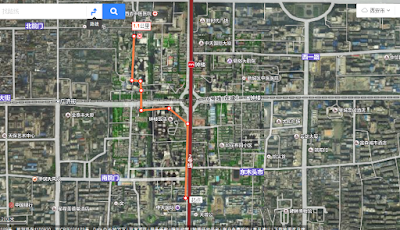 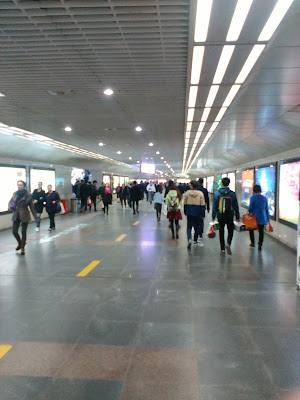 The underpass that encircles the heart of the Old City 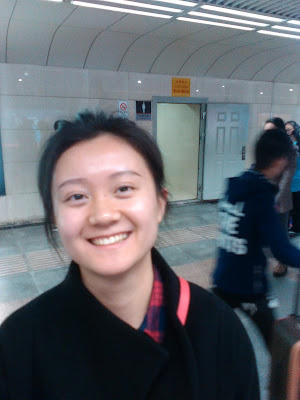 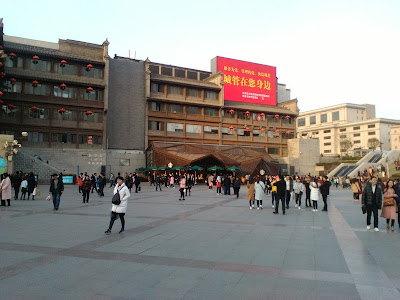 Left: The central square by the Xi'an Bell Tower. Right: Archival footage! I took this back in 2008, at the same Starbucks. The lady is Joanne, who was on another volunteer programme. One day I'll get around to blogging about that trip... 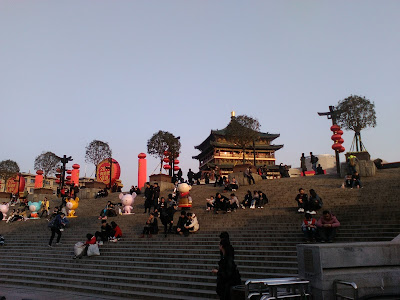 Looking up towards the Bell Tower. 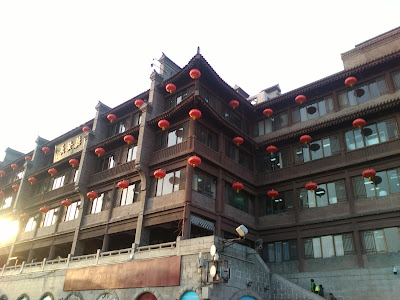 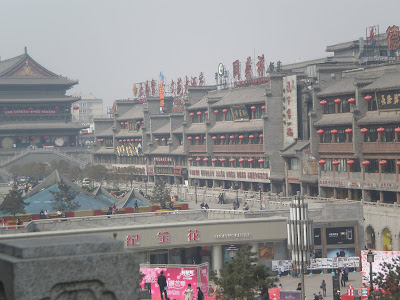 I believe this is a hotel and/or restaurant in the Bell Tower Square. Left: 2017. Right: A view from the bridge in 2008. 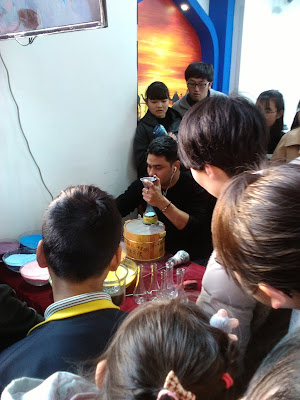 This man is creating elaborate pictures inside a bottle by very careful application of sand. 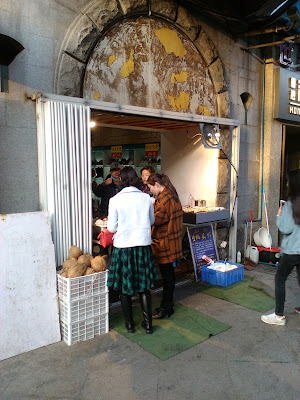 How many different kinds of shop is this? And more importantly, why? I count: shoes, bubble tea, whole coconuts, and dried fish products. There's nothing wrong with that, it's just... not a combination I would have predicted, you know?

This district has a high concentration of Muslim residents; I assume this partly relates to Xi'an's historical role in the Silk Road, bringing traders from across Eurasia. It has all kinds of stalls and shops, and is a hotspot in the evenings. I've heard it's also a hotspot for pickpockets, so as an exhausted tourist I try to take good care. 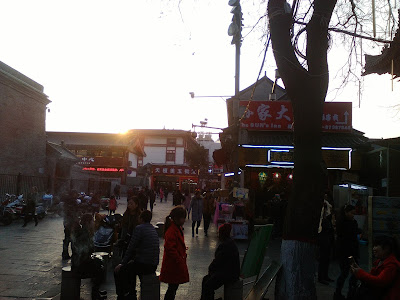 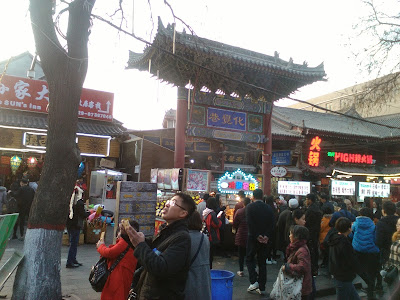 It's also busy most of the time, day and night. There are plenty of souvenir shops here was well, and an excitingly windy covered market; but this time we don't go in there. 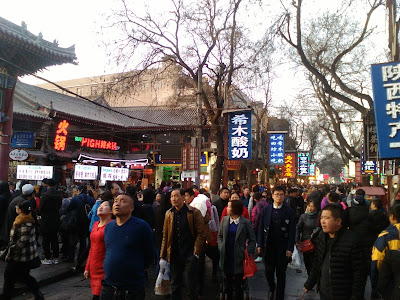 This is not particularly busy by the standards of the street. 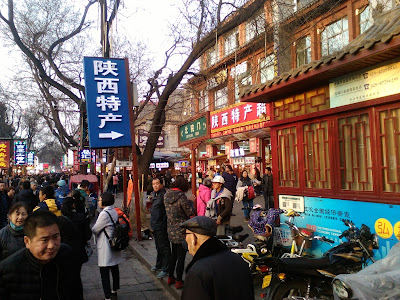 Quite a lot of the stalls are dedicated to food. Below is an artisan making traditional sweets, kneading and stretching and twisting dough hung on a hook. It will be cut up and rolled in various combinations of nuts, spices, sugar and other flavourings. On the left you can see deep-fried squid and crustaceans, which are eaten like a lollipop. 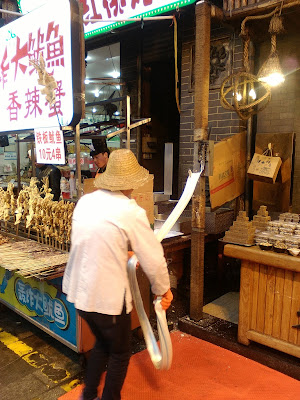 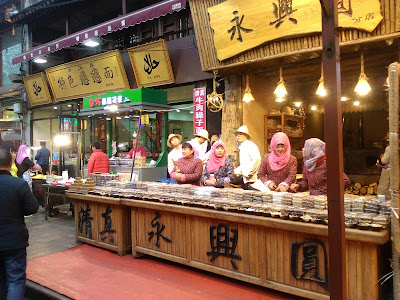 These ladies run a sweet stall - quite a popular one as you can tell by the number of staff.

After a wander round, HT takes me for a meal. She recommends a regional delicacy called Majiang Liangpi (麻酱凉皮, Májiàng liángpí). These are cold noodles, served with a sauce based around black sesame. I try some, because it's not like I get the opportunity often. Unfortunately, between exhaustion and the unfamiliar taste, I find I'm not able to eat very much. I know sesame paste is one of the more acquired tastes in Chinese cooking, so I'd like to try and get used to it. 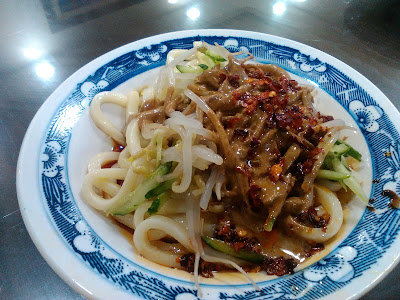 I think the green place in the centre is the entrance to the restaurant, but it's hard to be sure. 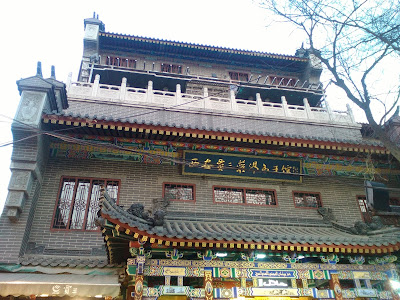 This is the upper part of just one of the buildings that line the Muslim Quarter. There are lots of these striking buildings near the city centre. I love the architecture. 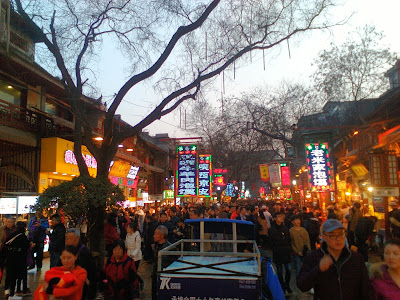 As the evening sets in, it starts to get busy - people are finishing work, or deciding to head out with the children, and congregating here to take advantage of all the food stalls. 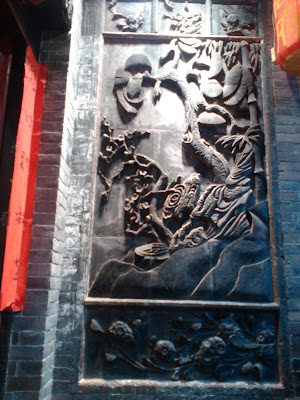 We decide to call it an evening, and HT kindly escorts me back to the hotel. On the way I take this photo, to help show off the sheer sense of vastness that I always get in China - the cities are so big, so tall, and although Japan was similar in some ways, Xi'an also has (unusually?) some big wide open spaces that highlight it even more. I suppose the areas of clustered tall buildings have a claustrophobic feel, whereas when there's a break in them, it gives you the space to more fully grasp the size of what you're dealing with?

I got way too attached to this function.