Currying favour (or not)

This week, as I sloooowly adapt to the climate and make increasing efforts to eat a bit more in a Japanese style, I decided to follow the advice of the marvellous Pear, specifically this exclusive personal tip.

Personal recommendations for easy, substantial, one-dish-meal Japanese food: JAPANESE CURRY. The curry base comes in ready-made blocks, you only need one heat source to make it, and the finished curry can be chilled for days or frozen for months. It takes all kinds of meat and vegetables. Fruit is good in it, too, specially apple. You can eat it with rice or noodles. It's basically perfect. But that might be too rich and hot for you, even if it's though that eating exactly those kinds of things give you energy to combat the summer fatigue.
Pear, 2014 [personal communication]

Anything that will help with the heat sounds good to me, and although I'm not sure about the richness, I've been adding pepper and firebird chillies to, um, most of my food, for several years now. Somewhat baffled how to approach this in a practical, food-buying sense, I turned to some random person I found on the internet. She did a taste test and found Torokeru curry the best of the lot, so I let that sway me. My local Sunny had only a couple of options, one being some kind of cream thing and one a beef curry, so I opted for the beef. 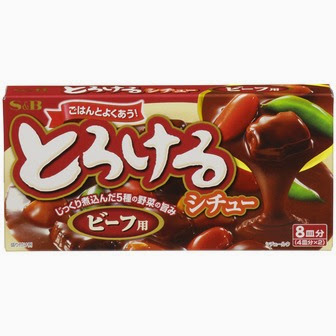 First step was, of course, to translate the instructions. 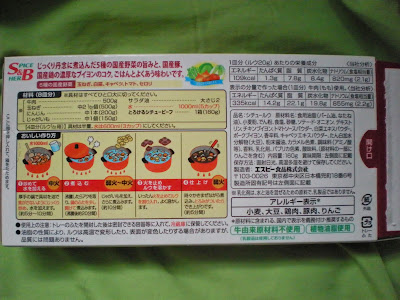 One slapdash but probably-viable translation later, we're ready to go. Except I don't have all the ingredients they want. I'd like to at least try this the way they suggest, so cue trip to the supa.

(a couple of days later)

Okay, I actually had to eat up some other things and running out of time, so I ended up putting off the curry for a bit, but here we are.

I'm going to be making some slight modifications to the recipe for a couple of reasons. One is size - I don't have much storage here and have various things in the fridge, so I can't make the full amount suggested. Also, beef is really expensive, and it would set me back about £7 just to get a half-quantity from what I've seen, so again, until I'm really confident this is good stuff, I'm making do with chicken. It'll be fine. Thirdly, there are some small substitutions - for which read, I have halved the amount of onion and replaced it with daikon.

This is, I think, the first meal I've made using onion in about three years, when I last made a pot of Scouse. It's also about only the second recipe I've consented to acquire onion for. In case these statements aren't clear, I really don't like onion. It's not as bad as garlic, which I will flat-out refuse to eat where possible, but I've never acquired the slightest taste for it or worked out why everyone, in virtually every country in the world, insists on putting the wretched root into just about every single dish. That and tomato.

Did I mention I also don't like tomato? It seems ironic that just the about the only three vegetables I don't like are the ones most commonly used in food...

In which our hero cooks

The cooking phase goes a little bit wobby when I realise you're supposed to add the potatos to the stew after everything else. Having sautéed all the veg together in one pan, I then spent several minutes holding a frying pan full of veg in one hand while painstakingly shifting everything but the potatoes into the stew pan. I recommend not doing this. Always read ahead! 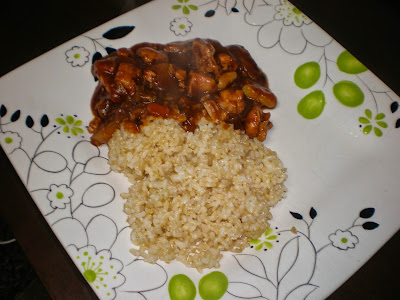 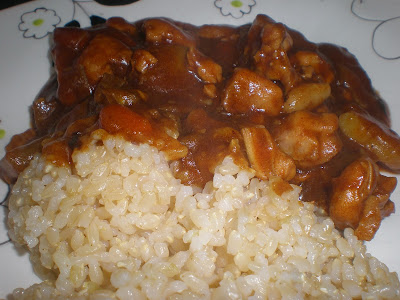 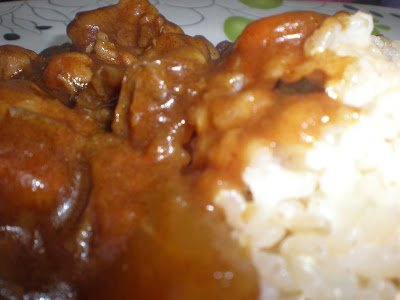 Completed curry looks pretty good to me. It's also pretty tasty, fairly rich and filling, but without the kind of exaggerated overwhelming flavours that off-the-shelf meals or sauces sometimes carry. Something about it does say "bought" to me - I'm not sure if there's actually some material difference in homemade vs. shop-bought meals, or if it's psychological, although I feel like it's partly a texture thing. Anyway! It's nice enough, though I was a bit surprised that it wasn't spicy..?

I was 100% correct about chicken being a perfectly viable substitute for beef; it would probably have been slightly richer in flavour with beef, but I didn't feel there was anything lacking. The onion was tolerable, possible due to the sautéeing leaching out some of the more objectionable linger-in-the-throatness that I resent so much. All in all, not bad.

The spicy thing raised some suspicions. On careful inspection, I realise that it's actually some kind of stew mix, not curry. The clue is in the word "stew" on the front of the pack. The fiendish manufacturers confounded me by being Japanese, and thus spelling it as "Shichuu" in katakana - the white "シチュー" on the right. Although I can sort of read Japanese now, it's definitely something that requires attention, so I didn't pick up the clue just with a passing glance as I would have in English, and apparently I didn't notice or get round to reading that bit. I think, with it being so close to the company name (the huge bit) I assumed it was part of that, or a brand name or something? And I just assumed that, what with looking like the curry pack featured in the taste test, it must be beef curry. D'oh! Better luck next time...

On the plus side, I have at least a couple of portions left of a perfectly decent meal, so that's minimal cooking for the next two days.