I've just about finished packing for tomorrow. A few things (like this laptop!) will need to be tucked in first thing tomorrow, ready to head out for breakfast at delightful Manchester Airport. I'm taking one 20kg suitcase, one day rucksack and a laptop bag, which has caused a bit of consternation in some circles. The thing is though, 6 months is a slightly odd time to be going for. It's long enough that it makes sense to buy a few things in Japan if I need them, rather than carry them over (with hassle and extra cost) just on the off-chance. I need some new clothes already, so it makes sense to take a week's supply and supplement it in Japan, rather than trying to buy stuff here and then needing to transport it. On the other hand, it's not long enough to make it worth sending over large amounts of stuff that I can manage without - and let us not forget the expected titchiness of my room.

Speaking of which, a bit of research has turned up some hopefully-handy info. I discovered that the Delco Homes apartments listed by GenkiJACS here look very, very similar to the ones listed by Fukuoka YMCA here! And more importantly, while it's clearly not the exact same rooms being discussed, some of the photos on the YMCA site help clear up the GenkiJACS photos.

Above: Image from Google Street View of the address from GenkiJACS
Below: Image from YMCA of the Delco Homes apartments 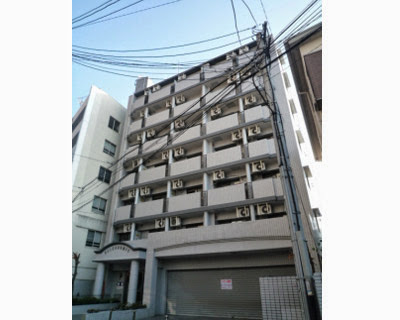 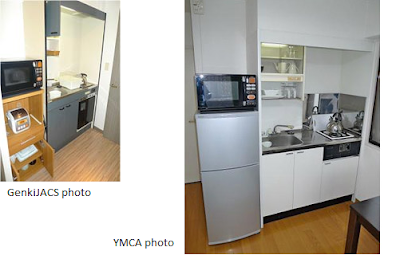 These are clearly not the same apartment, but, from looking at the YMCA photo with its better angle and without a box in the way, it seems pretty obvious that the thing in the back is a kettle resting on a hob. While obviously not a guarantee, this suggests that there may actually be a hob in my apartment, rather than just a microwave and rice cooker, which would make a massive difference.

On the downside, it would seem to make getting a cuppa much more hassle than it needs to be, but swings and roundabouts, right?

The plan for tonight is to get a few hours' sleep with the hope that I'll pass out on the plane for at least a little while. I just heard today that GenkiJACS have changed a couple of arrangements, which is just slightly unnerving: the apartment manager is actually going to meet me, rather than leaving a key in a deposit box, which has upsides and downsides. Also, they want to hold placement tests on Sunday avvy rather than Monday morning. Neither is very serious, but I find it a little jarring to have last-minute changes like this.