This will be the absolute last time I make flippant remarks about bread in Japan.[1]

The British are, I would say, still a nation of bread-eaters. Sandwiches or soup-and-a-roll are staples of our diet. Moving outside that little realm, we also enjoy a vast array of pies, pasties, puddings, scones, cakes, biscuits, and so on and so forth. Personally, I have bread for at least one meal most days. It's convenient, apart from anything else. Often I bake my own bread, which is dense and heavy and strongly resembles Terry Pratchett's dwarf bread in its satiating properties and ability to dent the floor if carelessly dropped.

Moving to Japan should, of course be no problem. As I'd picked up from previous reading and watching, you can hardly move for bakeries here. Bunk a brick and you have a pretty good chance of it ending up atop a bag of Brown Bread.

Of course, this is essentially a vast and sinister deception run by (one must assume) some shadowy council of robed figures from the tunnels deep beneath Mt. Fuji. Products called パン (pan, from the French pain) are indeed ubiquitous here, but we must remember that we live in a world where Americans are permitted, in the full light of day, to sell beverages called "beer" and even to list "tea" on menus. Which is to say, nothing is sacred.

パン most strongly resembles the worst excesses of a reluctant French baker of more than usually delicate sensibilities and no teeth, who had always entertained the dream of being a marshmallow-maker. Brown Bread would, in dear old Blighty, be confiscated under the Trades Descriptions Act, and would have a hard time trying to pass itself off as the sort of budget white sliced normally sold in particularly undiscriminating pound shops. I have not, as yet, felt strong enough to attempt the White Bread. One can, with considerable difficulty, locate wholemeal bread, which is sold in gift-wrapped packs of three slices at around a pound a pop, making it the most expensive bread I have ever consumed; however, it does at least make a bit of toast that can look you in the eye. 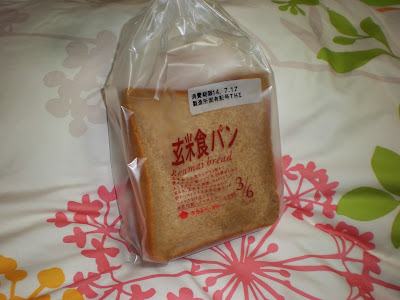 Anyway, surrounded by all this mysterious bread-like stuff that other people were happily consuming, I thought there must presumably be something in it. So I decided I would embark on a voyage of culinary exploration by, at regular but unspecified intervals from now on, going into a bakery and stuffing myself with cake. These great sacrifices I make for you, the loyal reader, for your eludication and delight. To steel myself for the forthcoming ordeal I began with the least-threatening of the foodstuffs on display, also avoiding those which seemed to consist more of cream than of crumb.

Today's offerings are from Vie de France bakery, which mysteriously features neither boules nor rioting lorry drivers in its décor (okay, I will stop making fun of the French)[2]: 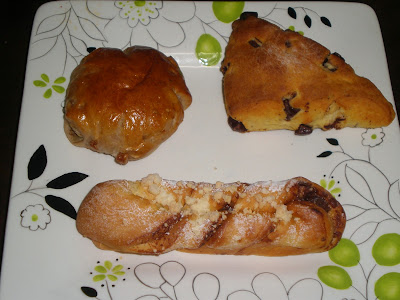 The Twist looked delicious, but was surprisingly bland in the end. I kept half-expecting to bite into a cream-filled centre (a dismaying prospect) because it evoked that sort of slightly nondescript cake that tends to get used in products that are primarily interested in their filling or coating. I didn't particularly notice the cinnamon, although chunks of chocolate were pleasantly prominent. Texturewise it resembled something like an eclair, neither moist nor crumbly but very slightly stretchy, which did make it tidy to eat. A perfectly acceptable cake, but not one I'll be rushing to eat again.

The scone is the most British thing I have encountered since coming here, easily outstripping the British Pub I passed the other day and the deviant Werther's Originals I saw this afternoon.

In what sort of horrific parallel universe is the Werther's Original a caramel-filled chocolate!? One shudders to think of it.

It is a robust cake that's neither crumbly nor squidgy, but holds together well allowing for a comfortable bite without collapsing. The exterior is satisfyingly crusty but neither hard nor tough. Sizeable chunks of chocolate are embedded throughout, lending a rich and mellow tang to the pleasantly semi-sweet body of the cake. It's absolutely a munching scone rather than something you'd have with jam and cream, but I eat a lot of scones that way anyway. My only criticism is that is seems a bit dry, possibly due to having been left out all day. Would Eat Again.

This most closely resembles a hot cross bun (the bought kind) in its chewiness and high-glaze crust, but is a bit less squishy than those tend to be. It has the odd piece of walnut in, and is very slightly sweet, but otherwise doesn't really taste of anything. It's entirely edible, but again, I can't see myself bothering to buy another one.

Having spent several hours walking around in tropical sunshine and 99% humidity, I also grabbed a bottle of ice-cold Pocari Sweat to refresh myself on the train.

It's a mild "sports drink" with a pleasantly nondescript taste of mild grapefruit, not noticeably sweet and not carbonated. I found it deliciously soothing, and lacking the sickliness or aftertastes of so many soft drinks. It's got much less sugar than even fruit juice so also less likely to make you feel full or be bad for your teeth. Sounds good to me. Mine cost about 90p, but it's going to be rather pricier in the UK, I suspect, although I have seen it somewhere.