Today has been a complicated mixture. I ended up going to bed after midnight, woke up a couple of times, and eventually dragged myself out of bed around 9am. This was a deliberate decision as I didn't have class until the afternoon. Being pretty dopey, the morning slipped away via breakfast and homework.

So far I've had very little luck working out what to do here. I'm eager to find something social to do that isn't tied to the school, for a few reasons. One, most people won't stay long and I'd like some acquaintances who don't change every few weeks, speak English (or German) 99% of the time, and aren't my teachers. Two, psychologically it's good to have some separation. Three, I'd like to actually have some interaction with actual Japan while I'm here, not just with the school, which is a sort of artificial environment. Shopping doesn't really cut it.

The problem is that actually finding anything is proving difficult. In the UK, you can have exactly the same problem, but there I know how to go about finding things: library noticeboards, mentions in the local paper, parish and church noticeboards, community centres, FE colleges and so on. There's also web searching, and I know what to look for. In Japan, I don't know the cultural setup for this kind of thing, what things might be called, what groups might actually exist, or where to find the information. The school isn't able to help hugely, presumably as they have fewer long-term students than I had understood. They managed to point me at some kind of centre that apparently hosts various clubs; however, when I went there and chatted a bit, all I got was stuff about volunteering to work in a garden or some such thing. Web searching is difficult because you need specific keywords: I don't really know what terminology to use in Japanese, and the word for society/club (会) is really common in virtually any word to do with collaboration, like "association", "conversation", and most inconveniently, "company".

I went to a sort of community centre place kind of thing and had a poke around. They did have various leaflets and posters, but these mostly seem to be about events. Having cast an eye over the place, there was no particular person obvious to ask, and it had a pretty official-looking, local council sort of feel, which made me worry that it wasn't the right place to be. That, plus my fairly awkward experiences so far in asking people about this stuff, plus my general lack of self-confidence, led to me giving up and going home.

Class was okay, and I was hardly late despite a rush to get there. I did get pretty tired and was yawning my head off, but we revised some important grammar points and moved onto some actual new stuff - this was nice as most of what we've done so far I already covered to some extent with Naoko-sensei. We're also slightly tying together some points we've covered separately, which I appreciate.

After a long, hot day (33C in the shade, minimum 85% humidity) I wasn't sure I was up for much else, which was a shame as I'd signed up for a meal in the evening. Obviously, having paid and already being there, I wasn't going to cancel, and a fair number of people showed up. There was what felt like a long and confusing walk for a sizeable group, and I felt a bit self-conscious of being inconvenient for other passers-by - a turnaround from my usual experience in Oxford.

The meal was my first trip to any kind of restaurant in Japan, so I appreciated that for a start. It was an all-you-can-eat place, so no concerns about paying. To my dismay, I ended up crammed in the far corner surrounded by other students, far from the Japanese people who'd come along. The others were perfectly pleasant and I had a reasonable chat with them, but it wasn't ideal. One reason for this was I ended up next to the ordering phone, so was expected to call through with drink and food orders. I did this precisely once, wracked with nerves because nobody would actually explain the protocol to me, and I'm fairly sure I was rude in some way or other. However, drinks did arrive. 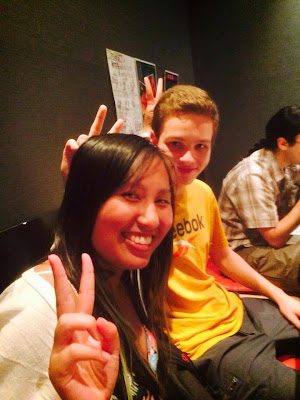 Once the food menu was passed around, I became firm. Nobody near me was able (or possibly, willing) to try reading it, so it was down to me. The menu was handwritten in blocky pen, making it even harder to read than usual. I was pleased to recognise a few kanji (thanks, Chinese!) and managed the kana fairly well, but there were only two items I actually knew how to pronounce. Rather than phoning, I buttonholed a waiter who came past and pointed at things.

The food was mostly all-you-can-eat chicken wings, which was tasty enough, if a far cry from my usual diet. We also managed to nab a small amount of rice and potatoes, which helped balance out the meat. There were various delicious coatings that I couldn't identify. It reminded me, inevitably, of Tom and Marina's pre-wedding meal, except for the lack of Hawaiian shirts and no impending prospect of giving a speech. The Japanese members of the group made a valiant attempt to converse with all of us, which basically involved shouting across the room and huge amounts of misunderstanding. Well tried, though.

After the meal, folks were keen to go to karaoke. Since I've never been, despite being tired, I said I'd tag along. However, our group quickly became separated. There was much faffing about what to do: it was decided we'd go to a park (I thought I might as well), then someone needed to make a phone call, and we ended up going to a cafe instead. This was much easier than the restaurant, and between the walk and the cafe I got to chat a reasonable amount to both the friendly Japanese ladies who'd stayed with our group, as well as the other students. Everyone was very pleasant and I enjoyed having such a varied group of people to talk to, from high school students to a member of the French army, all with interesting things to say.

Incidentally, the cafe was Travel Cafe, part of the Hakata Green Tenjin. I mention it as the staff were very pleasant, it seemed nice and peaceful at 9-10pm, and they served a very nice cup of Assam - I could probably have got milk but didn't like to push it.

After the drinks, we decided to head to Ōhori Park anyway. I've been there several times, to run, but thought it closed around 7pm. It seems like that's just the boating and concession stands, though, as plenty of other people were there. We wandered around a bit before the others peeled off to head home. I know my way back and it was only another 25 mins, nor did I know of any better options, so I just walked back. The remaining half of the circuit seemed a lot longer when I wasn't running!

It was a very pleasant close to the evening. Having been tired out and stressed at various times, the night-time park and walk soothed away my cares. We passed a heron stalking in a stream, which reminded me vividly of the one resident under my bridge in Oxford. We walked past some kind of abandoned site or something, full of columns now overgrown with trees and plants, eerie and lovely in the dark; cicadas sang thrummingly through the night air. Lights rippled on the waters of the lake, and dark figures jogged past in silence. After the others left, I strode my way through the rest of the park to head home. There were still plenty of people around: a man lying on a bench and staring at the lake; another man squatting peacefully cross-legged by the sea, with the branches hanging low about his head and the waves rippling gently at his feet, just ripe to be turned into a poster and hung on a student bedroom. I would have loved to take a photograph, but I had only my phone's rubbishy camera and it would have been deeply rude, so of course I didn't. A little further on, a sound caused me to remove my headphones: in a little temple-roofed summerhouse someone was playing gentle rock-jazz guitar, while another silhouette stood watching and offering comment. In a more romantic world, the silhouette would undoubtedly have been the shade of a great musician who passed away in their beloved park, offering instruction to a blind visitor who shared their love.

Just before the entrance, a little shape in the kerb made me halt. Just as my rising excitement had foretold, it proved to be, indeed, a terrapin! A beautiful creature, with fine red stripes along its muzzle, and a battered shell that told of a life lived with enthusiasm. It disdained to move while I was nearby, and threatened to withdraw into its shell, so not wishing to alarm the poor creature unnecessarily, I reluctantly left it. I would much have preferred to curl up with it and sing it the songs of my people, but one must respect the wishes of terrapins.

I did take some photos with my phone, but as yet have not found any way to get them off it. Sorry.

And now it's midnight, and I must get to bed.