A Night on the Town

On Saturday, a friend-of-a-friend kindly invited me out for tea. It's been a pretty lively month, really.

I duly travelled to the Big Screen, where basically everybody meets everybody, and met up with H, as well as new acquaintances Y and T. After the usual pleasantries, we headed out west to a little place H knew. There was a certain amount of complication because T is following the Paleo Diet (the first person I've met to do so). It doesn't seem particularly hard to handle, probably even a bit easier than vegeterianism in Japan, but the language barrier made it a bit tricker, T not being Japanese. We managed.

We ended up going to 豪海丸, which was possibly an izakaya, or possibly just a little restaurant - I'm not that clear on the difference.

Here, the hand-written menu proved a challenge, and the ladies picked food for us. It's the sort of place where you pick shared platters rather than your own meal, so we got about four things to share on a meaty/fishy theme. 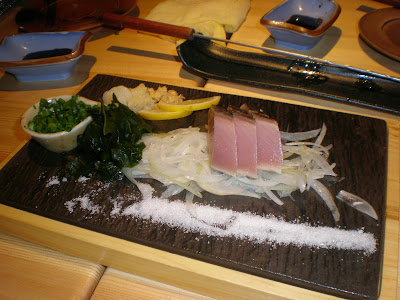 Some extremely tender, succulent fish. You take a slice, rub it in the salt, pick one of the array of condiments to add to it, and then it melts in your mouth. Delish. 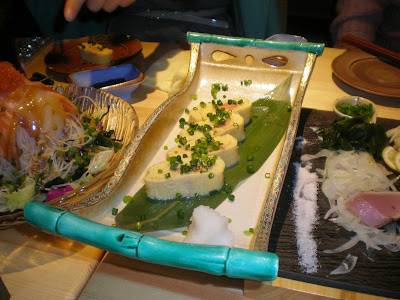 These are sort of omelettey things, with egg and fish roe. They weren't as good as I'd hoped, but pretty decent. 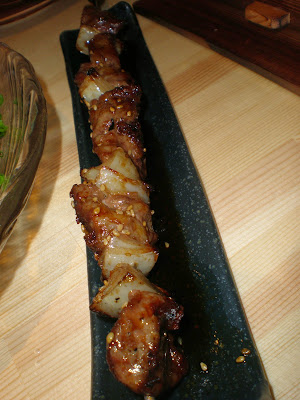 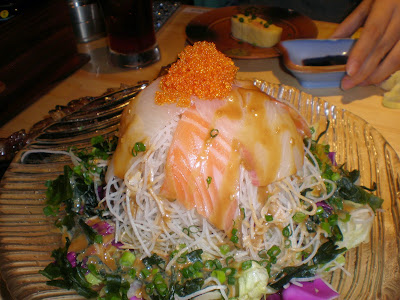 This was just some form of salad - I can't identify the main section, but it's overlaid with salmon and fish roe. I ate it tactically, managing to avoid most of the dressing. Can't abide dressings.

After our meal, we strolled off and sought out somewhere to get a coffee. As it was getting on for 10pm, places were shutting, but we found that Pronto was still open and offered lattes. On the downside, it was dark and we could only get a seat in the smoking section. Sigh. It wasn't too bad, actually. The lattes were certainly decent. 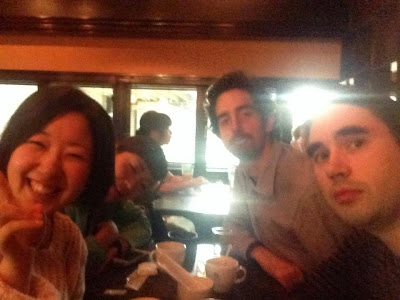 I had a very nice time, both foodwise and getting to know some new friends. I can recommend the restaurant to future visitors, providing you're able to cope with handwritten Japanese. It was a bit crowded, but relatively quiet, not too expensive, and very tasty. Similarly, Pronto seems very acceptable. 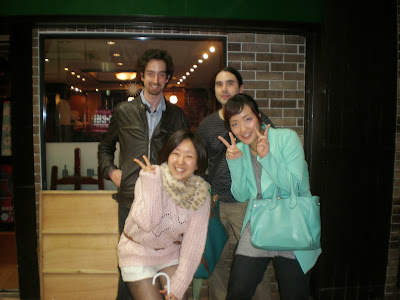