So a couple of weeks ago, C (of Mongolian restaurant fame) buttonholed me in the lounge and asked if I wanted to eat horse.

I've got to be honest, it's really never been on my 'to-do' list. Write bestselling novel, sure. Eat horse, not really. But it was an invitation, so why not.

We met up with a couple of the same people, but mostly new faces, and headed to 馬庵このみ (Umaiokonomi, something like "Horse Flavour Haven" as far as I can tell).

To my dismay, this place was once again designed for kneeling on the floor. However, it was a fair bit more spacious and the tables higher, and between these I was able to manage okay by shifting between postures pretty regularly.

The food we had was basically all horse-based. First, they brought in a plate of horse sashimi, which is to say, raw horsemeat sliced thinly. 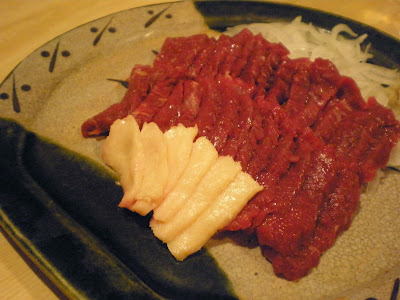 It was okay. There wasn't a very strong flavour to it, so mostly it tasted of the ginger and onions you wrapped in it. By itself it didn't seem to taste of very much, and was fairly chewy.

Next, they introduced a dish of little rings. These proved to be slices of aorta. Yes, I can see the delight on everyone's faces as you read this, but in my country we do eat little skin-wrapped bundles of offal and sausages made from blood, I'm just saying. 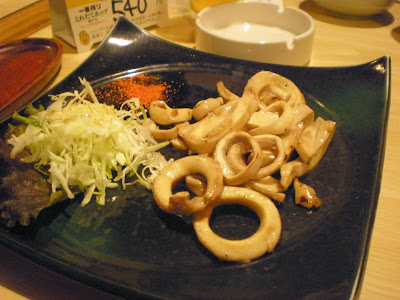 The main word I have for these is "rubbery". The taste was pretty good, in my opinion, but the sheer effort of chewing them was rather offputting. It was considerably more rubbery than squid or octopus, say.

Our third dish was some rib meat, this time cooked fairly well. It tasted fine, not particularly strong - I was quite surprised as for some reason I expected horse to have a very distinctive flavour. It was fairly similar to basic beef, as in beef that hasn't been marinated for flavour. This was basically my favourite dish of the evening: not chewy, a bit of flavour. How very conservative of me. 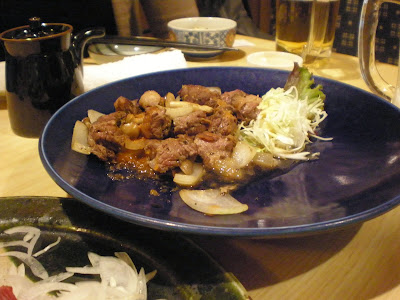 There was also a bit of salad, which refreshed the old palate a bit, although as usual (in all countries) I had to pick out the edible parts least affected by philistines pouring flavoured oil all over it. Why would you do that to a poor, innnocent lettuce?

The meal was rounded off with some sushi - which turned out to, of course, be made from raw horse. I ate some. Because the horse didn't really have a strong flavour, they tasted mostly of seaweed to me. We later realised that the accompaniment was not (bizarrely, we had thought) ham, but delicious sliced ginger! These greatly improved the sushi, making it taste of seaweed with ginger. 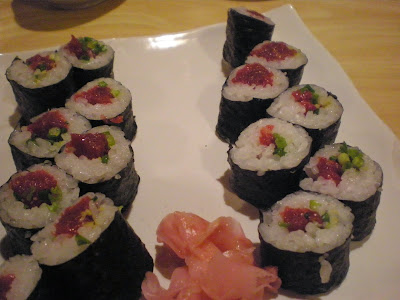 Afterwards, there was a certain amount of back-and-forth on the subject of natto, and one of my companions decided to try it. Essentially the Japanese folks were daring us to eat it. A bowl of natto mixed with raw horsemeat was duly provided (euphemistically termed "cherry natto" because of the colour!) and he cheerfully ate the lot. I had a bite, and it was okay, but not anything I feel a strong desire to try again. It seems bland initially, but has a more complex aftertaste.

I have no photos of the natto, certainly not of me trying it, so you'll just have to trust me.

On the whole, I have to say I wasn't particularly impressed. I had a good time because of the company, but compared to our trip to Ordos, or my visit to the okonomiyaki place, the food didn't really do anything for me. I suspect this is partly because we were essentially just eating meat, and that's not really my thing. I'd have probably preferred a plate of mixed veg and some of the fairly standard cooked horsemeat, either the stuff we had or the various other cuts I saw other diners eating. A shame, some others clearly enjoyed it more than me, but hey, I learned something (I don't really care for raw horsemeat). 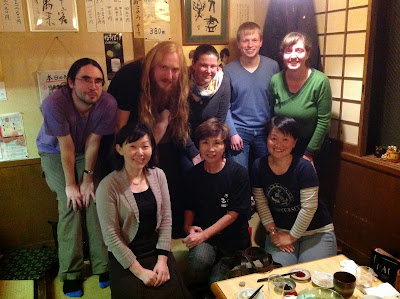 Afterwards, we headed off to a cafe. They'd run a bit short on supplies, so a few small puddings were bought between us, and a coffee apiece. I stuck to the coffee, having already decided I needed to eat some fruit when I got back to make up for all the meat. M asked us to crowdsource music for her, to help broaden her horizons, so we chipped in and passed MP3 players back and forth. I introduced everyone to the delights of Barrule. I'm hoping at some point the list will be sent round, as there seemed to be lots of cool things on it, but it hasn't happened yet...