So recently one of my favourite humans managed to find the time to pop over to Japan for a week. That would be my old housemate, SC. We'd been talking about it for months, so it was brilliant to see it coming together.

As it worked out, SC basically spend some time with me at the weekends either side, and then shipped up to Kyoto during the week while I was at school. I kind of wish I'd been able to go to, but I really need to maximise my study time while I'm here. This is especially true because I'd missed several days due to illness just before she arrived, and wasn't on good form for a while afterwards. So I'd fallen behind, and honestly I'm still struggling to catch up.

The first night, all we managed was to meet up and eat. After strolling around for a while looking for promising places where I could understand the menu, we picked up some food from a tiny restaurant in Tenjin, and went to this place. It's a financial services building with a cafe outside, but everything was closed by, oh, 8.30pm or whenever we went. So we sat outside in the cool darkness, talking about stuff and eating chicken with curry sauce and rice. It was really nice. The only downside was, as ever, the lack of bins! I ended up taking the remnants awkwardly home on the train, which is a bit of a hassle when it's pots half-full of curry sauce and bones, even when you have a bag for them. Thankfully no leaking occurred.

The next day we met up near Hakata station, and went a-templing. We wandered up to Shoufuku-ji, the first Zen temple in Japan. It was great. It's a large, very calm, very tranquil place (at least, when we visited!) and after wandering around for a while, we sat and talked on the steps of the main hall. There was nobody around for us to inconvenience, after all.

After that, we proceeded up the street and bumped into Touchou-ji,, the oldest Shingon temple in Japan. Here we pondered the very orange tower, and admired the very impressive inner hall, although neither of us is in a position to appreciate the significance of what we saw.

Since we were running short of time, we returned to Hakata station and discovered the array of shops and restaurants in the huge tower above it. Not something I'm used to - our stations are pretty much two-dimensional. We ate at an Okinawan restaurant, which was mildly bittersweet from my perspective, but the food was good. Then we parted ways for the week.

The following weekend SC came straight down to Kumamoto, and we arranged to meet there. Having already been once, I was in a position to act as guide and show us around. The weather was far nicer than the first time I'd been, and having company was also a lovely change for my tourism experiences, so all in all I had a great time. We saw the castle first, and it was very pleasant. 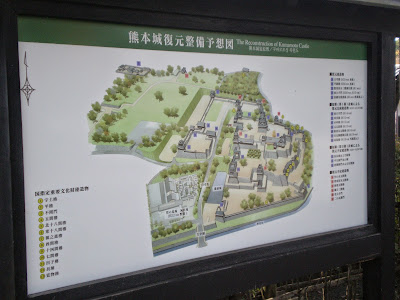 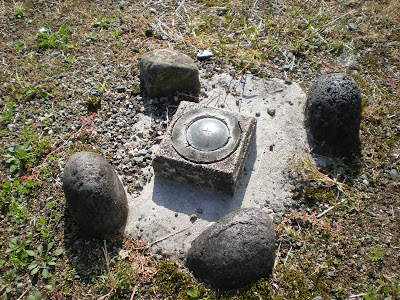 I have no idea what this is for. Possibly some form of sundail, or a crude compass? 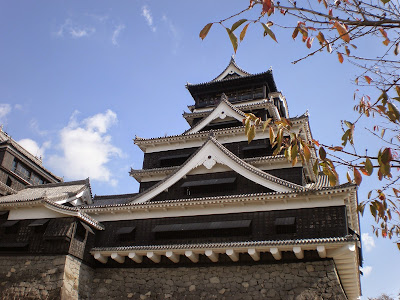 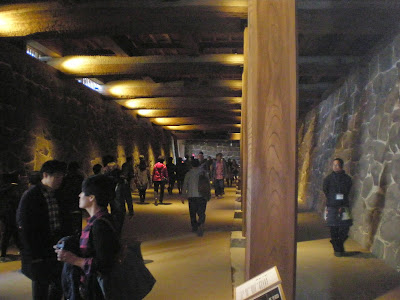 I was delighted to see that the costume performance was happening that day. On my previous visit it had been rained off, but here we were able to get a good spot and watch, although I didn't understand much. The Japanese used seemed a bit old-fashioned (fitting the personas) and mostly seemed to consist of very long sentences that didn't contain much information. But the dancing was fun: 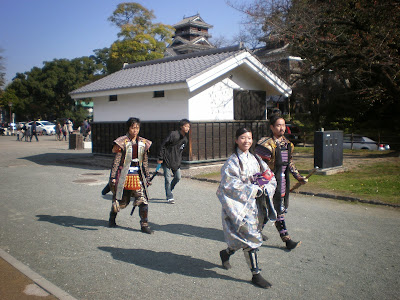 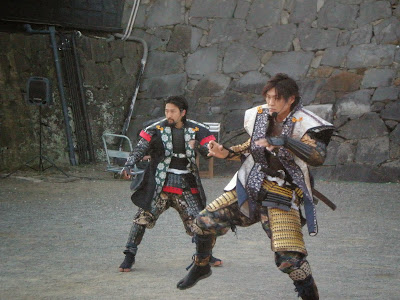 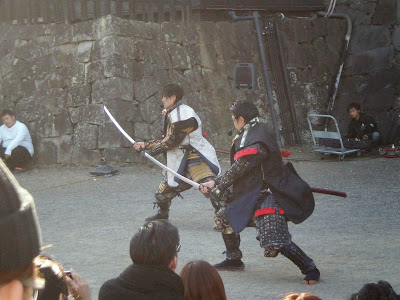 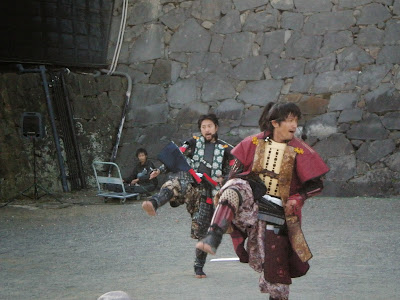 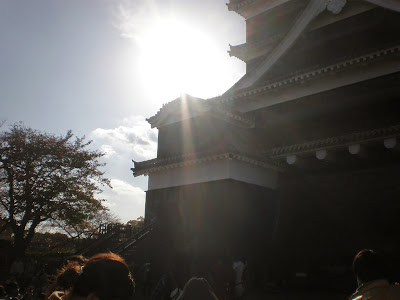 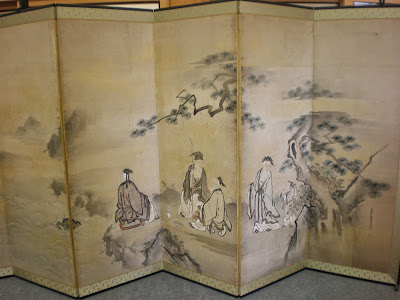 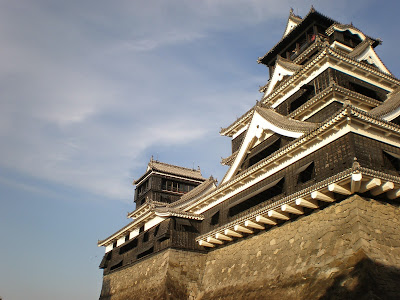 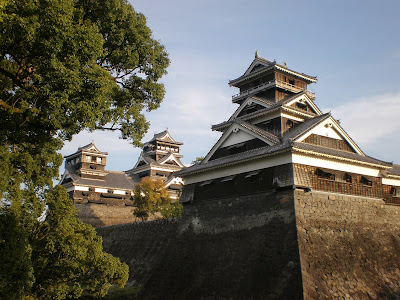 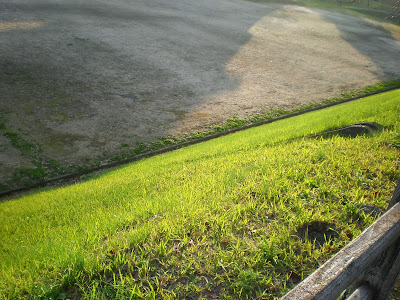 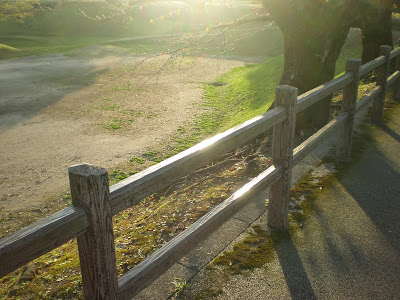 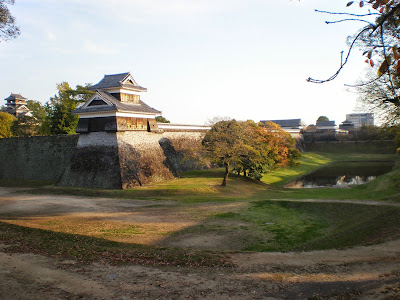 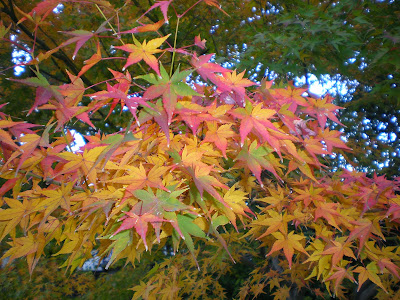 We took a break in the castle to eat some mochi, which SC had been given by a girl she met on route. She seems to have befriended roughly half the population of Kyoto over the course of a week, which doesn't unduly surprise me. 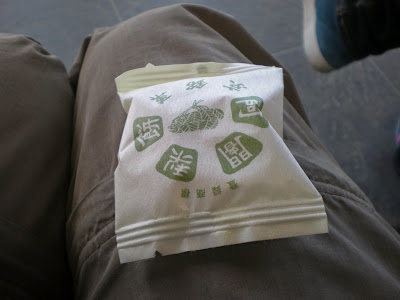 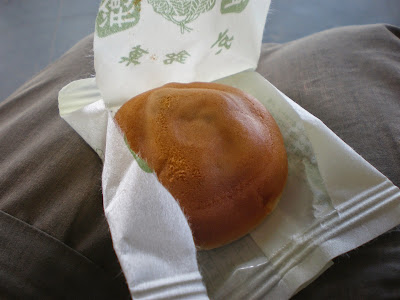 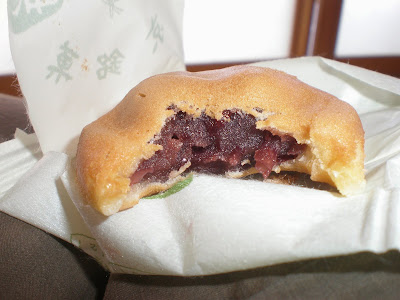 They were delicious, and with that very healthy lunch we pushed on through the Hosokawa place. It doesn't take that long if you're not trying to fill your day, so we were able to cram it in quickly. Although we discovered SC had managed to lose her ticket while walking around the castle, the Hosokawa staff very kindly let her in on the grounds that I had mine (probably guessing it was unlikely we'd randomly met in Kumamoto, and thus we'd presumably both bought castle tickets).

Afterwards we ate ramen in a nice little place, and then went for coffee.

One of the odd little events that holidays get you cropped up when we were getting our coffees. SC spotted a crowd with a van on a corner, and asked me to explain. I worked out that it was one of the many campaigning vans going around recently, this one belonging to Ishihara Yasanari, a candidate for mayor. While I can't quite make out the details of his policies, such crowd-pleasers as "town planning that each individual can be shining symbiosis", "school volunteer grandparents region take advantage of the good technique" and "I want to be able to take the city hall staff test in immediately towards the blind" explain the riotous reception he received. And we can all surely agree that "women are cheerful town, full of full of energy", can we not? As customary, the van was deafeningly loud and probably quite annoying for most of the local shops.

There was also a bit of singing with a rather talented lady; as far as we could tell she just turned up, sang on top of a van and then took her family off home, so I'm not sure whether she was a planned part of the performance, or simply decided it would be a lark and everyone was too polite to stop her...

It hadn't occurred to me that this would be fascinating, but as SC pointed out, an election hustings is a real novelty if they don't really bother with things like democracy or attracting the popular vote in your country. It was one of those teachable moments for me. 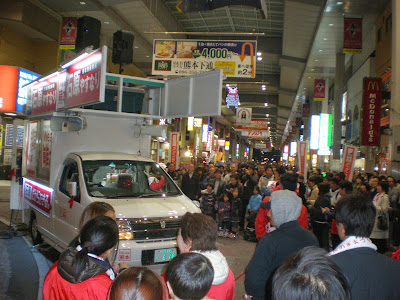 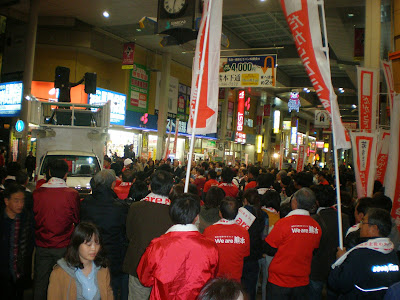 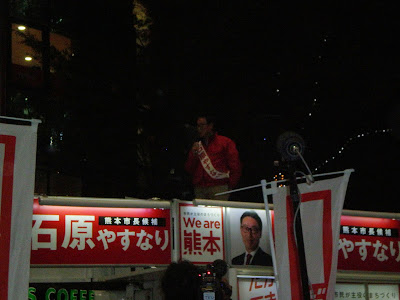 Due to various events going on, Fukuoka was pretty much full to the gills that weekend, and we'd been worrying about where she could stay. However, a friend of mine very kindly stepped in and offered to let SC sleep at her place overnight! Considering they'd never met and I've only known my friend a few months, this was amazing. もう一度ありがとうございました！

We reluctantly took up the offer when nothing else seemed available, short of helping her find a room in a love hotel (probably embarrassing, but a good anecdote for parties!). There was a fair bit of stress with the arrangements, as we were a bit late coming back from Kumamoto, and then had to take locate and take a Japanese bus (for the first time) while texting rapidly in Japanese (also for the first time). In the end we made it, and duly met up, laden with omiyage to thank my friend for this enormous favour. The next morning I called round to pick SC up, and was invited in to meet the family. This was another first, as I've never been in a Japanese home before. It was really lovely, sipping ultra-posh Fortnum and Masons' Orange Pekoe and chatting away. As far as I can tell, I managed not to do anything particularly impolite, which was a relief.

We left after an hour or so, and headed to Ohori Park for a bit of exercise. My friend had explained that there was a traditional Japanese garden there, which I'd always assumed was a temple and so not bothered visiting (I've seen a lot of temples, and I go there for the park). This proved to be another very tranquil place, and we wandered round for ages talking about jobs and politics. Ah, the exciting life of a 30-year-old! Then we picked up something to eat and drink from the cafe, and headed to the airport.

After a certain amount of confusion, SC managed to check in. Meanwhile I was accosted by a lady doing surveys, but we eventually managed to establish that SC, rather than I, should be doing it. A complex trilingual conversation ensued, since the lady turned out to be Chinese. Officially I can speak Chinese, but in this case it was much easier for me to use Japanese most of the time. That added a bit of extra interest to the trip.

And then it was time, and I said my very reluctant goodbyes and headed back home. It was lovely to see an old friend for the first time in months, and I spoke the most English I have since the summer. While I have got to know some very nice people here, and had a lot of fun, it's a different thing from from hanging out with a long-term, comfortable friend and just chewing the fat over ordinary stuff. 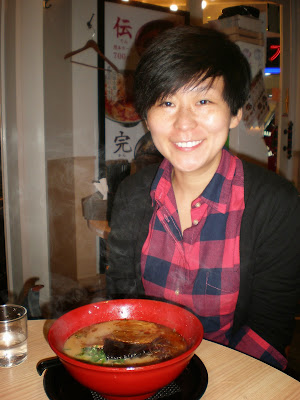