This week another classmate was due to leave, and asked me along to a meal at a Mongolian restaurant. Clearly, not an opportunity to turn down! As we had plenty of time before our booking, we strolled over through the town as food stalls were being set up along the river. This took us back through the area where I'd been for our okonomiyaki experience. 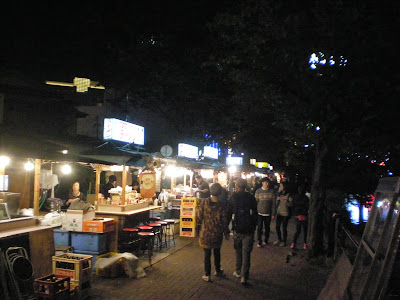 After some difficulty finding the place (it had been a few years since our guide had been there) we found a charming, if tiny, establishment near Hakata. It's apparently increased the table space recently, which made me wonder how it could previously have survived feeding maybe ten people at a time. When we were there, there were around twenty including us.

It has a pretty distinctive feeling, from the menu to the fact that there are Mongolian outfits hanging on the wall for people to wear! I was very fond of this one. 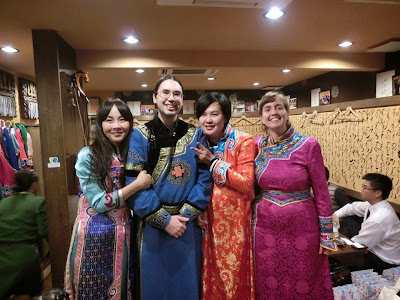 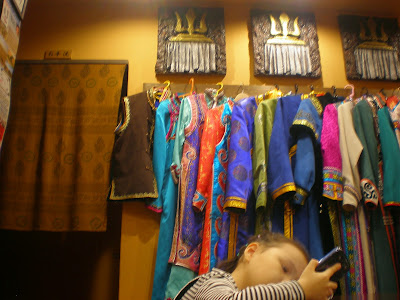 The small girl is also a feature, and essentially runs wild in the restaurant. It seems like a regulars sort of establishment, with an established clientele who get to know the staff and each other. As such, we reckoned she probably views the customers like family friends who come round to eat. I don't think anyone particularly minded, although one of our group was a bit perturbed when the girl decided to curl up like a little cat against her back, taking advantage of her furry jacket to form a pillow! Obviously, some people would find this more disconcerting or troublesome than others; it could be a problem for fragile people as she did have a bit of a wrestle with a couple of us. That being said, I couldn't honestly recommend it for someone delicate, as will be explained later.

Our guide C lives in Mongolia, and had a bit of history with the restaurant owners, so she was able to tell us various things about the menu. Apparently some of it isn't strictly Mongolian but Chinese, although it made little difference to most of us. Helpfully, she could also give us tips for eating some of the items without making a mess!

We began with cups of salted tea. Apparently this is what you do in Mongolia. I sort of expected it to be revolting, but actually it was okay. I wouldn't make a point of drinking it, but equally I wouldn't make any particular effort to avoid it either. Provided you know what to expect, it's fine. It reminded me somewhat of miso soup. 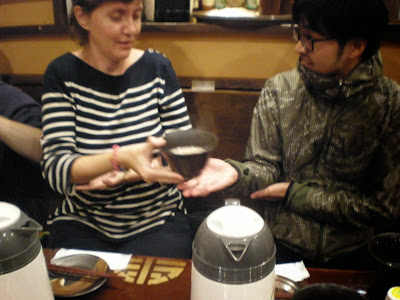 You're supposed to pass bowls in the right hand while supporting the elbow with your left hand, apparently. 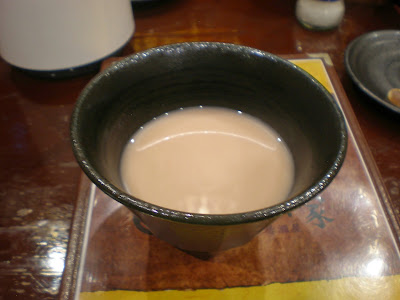 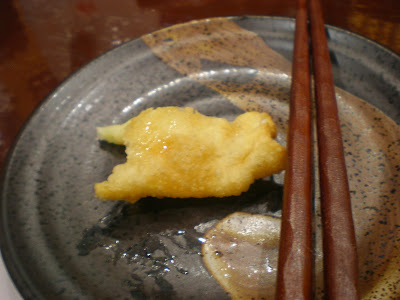 Some kind of cheese pastry - Chinese rather than Mongolian. It was really nice, and in fact we ordered a second round of these. They're very small, so not too filling. 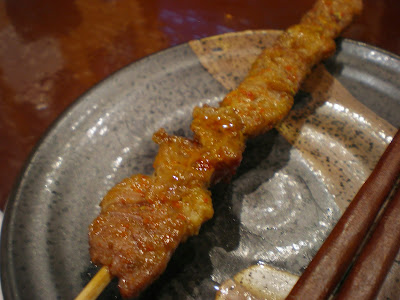 These spicy mutton skewers were delicious. It was really nice to get some mutton again, actually - I eat it a lot in the normal way of things, but it's vanishingly rare in Japan. 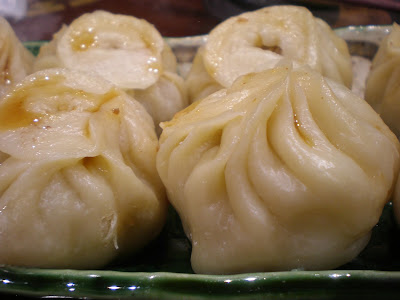 Dumplings, pretty much in the Chinese style, but a little different. The trick to eating these is to bite a tiny hole in the side and suck out the gravy first, otherwise it's liable to spray all over you when you take a bite. Thankfully this was explained to us in advance. Yum. 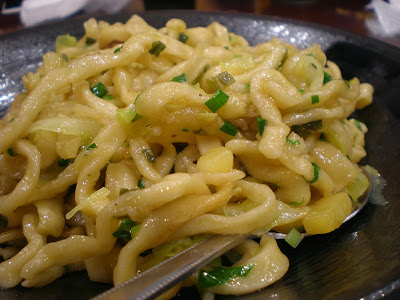 And here's the main course! These are quite udon-like, thick (wheat?) noodles with a few bits of chopped vegetable and shreds of meat. It was delicious.

Another non-authentic feature was that the restaurant was arranged as low tables on matting, with thin cushions to kneel on. This was a fairly serious problem for most of us non-Japanese, since we're really not used to kneeling for any length of time. Certainly not for nearly three hours! The table was lower than a lot of kneeling furniture too, leaving very little room to wriggle in, and not enough to sit cross-legged if your knees jut up as far as mine do. Plus, despite being only average height for the UK, I'm pretty darned tall by Japanese standards. I had to do quite a lot of shifting between unsatisfactory ways of sitting to keep my legs alive, and it was really quite uncomfortable. As such, I couldn't recommend this to anyone who isn't fairly fit and able to wriggle about or put up with this kind of discomfort.

Thankfully, the good atmosphere, interesting food and new acquaintances mostly took my mind off it. Other than my sponsor N-neesan, I only slightly knew a couple of the others, so I had lots of getting-to-know to do. They were all very nice, friendly people and I had a good time chatting to them. I'm glad, because it must be said that the food came slowly, as it was being freshly made. This wasn't really a problem as it came one dish at a time, shared by everyone, rather than as individual meals per diner. It did, as I said, mean we were there for nearly three hours getting our meal. This is an evening's entertainment, not a place to go when you need food.

Towards the end, I was suddenly struck by the whiff of smoke, and shocked. It's odd in hindsight, but it's been nearly ten years since the indoor smoking ban left British caffs and restaurants blessedly free of tobacco fug, and I was really taken aback by the idea of someone smoking in an eatery. This was one of the reasons we finally left; I have to say I wasn't displeased, since I'd been a bit frustrated by the slow pace of the evening (not least because of my poor legs) and was starting to wonder what time I'd get home.

At this point, I was expecting to head home, but the party started splitting in two instead: the other two men were heading somewhere that involved sniggering and probably alcohol, while the people I knew and who lived in roughly the same direction suggested going to a café. What to do? The choice of roaming the dark streets by myself in search of an entrance to the underground, or going for a cuppa with six very charming ladies, was a difficult one, but in the end I agreed to tag along. 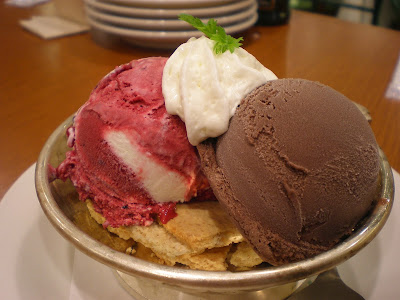 Here, rather than getting a drink, I stuck to water and this very exciting ice cream. One scoop is self-evidently chocolate; the other was something delicious and fruity, but I'm not sure what.

C experimented with a healthy açaí juice - this is a berry I'd never heard of before reaching Japan, but I've seen it quite a few times here. It seems to be a recent food fad. We agreed that it's basically weird, neither nice nor actively nasty. Not one I can recommend!

After another hour or so of eating and chatting with all these lovely folks and discussing linguistic nuances (truly, the life of an international student is an onerous one) we finally broke up the party, and headed home. I got back around midnight - and promptly realised I had about an hour of homework to do before bed. Alas.

To anyone else, I would heartily recommend a trip to Ordos. Those who drank the beer rated it highly; I stuck to my salted milk. Everything was delicious and the prices were reasonable. The downsides are, to recap: you have to kneel or sprawl while eating; significant risk of smoking; and it's not likely to be a quick meal. Come prepared, and you should be fine.