So another milestone passed today as I moved out of my place in Oxford, dumping a vast pile of stuff onto my long-suffering parents. This move bore uncanny similarities to my work on the university's REF submission last year.

I'm horrified by the sheer amount of stuff I've managed to accumulate here. It's partly due to having hobbies that call for stuff (games), and substantially due to my reading habits. A lot of what I read is hard to come by in libraries, and so I tend to buy it or get it for birthdays, and then am reluctant to get rid of what was hard to acquire. I also have a lot of household stuff on account of living in two unfurnished flats. It's inconvenient to not have suitable kitchen stuff, for example, and while individual bits aren't that expensive, re-equipping a whole kitchen is not a cheap prospect.

This stage isn't quite over, as I have lots of unwelcome arranging-of-stuff to get done over the weekend. Just hoping for a good night's sleep to set me up for it.

Yesterday I had my final lesson with the amazing Naoko-sensei, which was a little melancholy. Seeing as it inspired me to move continent for six months, you can probably guess how much I've enjoyed our lessons this past year. 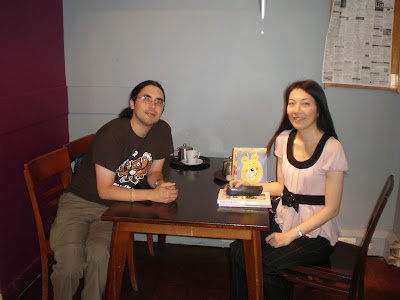