So, Saturday. Today I fly to Japan, via Amsterdam and Seoul.

The sleep-adjusting thing doesn't seem to have worked. I was more or less back on track for being 4 hours ahead. Unfortunately, on Friday night I carefully wound down, had a shower, turned off screens, avoided bright light all evening, went to bed... and was as completely and utterly unable to sleep as I've ever been.

I've had long-term insomnia before, so it's possible that I'm just not able to cope with fluctuations in my sleep schedule. The fact that I tend to go to bed late probably doesn't help; if I normally went to bed early it would at least give me a headstart on Japan.

As it is, sticking to my normal about-midnight bedtime would leave me wanting to sleep in Japan just when I should be getting to school. Not ideal. 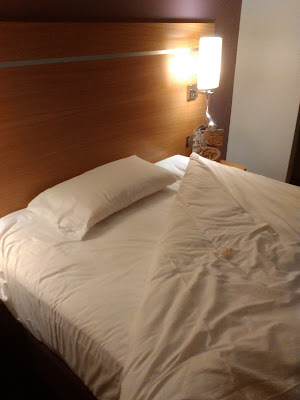 My bed. I'm sleeping in a bed. This is so weird you guys. 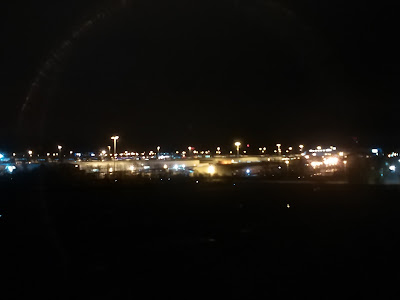 The view from my window, over the airport by night

So I tossed and turned for several hours, occasionally getting up for a drink of water, reading a bit, doing some stretches or whatever. I think I eventually drifted to sleep around midnight, despite being up since 4am - and I woke up regularly.

Unsurprisingly, I feel pretty lousy, knackered and queasy. I could barely swallow a couple of spoonfuls of cereal and half a yoghurt from the lavish continental breakfast I'd paid for. Tragic!

I walked around the hotel a few times to get some fresh air and try to sort my head out. It helped a bit. Three and a half hours later, I'm in Manchester Airport and have just eaten a small bacon buttie. It was surprisingly hard work to get here; the Manchester Airport Premier Inn may be geographically close to the airport, but actually getting there requires a substantial bus journey or a 45-minute walk along a main road. I chose the former.

It would have been very useful to have that information in advance, since on arrival at the Manchester Airport station I spent quite some time wandering around in confusion wondering how to get there. The hotel itself doesn't bother; they explain how to get there by car, but any fools who dare to use public transport are unworthy of their attention, apparently. The station has a sign for the one hotel that's actually in the airport, but despite a lengthy search, I couldn't find any information indicating where local hotels were - even though you'd think quite a few people might be going there. I was very glad to have upgraded to a smartphone, since I was able to burn data (hey, I'll be out of the country until my next billing cycle) to look the place up on Google Maps. Of course, I needed to ask Google for my public transport options and timetable too. And it's a good thing Google could tell me the name of the stop and how far it was, since the cursory timetables available in the airport bus station didn't bother with mentioning trivial details like "this stop is the closest one to a cluster of major hotel chains".

In fact, let me just harp on that for a minute. Not only does neither the airport nor the station offer any guidance for puzzled travellers seeking to track down their hotel late at night, but the bus company can't even be bothered to put a bus stop there! I kid you not. Despite there being both a Premier Inn and a Holiday Inn hosting several hundred rooms apiece, and a Marriott just around the corner, and these being the main cheap hotels for the airport, the method of travel is as follows:

But I'm here now. Maybe my body clock will be so confused it'll be glad to settle on Japan time? We can but hope.