So I've been wanting to eat okonomiyaki again for about eighteen months, in fact, and KM-san kindly offered to go with me.

My schedule this year is much more consistent; I start at 9.30am and have classes until either 3pm or 4pm, with an hour for lunch and brief breaks between classes. There's more hours because this year (not being a long-term student) I'm on the conversation course track, not the generic track.

We met fairly early, so we had time for a coffee and a walk before we went for food. I needed them too, as I'd inadvertantly eaten too much lunch and was very full!

I'm staying in Hakata, so we wandered north a bit in search of Higashi Park (東公園). 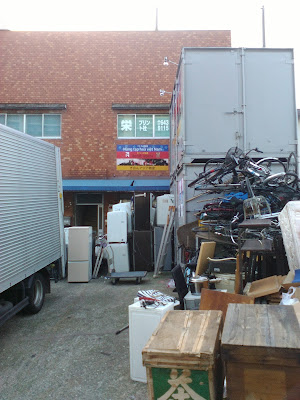 You can't easily see it from here - you can hardly see it at all! - but there's actually a shop here that isn't part of the second-hand shop. 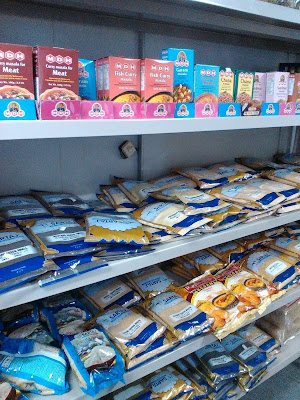 Inside it sells all kinds of ingredients, many of them quite hard to get hold of otherwise. I made a particular note as an Anglo-Indian guy at the school had been yearning for some good home cooking. This isn't pre-packaged "Genuine Authentic Whatever", it's just raw ingredients for the most part; bags of chickpeas and suchlike. 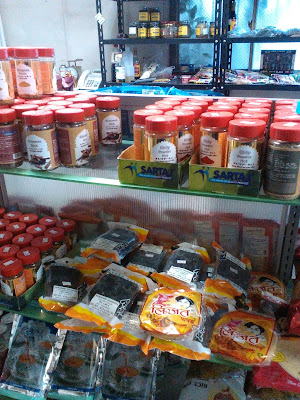 We did eventually reach the park; it's a pleasant, peaceful place. Unfortunately the route there involves a lot of walking near busy roads with (of course) no pavement, so it's a bit stressful actually getting there! 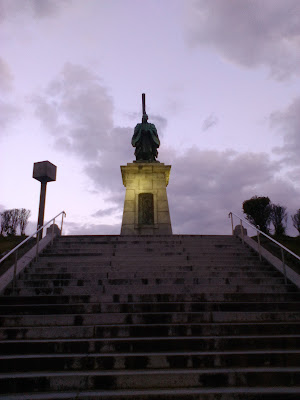 A statue of Emperor Kameyama

We also found a handy cheapish supermarket, 100 Yen outlet, a Book-Off store (second hand goods) and various other useful places in a little retail park within about 15 minutes of my house. Always useful!

And now, the main event

So for our meal, we headed back to Hakata station - or specifically, the bus terminal. At this point we had to stop for a brief cultural conversation.

See, I can't speak for any other countries, but when I think "extremely popular and highly-rated restaurant", the words "bus terminal" do not hasten towards my lips.

In the UK, bus terminals don't generally feature food at all - frankly you're lucky to find a vending machine. Typically, if there is even a single shop, it's a newsagent (selling papers, magazines, sweets, drinks, and possibly two sandwiches that have been there untouched for several weeks). Where they do happen to coincide with some kind of food outlet, it's definitely on the cheap end of the scale. We're not even talking McDonalds here, it's more like Big Dave's Fried Lard or Chick&Licious. Maybe some kind of cookie stand. There is absolutely no association between buses and cuisine, and the words "would you like to go out to the bus station tonight?" are either an indication that both of you are unemployed but you know a guy who can pass you some free chips on the sly - or an indelicate suggestion paired with an admission that you live in your mother's basement.

Railway stations do a little better. They often have food. It's usually sandwiches and muffins, or (in a few cases) bacon butties and fried eggs, but I've seen a couple that had actual pubs which could serve pub food. Again, I don't think the idea of taking someone to the station specifically to eat would ever have occurred to me. On reflection, I believe London Somethingorother has some relatively posh-looking restaurants, from my last visit.

Apparently things are rather different in Japan. I mean, it makes sense. A major railway station (to which the bus station is directly adjacent) is a destination for lots of people and also easy to access. People can readily walk, get the subway, or take a bus there. It's an ideal place for eight storeys of high-class shopping and restaurants. It's just that things just don't work that way in Britain. In much the same way, there's no actual reason there couldn't be a Michelin-starred restaurant in a branch of Aldi or B&Q, but there never is.

So yeah, Hakata City it was. We went to a place called Fukiya. I don't have any photos of the inside (we were talking, and it was pretty crowded with people eating, so it didn't feel polite) but it was lively and pretty noisy, though not in a bad way. The okonomiyaki was delicious. Apparently it's got a distinctive Fukuoka taste, rather than the two main Okinawan and Osakan varieties - I can't really tell to be honest... 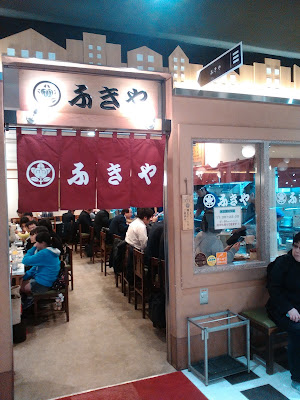 Fukiya is well worth a visit, and very reasonably priced. As it, cheaper than any kind of meal out would be at home, let alone a popular restaurant.

Sadly I was still a bit too full to finish mine, but I decided discretion was the better part of valour and refrained from stuffing myself to the point of nausea. All in all, a nice evening.