Having had a pretty nice time in Lucerne, the time has come to begin what inevitably feels like the rather depressing homeward phase of the journey. I'm due to fly out from Basel, but having come all this way I decided to book a couple of days there first. Now this feels like a mistake.

Easily buying a ticket, I hop onto the train and read for an hour, looking up as we pass through the nicer bits of scenery. 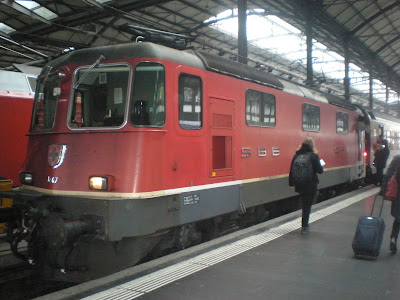 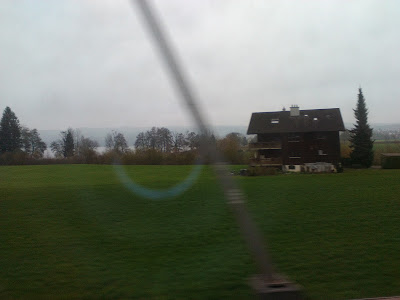 Getting off at Basel station, I am greeted by a grey building and a man lighting a cigarette. I drag my luggage onto the escalator into the main concourse, where my initial plan is to look for somewhere to eat. It's early, but getting to the hotel will take a while; if I can eat first and then go to dump all my stuff, that'll be great.

Using the handy free wifi available at all the stations I've visited so far (take note, Britain) I hover outside a bookshop and scan for eating places, trying to ignore the smoke wafting towards me from the smoker by the door. There's a few options but not a huge number nearby. I check out the offerings at the cafe across the way, trying not to breathe too much.

Failing to find anything appealing, I head downwards again, intending to go through the station and check out a little run of eatery-type streets near the station and tram station. Dodging smokers as best I can, I decide the CHF40-a-head place in the basement isn't for me and head north. This rapidly turns out to be west.

The lesson for today is that even Google Maps is not your friend.

With much difficulty I manage to loop back in the intended direction, passing a Burger King and a rather intimidating Italian restaurant. Nimbly evading the constant barrage of trams, I attempt to go to a Chinese place just by the station, but looking inside it's fairly clear that my suitcase would be a distinctly unwelcome consumer of space amidst the very packed seats. I give up, deciding to head to the B&B and drop off my things, then come back and eat late. 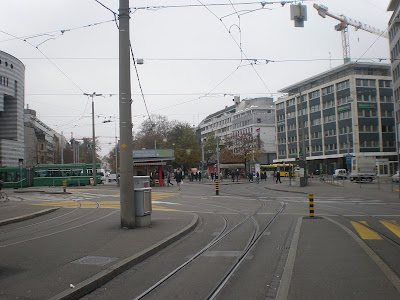 If I was summarising Basel in one photo it would probably be this one. There are at least six tram stops in this photo, ideal for first-time visitors who have no freaking idea what they're doing.

It was harder to find somewhere to stay in Basel, so I've been forced to book somewhere in the actual suburbs. This means a two-part trip, by tram and then bus, according to what I can find out. I buy my ticket and wait for the tram, then start watching my progess. Google Maps is behaving very oddly.

No, I'm just going in a completely different direction to what I expected. This must be the wrong direction of tram.

I get off, now nowhere near where I wanted to be. Exasperated, I decide to set off on foot. It's about a 30-minute walk from where, as best I can tell, I am now. Since the transport options are now different, I'm not sure how to get there by any other method. Also, getting buses in another city is in my experience a very different proposition from getting trams. Trams have fixed stops and it's fairly clear when you're there. Buses do whatever they like.

There now begins a Kafkaesque carnival of errors.

Diligently reading the names of streets and consulting my map, and Google Maps, I nevertheless progress perpetually further from my intended route in an escalating spiral of fractal wrongness. Every street appears to twist and turn in directions that do not, on calm consideration, reflect the familiar geography of our material universe. Setting out north-east along Sternengasse, I find myself on the wrong side of an underpass to the west ascending Auberg. Elizabethenkirche appears to exert an unholy influence over my fevered movements as I search with increasing grim frustration for a way out of the knotted streets. The stars above wheel in their courses, and hateful shadows dance in the doorways at the corners of my vision.

At last, I miraculously break free into Aeschenplatz and, pausing only to solve the intricate puzzle of where the Number 3 Tram might stop amidst a bird's nest of tramlines, find myself at last on the way to Aaron's Sleep-Well B&B.

I get off at Breite and set off in what turns out to be the wrong direction.

I have never been more thankful that I set up an overseas data roaming plan before coming here.

Weaving my way across several crossings and under a flyover, I set off into a suburb of apartment blocks, pausing only to photograph a crop of unfamiliar brain-like fruit fallen beneath a trea. At least, I hope they were fruit. 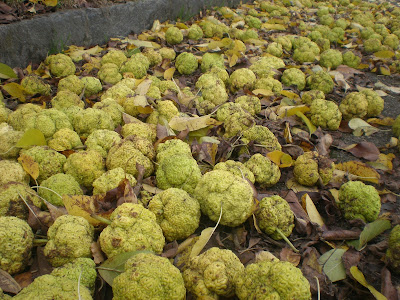 Based on my experiences so far today, it is entirely plausible that these are not fruit. I avoid examining them too closely.

Following Google Maps with the fervid focus of a dangerous madman, I haul my revolting yellow suitcase over curbs and around cars as I make my way into the maze. At last, I spy the actual corner of Aaron's Sleep-Well B&B distinctly visible before me, amidst the trees. It's just past the bushes, the vans, and that impenetrable wall of hazard fencing erected by the hard-hatted man diligently demolishing the entire road-and-pavement network of the district.

Not to be so easily defeated, I consider sitting down on my suitcase and hoping to be adopted by a passing benefactor, but glimpsing someone striding past on the other side of the hostel I have another idea. Although Google Maps doesn't actually show it (because it's not a road - seriously, it's a major flaw of a product people use for many things other than driving, although possibly not in car-obsessed America) there is in fact a footpath up ahead, beside the canal.

I round a couple of corners, pass an apartment block, and drag my suitcase up a very narrow grass-overgrown flight of stairs to the canal, resolutely not swearing.

I hate Basel. I don't hate it in any particularly fervent way; not the kind of passionate hate that somehow endears you to a place. It's the kind of dull, grey hatred I attach to taxation paperwork and Crewe Station; I am grimly determined to endure it. I resent the time I have spent pointlessly walking around it, the inescapable smokers, the fact that my hotel is annoyingly far away, the absence of convenient eating-places and the necessity of spending two days here before I can leave. A scrupulously fair judge might consider some of these resentments misplaced, but I have abandoned any pretence at impartiality.

Soon, a mere hour and a half after I set off on my twenty-minute journey, I stand outside the hostel.

I wander through the gate and knock politely. No answer. It's smaller than I expected...

I try the door. Nothing. There is a tourism sticker on the door though, so I'm confident it's the right place. It has a kind of... sitting room look.

Giving up, I wander back to the canal. There's a set of steps leading down the side of the building, to the pavement I'd have used if it wasn't being dug up. With no better ideas, I decide to go there and reluctantly drag my suitcase all the way down. Here I do find a postbox with labelling that confirms it's the right building, but no sign of anyone here either. It doesn't look much like a B&B. 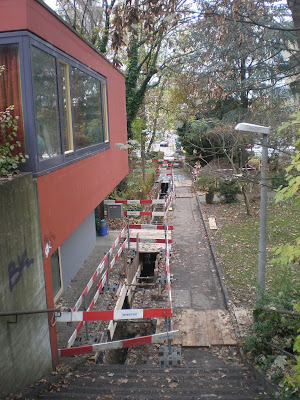 Part of the obstacle course from the main road. It looks even worse from the other end, but I think technically you probably can get through in fact. Especially if you don't have a suitcase. 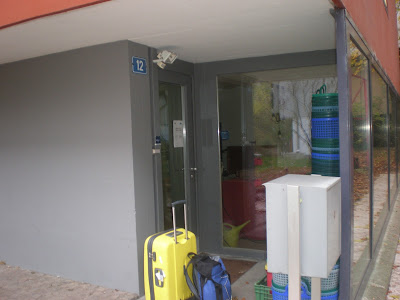 The entrance, although not the right entrance, to the B&B rooms. You need to go round the back, to the third entrance you can't see from any external point. Obviously.

Checking my emails, I notice that the staff agreed to expect me about 2pm. It's only 1.30 now. Maybe they're out? I dash off a quick email (thanks again, data plan!) and sit down to wait. Luckily, a few moments later, a man walks around the corner of the building carrying a pillow. He looks surprised.

Things are shortly sorted out. This is indeed the man in charge, and he's been cleaning the room. I go inside. As far as I can tell, it's not what I'd consider a B&B at all - which is to say, a house or pub which lets out some of its rooms for short-term guests who also get breakfast. Instead, it's a small building divided into a large and a small apartment, which are as far as I can tell let out by offsite owners. Unless they do actually live upstairs? You can get breakfast, although I don't understand how that would work, and I decide not to.

Finally having freed myself of the suitcase, I walk back down the canal towards a tram stop. I don't emerge at the tram stop I expected, but making the most of a small victory over geography I get on the damn tram and like it. A small bonus I discovered is that a stamped card I got from the B&B allows me free travel on public transport, though it's a shame I couldn't get it before I got the tram there - always a problem with these schemes.

Disembarking in the middle of town, I look for somewhere to eat. Passing a posh restaurant and a bijou burger shop, I find a Burger King, and decide to give up any pretence at sophisticated tourism or indeed balanced nutrition. Chips it is then.