Zurich: Beneath a Steely Sky

What with one thing and another, at the start of October I was finally able to book holiday again. I had quite a glut too - in a fit of enthusiasm-slash-pessimism, I took the option to buy some extra days.

And then I hit my never-ending problem: what to actually do with them.

Musing on my holiday allotment, I worked out that a) it had been seven months since I last had a non-trivial break from work, and b) I should really get started making inroads into these holiday. There's a large chunk of the year when I can't easily take any (or it's too expensive), I didn't really want to lump much holiday in with Christmas, and I was hoping to do something in spring which I need a certain amount of leeway around. So, time to book something.

It's been absolutely ages since I went to Europe, as it turns out. In fact, I think I last visited in 2007? Since then I have been to North America, Madagascar (for family reasons), China and Japan (twice) but only set foot in Europe as a stopover for the Madagascar flight. And my German could certainly use the practice...

There's really only a couple of sensible options for me if I'm visiting Europe. I don't like going to places where I can't speak the language, and the only European language I speak adequately is German, so it's the Germanic belt. And I have friends in Switzerland and Germany. Since I've never been, though, I thought I should finally get round to paying Switzerland a visit.

And so, much too early on a November morning, I left a hotel at Manchester airport and headed to the plane.

Things got particularly inconvenient because, shortly after I booked this holiday, I developed some health problems. Although I seem to be improving gradually, it's still not entirely clear what they are. Regardless, I've been off work for the past week and fairly exhausted - but the doctor advised me not to cancel, so here we are.

As a consequence, I suspect my reports of Switzerland will perhaps lack some of my usual cheery sparkle (ahem) - for which I apologise.

I hopped onto the train, enjoying the classical landscape of snowy hillsides as we rushed along. 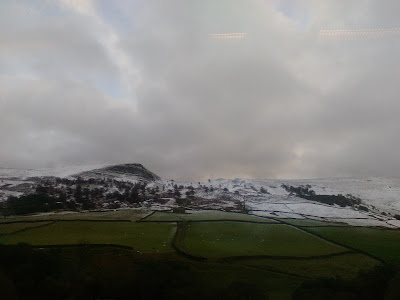 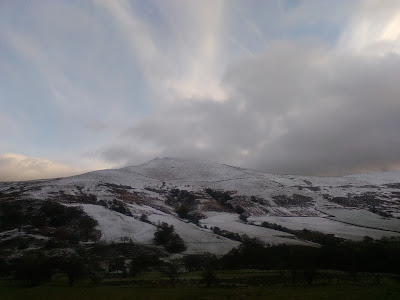 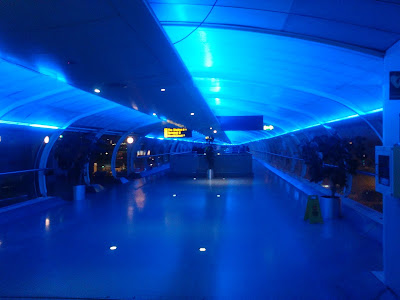 The cyberpunk tunnel between the terminals of Manchester Airport. Rather an eerie place to walk around at night. 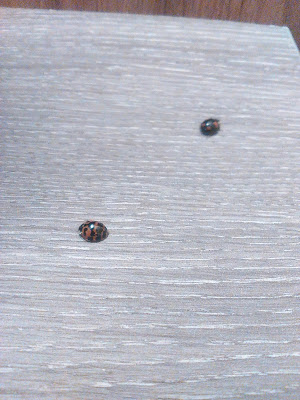 Ladybirds! Two of the three or four blighters I detected... after going to bed, I felt an odd tickling sensation and discovered several ladybirds had been nesting in my pyjamas! There've been a fair few in my flat recently so they presumably snuck in there. Rather disconcerting.

At about 11.30am local time, I arrived in Zurich airport, where it was raining. Slipping relatively quickly through immigration, I made my way to the station and, after a little confusion about platforms, boarded the double-decker train, noting how expensive the ticket seemed to be.

This will become something of a running theme. 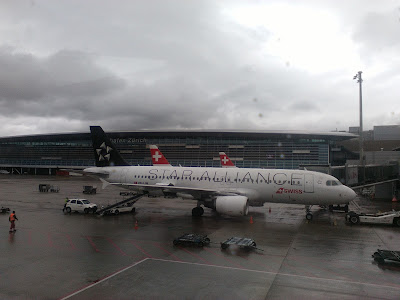 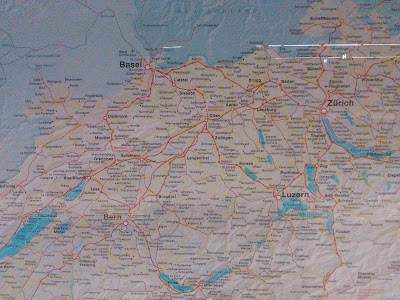 I'm doing a small tour, but still only covering a tiny chunk of Switzerland - a triangle between Zurich, Lucerne and Basel. 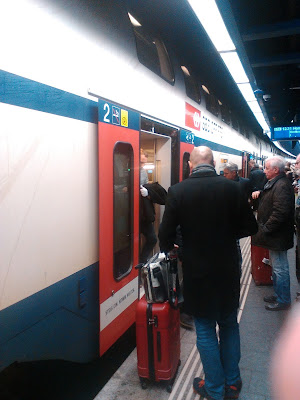 At the station, I found a thriving shopping centre, and decided to take the opportunity to eat. I knew my hotel didn't serve meals, and wasn't sure that there was anything very convenient nearby. At least there were quite a few eateries by the station. I picked a friendly Asian food place and attempted to order.

At this point, some kind of problem arose. I confess I am not sure exactly what it was. I think the situation was that whatever I ordered would have to be cooked from scratch, and the lady was pointing out that they had various other things available immediately. Rather than get into a long discussion in my bad High German and her slightly uncomfortable Swiss German, I conceded the point and ate something vaguely similar and very spicy. Delicious, although I'm not sure if very spicy food is ideal when I'm ill. Perhaps that chilli last night was also a mistake... 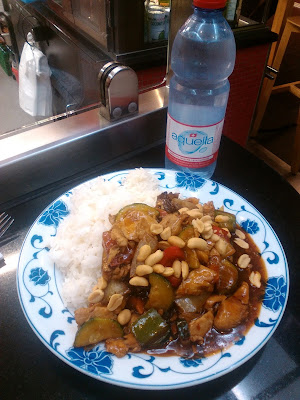 Fed, I started making my way to the hotel. Strolling along the busy leaf-splattered streets as the rain beat down, I tried to gaze around and drink in the exotic Swiss scenery, but the rain kept getting in my eyes. Apart from the very Swiss-looking occasional passing tram, and the architectural style of some buildings, I could have fooled myself that I'd never left Manchester. 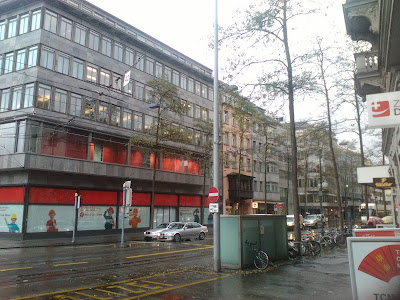 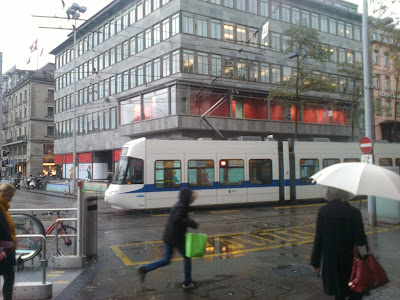 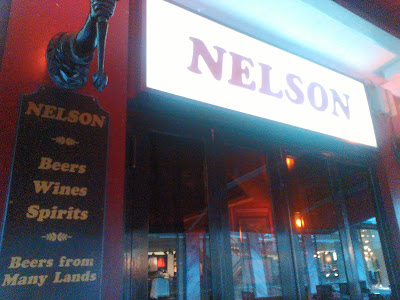 This was a rather unexpected development. 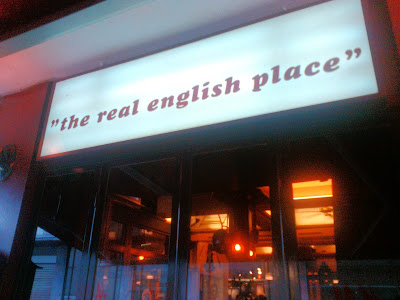 That's right - a Traditional English Pub! Haven't seen one of those in a while... perhaps because I live there? 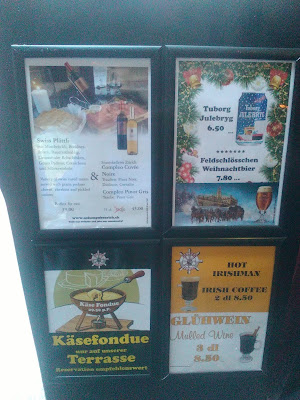 It is super English you guys, get a load of this quintessential Englishness. Wonder how many takers the Hot Irishman gets..?

I finally deposited my stuff at the Hotel St. George, and paused for a break. 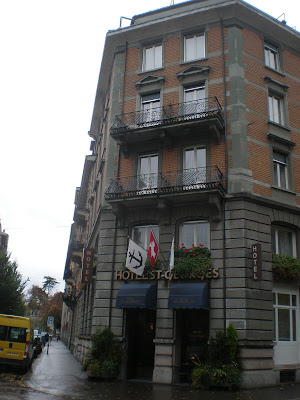 I was a bit confused to see that all my bedding seemed to be uncovered - bare quilt, pillow etc. I wondered briefly whether it was like my apartment in Japan, where most of it was stored in cupboards for guests to put on themselves? Then I briefly started wondering whether it was some quirk of Swiss hotels that I didn't know about, and I was expected to bring my own... thankfully, around this point a cleaner knocked to ask if I wanted the room finished. They'd obviously got as far as stripping all the beds, but not redoing them! D'oh.

As two cleaners bustled into my room to sort things out, I decided this was the time to light out and go for a walk. Besides, I wanted to do that anyway. I grabbed my phone and shoulder bag, and marched out into what was now just drizzle.

My idea at this point was just to scope out the city in general. I'd never been here before, and it was already early afternoon, so I wouldn't have much light left. I was hoping tomorrow would be nicer for touristing, and planning to do a circuit of the big landmarks, which are all pretty close together. So I just headed out on a general ramble around town. 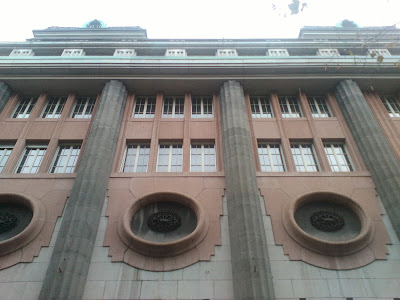 This building is cool, but I couldn't work out what it actually is. 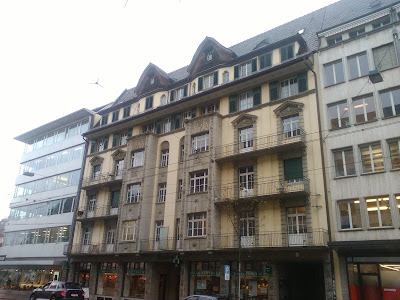 They're a bit hard to make out, but this style of balconied flats seem to be fairly archetypal. 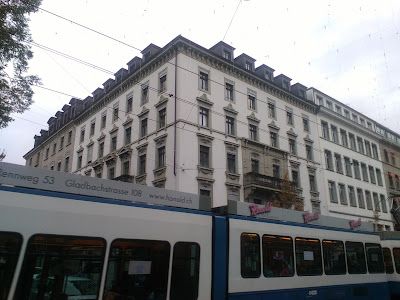 It was sort of interesting, in the way rambling around unseen bits of towns can be. I've got to admit that the on-and-off rain, the gloom and the fairly heavy traffic didn't really help show the place at its best. There's quite a lot of nice buildings around, with some pleasing sets of apartments in particular. The river is probably also quite nice at times, but today it was a roaring grey slug decked with sullen mouldering trees, while cars thundered in the spray of the adjacent roads. 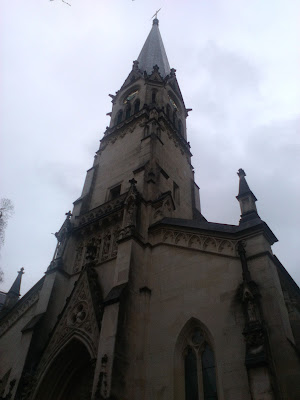 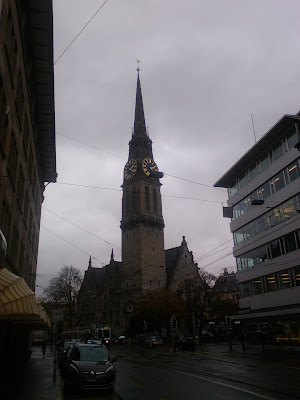 It looks better in real life. 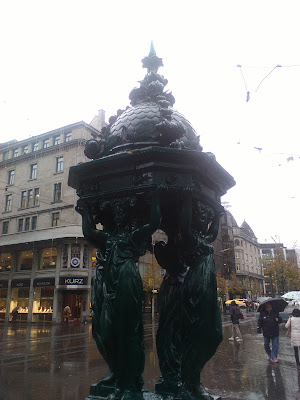 This fountain symbolises international cooperation in the quest to provide everyone with clean, safe water. No, honestly it does. There's a plaque in four languages and everything. 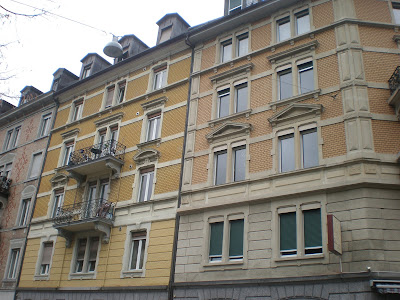 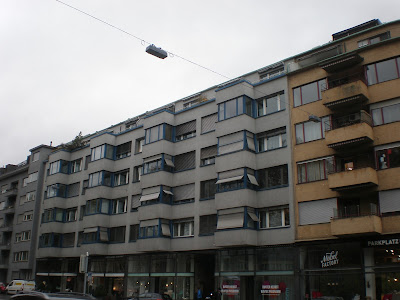 That isn't actually a distant cable car overhead, but it kind of looks like it... not sure what it is, mind! Something tram-related? 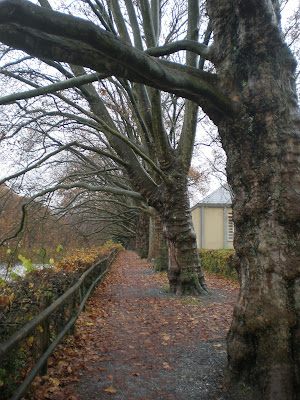 Rows of glistening trees along the riverbank 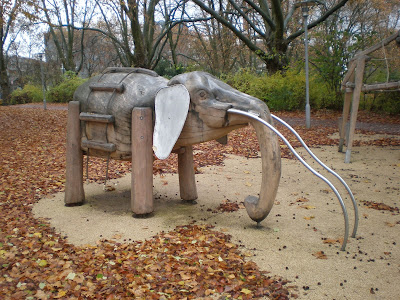 This play area has an elephant-shaped play apparatus. 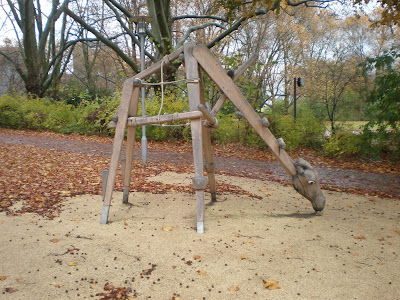 And a giraffe. What luxury! 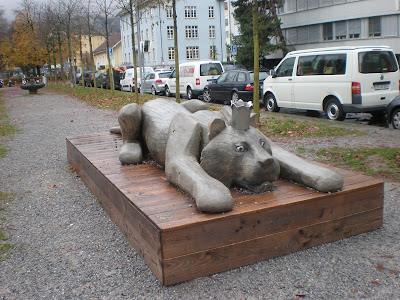 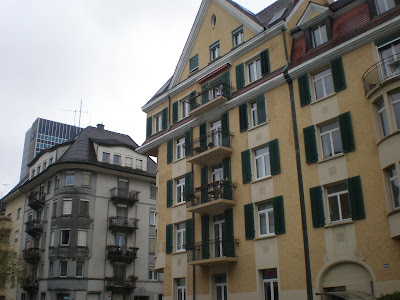 M-san (who you may remember) had sent me a list of suggestions, so I decided to scope out some of those. I did manage to find the Asian foods store and had a wander round, but resisted buying sweets yet. I sat down for a cuppa in a Starbucks (yes, yes, but that's what I found) to recover my energy and was rather horrified at the price. 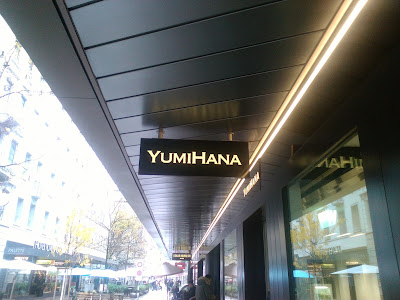 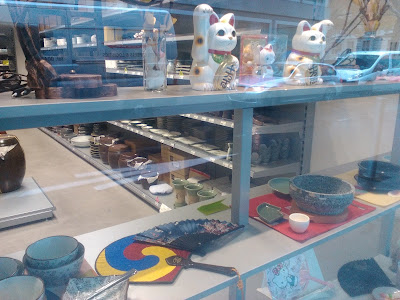 After a bit more strolling, I came back to the station and picked up a few things to eat from the shops there - a tasty croque monsieur, yoghurt and fruit salad. I didn't fancy looking for a restaurant tonight after a hot lunch, and saving money seemed like a good idea considering! So I just ate those in my room.

At this point I discovered a couple of other things.

Thing one: man, this room is dark. It's dark enough that I can't get a picture of how dark it is because my camera auto-compensates by brightening everything. It's got a single yellow bulb in a plastic diffuser box over the sink, and a tiny desk lamp. I thought my bedroom the previous night was dark, but in lighting quality this room resembles the less salubrious parts of a school boiler room. It's dark enough that reading isn't feasible - I'll just exhaust my eyes. I almost think it would be brighter - although colder - under a streetlamp outside.

Thing two: I have forgotten the cable for my actual camera, so I won't be able to get any photos off it until I get home. And I've almost filled the SD card, which means I either need to manually delete a load of old photos, or restrict myself to only 17 more decent-quality photos. Sigh. Maybe I can buy a new SD card? Although I'm sure that'll be extortionate as well...

Thing three: adaptors. Switzerland has a rounded two-pin arrangement, like the rest of Europe, right? Well... no. It's a bit more complicated than that.

To boil it down to very simple terms, the Swiss use socket pins which are approximately 0.2mm thinner than those of other European plugs, because they can. This means that you cannot physically cram the plug of a normal European adaptor into at least some Swiss sockets. And of course, I had not grasped this bizarre fact because why, why would I check the diameter of the otherwise-identical two-pin plugs????

Thankfully, the hotel was able to lend me one for my stay in Zurich, but I'm going to need to (sigh) go and buy one. If you're travelling to Switzerland, make sure you bring a Swiss-compatible adaptor!