So, guess who spent the morning playing with owls?

Hint: there's a clue hidden in the photo below. See if you can spot it! 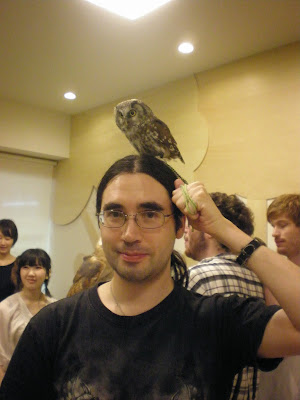 For a couple of weeks now some other students at GenkiJACS have been idly mentioning an Owl Cafe somewhere in town, and I was determined to find out its location before they disappeared back home, so I took the chance to question a classmate on Monday. This quickly turned into a small outing before school today (Wednesday) to Owl Family Hakata (or フクロウのみせ, Owl Shop, in the Japanese sign below). 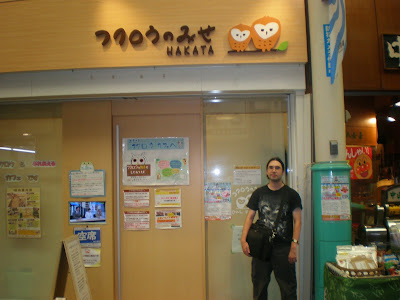 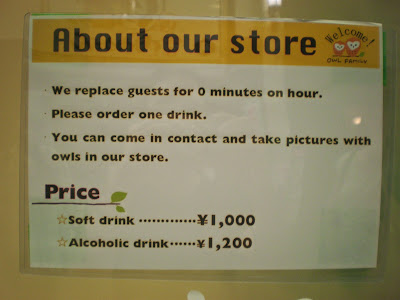 I have no idea. What do they replace the guests with? What is the significance of the non-time? I didn't find a Japanese equivalent of this sign, so it remains an enigma.

The setup is basically not really a cafe. You book in advance, which for us meant getting to the cafe, booking, then mooching around for an hour and a half. When your slot comes up, you are ushered past racks of sleepy owls to a little cafe area upstairs, where you pay Y1000 for a cup of tea or similar - this is a very expensive drink, about £7, but it's the only cost. You sip your drink for about ten minutes, while a lady with an owl puppet runs you through owl-handling etiquette, rules of the cafe, and other important things. 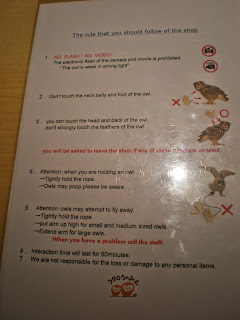 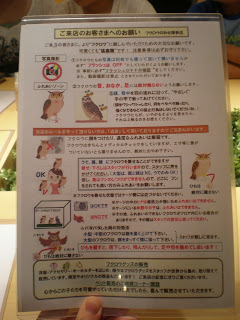 I think it was a little tiresome for the folks who'd been before and heard it all already, especially as it was hard for us foreigners to understand much, but it's obviously very important to ensure everyone has heard how to treat the birds, particularly as there are a fair number of children even on a weekday (how?). You don't want the owls getting mistreated or upset, and you don't want anyone's ears getting ripped off. Between the notice sheets, rudimentary Japanese, having handled raptors before and basic common sense, we were fine.

There's a selection of not-extortionate owl-themed trinkets, but our hardy party were immune to their charms. Okay, there were some deeply sinister owl rings that I rather fancied, but we didn't buy anything. After this, you are allowed downstairs into the owl zone, which is of course the whole point. It's pretty small, so only 10-15 customers are allowed in the cafe at a time. There are two staff downstairs keeping an eye on things, and allowing up to maybe four owls to be handled at a time. Each owl has to be held in a little area some distance from the others and from the owl racks, and facing in a different direction. I think this probably helps avoid them getting shirty with each other.

I thought the staff did a very decent job of wrangling things, from recovering fallen owls (they have a slight tendency to tumble forwards and end up dangling) to answering questions to cleaning up after point 4 on the notes above. Owls may, indeed. When you're not holding owls yourself, you can take photos of your friends holding owls, stroke the owls your friends are holding, or admire the many delightful owls arrayed nearby. The 45-odd minutes went very fast. 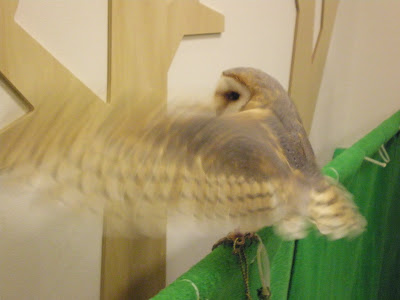 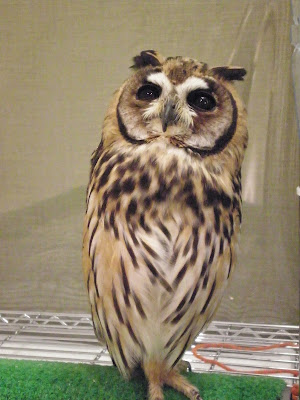 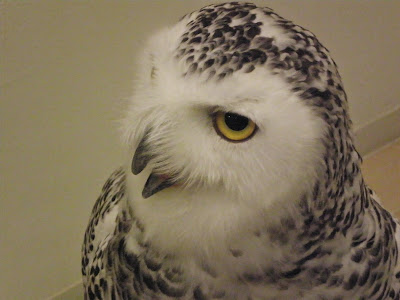 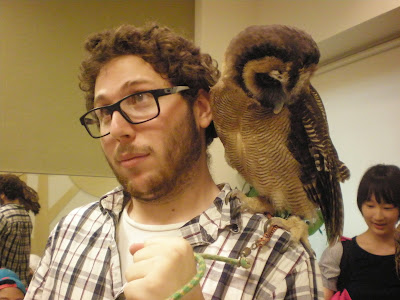 Ii-kun's expression here was entirely deliberate and part of a ridiculous little photoshoot - I'm not heartless enough to post this otherwise!

My camera unfortunately ran out of battery, but I'm hoping to get some more photos from my companions. I got to hold three owls, including the charming little one that sat on my head - I was luckier there than one of my friends, who required some post-owl scrubbbing. The barn owls were particularly soft and delicious to stroke, but others had more soulful eyes. I can't really choose a favourite.

The title comes from the fact that 3/4 of our little party spoke German, and so much German was spoken today. Also because, come on, Eulenstreichelnmorgen is clearly better than Owl-Stroking Morning. Probably also grammatically incorrect, but you can't have everything.