Note: actually mostly written about two weeks ago because I am easily distractible and don't finish things.

As readers will know, I am a pretty shy and conservative person in general, and have some distinct dislikes when it comes to food. This is, of course, why I moved halfway across the world to a city where I don't know anyone and can't identify any of the stuff in the supermarket.

I am imposing some rules on myself in an effort to (amongst other things) keep decently fed and fairly healthy - a problem I'll talk about some other time. A new rule this weekend is: when I go to Sunny supermarket, buy at least one thing I haven't tried before.

I decided to grill the mackerel (well, one - there were three in the pack as it turned out). Research recommended somehow using the daikon and burdock as a garnish on the fish, but were frustratingly vague as to what to actually do with them.

In the end I grated up daikon, burdock and some carrot and stir-fried them all briefly with some red pepper. I wanted some kind of non-root vegetable to go with it all. 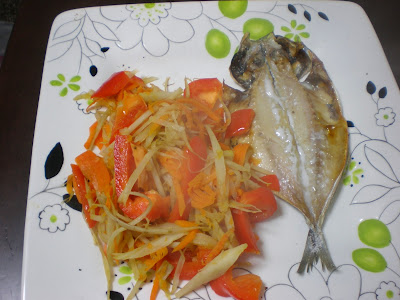 It was pleasantly strong fish, rather kippery but without the touch of smoke, and the tangy flavour nicely offset the simple blandness of the roots, with a nice sharp crunch from the pepper setting it off. Yum. I was expecting the burdock to taste stronger, but it was fairly subtle.

I was pleased to note that between initial window-opening and later obligatory air conditioning, the fishy smell that quickly filled my tiny room was removed just as easily. That's a relief.

I used up the rest of the daikon between various stir-fries and curry - of which more later.

The remaining mackerel also got grilled the next day, with similar results. I ate one, but carefully removed the bones from the other and turned it into a bento lunch. Alas, not carefully enough, it seems! Despite my care, the fish was full of tiny razorlike bones and slivers that made eating it with chopsticks - and in public - somewhat traumatic. It's significantly bonier than a kipper would be, and seems to include some shard-like bits as well as more obvious bones. I would not recommend this fish for lunchboxes; stick to knife-and-fork meals in the seclusion of your own home.