People have asked about a few specific things to help them get a picture of what things are like here, so I'm going to talk about those a little bit. Today: being around town.

My little home is in downtown Fukuoka, in a place called 城南区, Jōnanku, which roughly translates as Ward South of the Castle). Okay, it's not strictly in the actual downtown, but a bit outside it, so it's mostly residential. That being said, town planning works a bit differently here. I don't claim to have the background knowledge to explain it, but I suspect a mixture of land shortage and just not having jumped on the single-use planning bandwagon that hit the UK. Anyway, things here are tall and hotchpotch. Most buildings nearby seem to be at least five or six storeys tall, and so far I haven't really worked out much in the way of cues to distinguish their purpose, possibly because there aren't many. Shops crowd into the ground floor, other businesses continue higher up. There are some dedicated apartment blocks, like mine, but even there the building next door has a hairdressers on the ground floor. It reminds me of Xi'an. That makes me sound kind of like a pseud, but I can't help that. 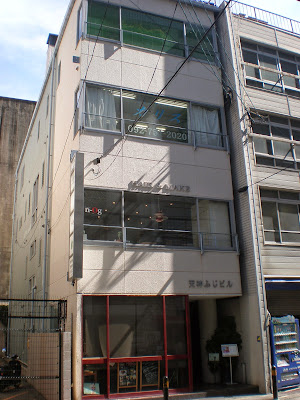 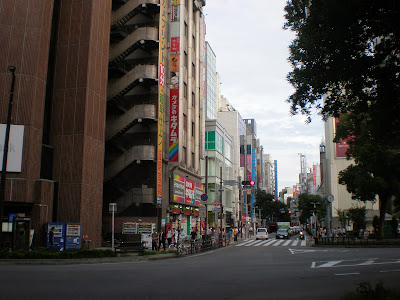 One of the shopping streets closer to downtown. 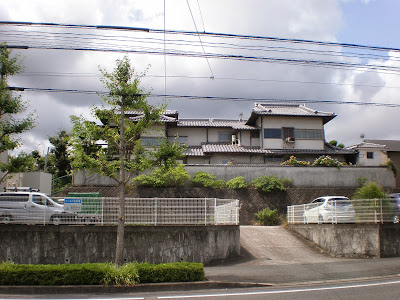 This big, traditional-style building squats amidst much more ordinary houses and shops on a main road. As far as I could tell from this distance, it's just a house.

Further back from the main road, south of my house, shorter buildings crop up punctuated by tower blocks, like young trees bursting through shrubland and reaching for the sun. There are lots of homes that have a distinctively Japanese look, although they tend to look like they once had extensive grounds that have been ruthlessly cropped up to the very doorway. I can't imagine it's true, it's just something about the way the houses are built. It's like that old adage, "dress for the job you want, not the one you have" - these houses tend to look to me as though they wanted to be comfortable begardened residences and, if they can't have a garden, that's no excuse for not looking the part. 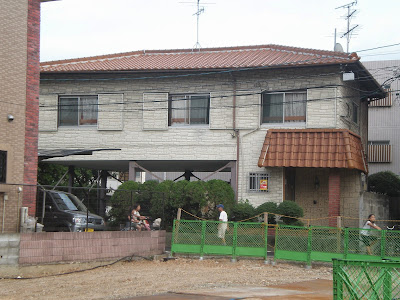 I'm not really sure what's going on here.

In these areas there are fewer shops, but still substantial numbers. Little restaurants with room for four people. Dry cleaners. Tiny greengrocers. Not a huge number in the grand scheme of things, but if you come from a town like mine with entire estates totally devoid of shops, it's a big difference. And everywhere the vending machines, which apparently remain unthieved. I harbour suspicions that they are the forward scouts of some extraterrestrial incursion, lurking and spreading quietly amongst us, only occasionally devouring those foolish enough to try and get a free Pocari Sweat. 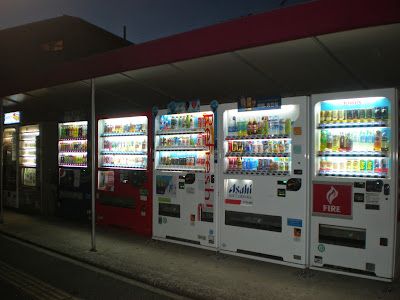 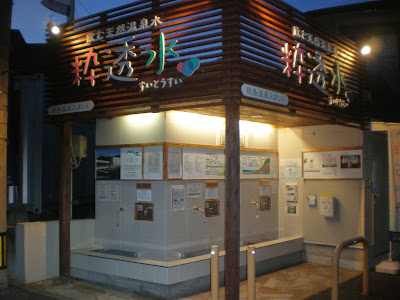 I've also seen this kind of water vending station, although I'm not really sure what it's intended for. Pets? Weary travellers who don't like soft drinks but would happily pay Y100 for some water? Washing shoes?

The streets themselves are a bit different because the vast majority of them are devoid of pavement. There are lots of windy little streets barely wide enough for a single car, with little painted bits that I can only assume are pedestrian-slash-bike lanes. I found it a bit unnerving to start with but have got used to it quickly. Thankfully, they're narrow enough that parked cars are very rare, so it's at least easier to cross the road safely than in many parts of the UK. Once you get into more businessy areas or main roads, there are pavements everywhere, all of them shared with bikes, although not in any organised way that I can detect. Much like Oxford, you must be alert at all times for bikes dashing past, and this is made more complicated by the regular heavy rainfall, which causes umbrellas to sprout like mushrooms and obstruct large parts of the path. But seriously, you need them. 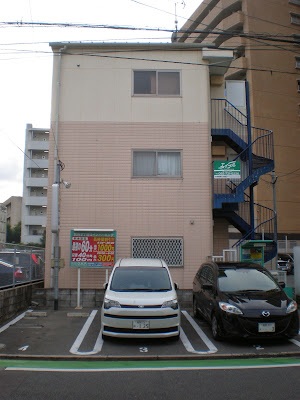 There are virtually no driveways, on account of most places being apartment blocks built before most people had cars, and adding underground car parking is a massive project. I've barely seen any on-street parking either. Instead, tiny car parks have cropped up everywhere, charging tiny fees.

Another oddity for me is the ubiquity of pelican crossings, or rather a variant that I can't track down a name for. Every side route off the main road seems to have one, as well as the main road, which means walking a hundred yards can easily mean stopping six or seven times. While there are buttons, and I've seen locals press them, my take from inspection and some research is that these actually just turn on the bleeper for when the crossing does change, to help people with problem eyesight. Otherwise you just wait. It's been a particular thorn in my side while running as I have to keep stopping. As in so many countries, cars are apparently allowed to turn left on a red light, which is of course wrong.

Being a crowded part of town, the streets are moderately busy, especially at peak times, and crowded with aforesaid umbrellas and bikes, as well as children being escorted around and so on. It's not like a Chinese bus (my default unit of crowdedness) but you definitely need your wits about you. Interestingly I've seen very few wheelchairs or pushchairs and no mobility scooters so far. Anyway, this means pedestrian etiquette is pretty crucial. I do tend to wear headphones, but not as much as I would back in the UK as I'm still getting used to things. There's a lot of glancing around before you walk around obstacles, checking for oncoming bikes and so on. Personally I tend to move aside for bikes out of sheer pragmatism, though I'm not sure if it's usual. Naturally, making room for people or jostling their umbrellas calls for polite inclining of heads and mutterings of "sumimasen" (excuse me) or "arigato" (thank you).

There are a fair number of uniformed folks around, but very few seem to be actual police. Several hotels have door staff, who have been helpful in directing me around (more bowing, more thanking), while outside multistorey car parks there's typically a traffic director to indicate to pedestrians or drivers when it's safe to pass. These blokes (all blokes so far) seem to be mostly large, gentle types with slow smiles who would play the supporting role (amiable, strong silent sidekick) in a fantasy film, and they bow courteously as they gesture with batons for you to pass by.

One thing that makes the skyline different, although it took me a little while to work this out, is the amount of overhead wiring. Japan seems to be much more like America in this regard, putting things in the sky that the British would rather tuck away underground (there are arguments for both, of course, and they have earthquakes here), so this adds to the sense that there's a lot going on all around. In general, with the tall buildings, wires and narrow pavements, it feels like a crowded and slightly claustrophobic place - I haven't yet been anywhere that felt genuinely open. 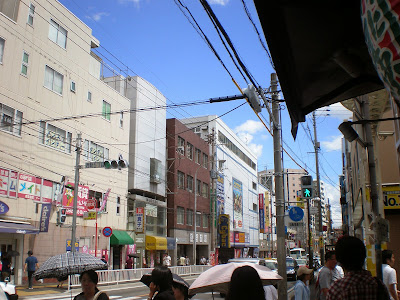