So, following on from a previous adventure, I have picked up a pile of cake from Bel et Bien and will now eat them for your reading pleasure - although, admittedly, mostly for my eating pleasure. 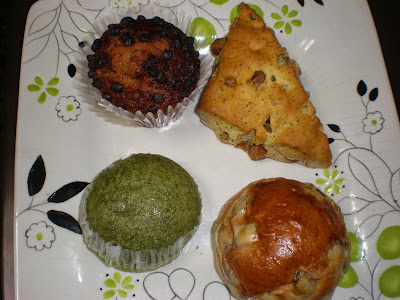 This has a definite scent and taste, of tea. Assam, I would guess? The little flecks appear to be actual tea leaves used in the baking. It's a bit peculiar, but not at all unpleasant. On the other hand, the sense of oddness is pronounced enough that I think it would take a few goes to stop focusing on how unfamiliar it is and just appreciate it as a cake, which is a bit of a downside. Definitely worth trying if you like both scones and tea, though. I sense that this will require further study to acquire the taste, and am prepared to valiantly do my bit.

Exactly what it says on the tin. This is a very traditional bit of vanilla sponge cake with chocolate chips. No unexpected fillings to drip on your shirt as so many muffins lamentably do; it's fairly light and not particularly rich, so didn't make me feel stuffed after eating it. It's honestly more like a general chocolate chip bun than what's usually sold as a "muffin" in the UK. Very acceptable, would eat again.

Yeah, I don't remember what this was called.

It has a soft spongy texture; neither rubbery not squidgy, and very slightly sweet. There's a faint flavour and aftertaste that might be maccha, a kind of strong powdered green tea - a lot of things are maccha flavoured here. It's entirely inoffensive, but equally isn't especially interesting. If you like pretty plain cakes, this is probably a decent bet. If you prefer something studded with chocolate, sprinkled with sugar and filled with cream, less so. I'd recommend eating it alongside something with a bit of flavour of its own, like a milky tea - coffee seems a poor choice because the strong taste would completely mask the flavour of the cake.

This is somewhere between a hot cross bun and a date-and-walnut loaf in terms of texture. It's studded with what appear to be adzuki beans (the ones used in the ever-popular red bean paste) which do in fact taste a bit like dates. Another mild cake, it's a little odd for my taste - having all the beans embedded in the crust means it's unbalanced. Biting into the cake gets you a mouthful with an awful lot of bean, which has a slightly sweet claylike texture, while the cakey middle part is very bland. I suspect I'd have preferred it more evenly distributed so the beans would be a counterbalance to the sponge. Not a big fan, but equally I wouldn't turn down a homemade version or a gift, it's not revolting or anything.