So last weekend I finally fulfilled one of my ambitions and made it out to the sea. I've planned to do this a couple of times previously, but it always fell through one way or another. On one occasion I sort of lost my way and ran out of time to see both the library and the seaside before I collapsed from hunger. Other times I didn't wake up early enough. Sounds silly, but it's a real issue because of the weather here: if it's 30C and the sun is beating down by the time I leave the house, a 40-minute walk each way plus walking along the shore is a deeply offputting prospect. 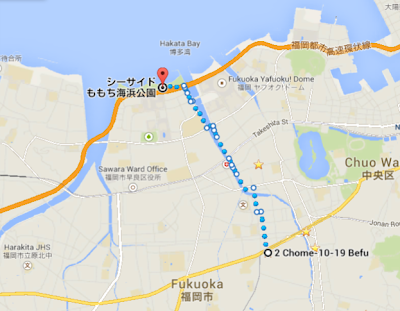 This time I was up and out by about 7.30 and able to reach the shore area by soon after 8. I stopped in an interesting little circle to eat some cocoa-laced bread and have a drink. 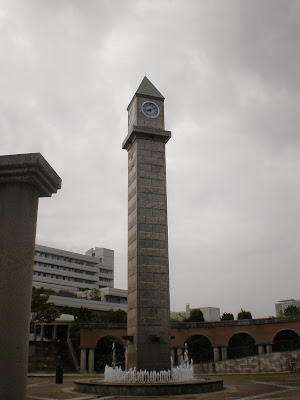 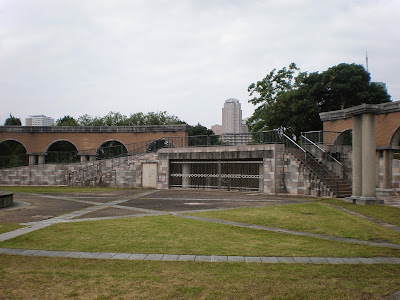 I assume that is where they release the bears. 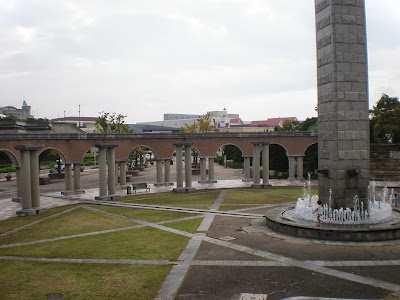 I too am not sure what this place is for. I'm sure any resemblance to a massive occult ritual circle complete with viewing gallery is entirely coincidental. 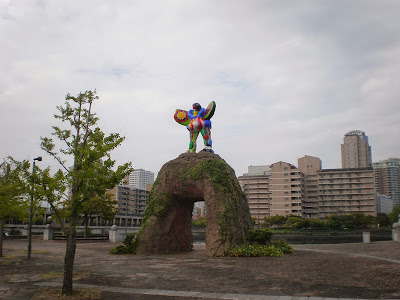 I have no idea. It appears to be gigantic, angry pigeon in some kind of neon plastic Transformers outfit, preparing to give its world domination speech to an assembled crowd of minions. Or possibly an enormous clown representing Fathers 4 Justice?

The actual shore area gets a bit confusing. As you approach, all kinds of odd buildings rear up in strange road configurations, so you have to weave and dodge around them to get closer, slowing you down a lot. The chief offender from my line of approach is the local baseball stadium and attached museum. This is the area of Momochi, for which the beach is named. It's a reclaimed bit of seabed now filled with commercial stuff.

I did eventually find my way to the beach, though. 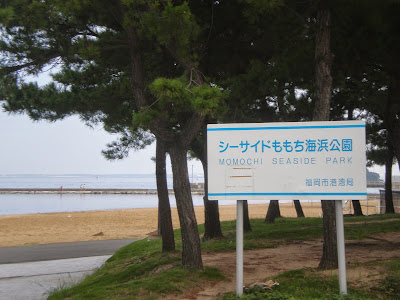 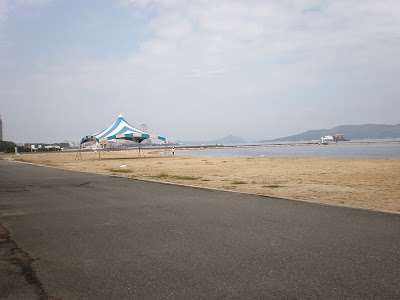 Ah, the Fukuoka seaside! All the glamour and romance of Rhyl, here at your fingertips. 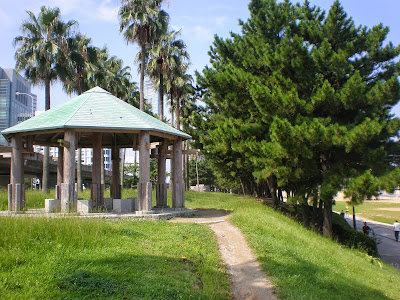 This bit is rather nicer. As well as not being directly on a road, it features the first bit of actual grass and trees you can walk in that I've seen since arriving. I sat here for a while reading and cooling down after my stroll along the beach. 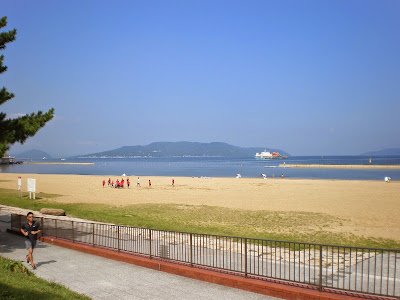 This bit begins to rival Crosby front, although it's sadly lacking in soothing wind turbines. 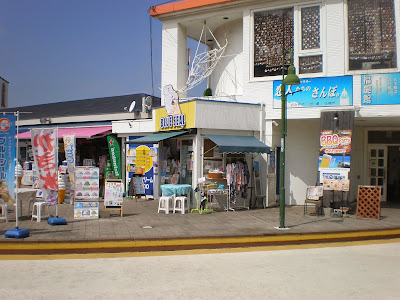 This noble shop at the west end of the beach sells ice cream, and is thus the most important facility for some distance around. There were some other shops too, but I've no idea what they were. 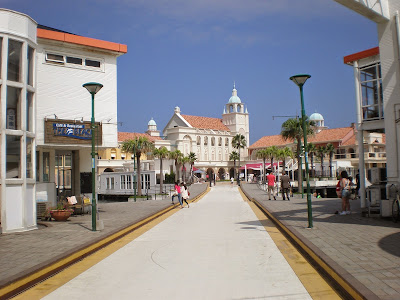 This seems to be a hotel nestled amongst the shops. I couldn't get that close because uniformed security people were standing around, so I'm not entirely clear what it is. 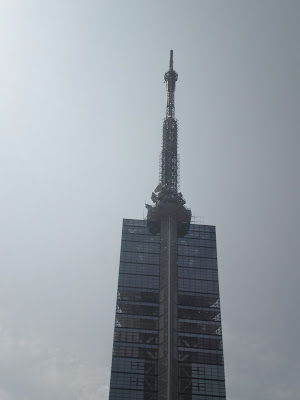 I believe this is Fukuoka Tower, Japan's answer to Blackpool Tower.

I had a nice relaxing couple of hours loitering around the beach before I headed for home and lunch. And promptly got lost again!

It's a pleasant enough little place, with a tiny bit of a breeze. I was really hoping for the kind of bracing fresh sea-breezes offered by my home shores, but I think I'm going to have to accept that Fukuoka just doesn't have fresh air. I wouldn't make a special trip to see it, but for GenkiJACS students it's likely to be an easy trip, either because you're living in the apartments around Befu and Ropponmatsu, or by taking the Hakozaki or Kuko lines from the school. If you like heat and blazing sun then a summer visit will probably suit you; I'll be restricting myself to early-morning trips until the weather changes. There's a reasonable amount of beach given it's a city, so you can have a bit of a walk along it, quite probably the longest road-free walk available in Fukuoka.