One of the things that appealed about GenkiJACS when I was looking for a school was the wide array of non-classroom stuff that's available. As well as a range of socials, excursions and other extracurricular opportunities, there are two kinds of cultural classes available: traditional culture and pop culture.

While my main interest is actually in the language (yes, I know, I'm weird) I am also interested in culture in general. There's a pretty wide selection of different activities in each of the categories, so I think they repeat about every five or six weeks? This means anyone coming for a shortish time probably won't get to try everything, and that over a medium-length stay there's a good variety of activities to try. Mostly these are built into specific Traditional Culture and Pop Culture courses, but anyone can join in (space allowing) by paying a fee for the additional class.

It's slightly cheaper to opt in for a whole week, but because I'm staying for a long time, I want to eke out the activities over my stay so I don't run out of things to do. I won't want to try everything. Taking just the odd class also means my schedule stays more or less level, rather than having some weeks far busier than others. All that being said, I did in fact take three classes in one week at the end of my first month, because they were all interesting and I felt like it.

Looking over the range of courses (which are shown on a huge whiteboard schedule) I'm interested in about 90% of the traditional culture, but only a small proportion of the pop culture (like the manga art class). They're tailored to particular audiences, and I happen to not be especially into a lot of the pop culture things, but they seem pretty popular with people who actually know about Japanese pop culture. At the risk of sounding like a snob, I'm not especially into pop culture in general - mostly because I have my own very specific corners of nerddom to retire into. On the other hand, I believe one of the visits is to a cat cafe.

The first week's classes were Cooking, Furoshiki Wrapping and Traditional Painting, all of which were intriguing. Okay, I have no history of wrapping stuff, but if you've read any of this blog so far and not twigged that I like food, you may be a little slow on the uptake. All the culture classes are run under the auspices of Kayoko-san, who leads the students to various workshops or sites of interest, explains everything, and translates for the instructors whenever it's necessary. She's fun.

As it turned out, we had two fun activities: making makizushi (stereotypical rolled sushi) and making udon noodles. Both from scratch.

The udon was relatively simple: mix flour and water into dough, knead it thoroughly, leave to sit, roll thin and slice into noodles. Not easy, just simple. One classmate was amazingly good at this, and most people were fairly shy, so he ended up doing a lot of it. I'd actually have liked to get more involved but felt guilty pushing in; navigating this kind of thing is tricky, especially when people are from multiple countries with different cultures and languages. Getting the dough to the right thickness, and slicing the noodles finely, required a fair bit of concentration.

While the dough was sitting, we made sushi. First, we had to make some omelette to form the middle of our sushi. These used a square omelette pan that I've seen frequently in Japan - it seems much better than a round pan (easy to get a broad spatula underneath!) so I'll probably try to bring one home. The final sushi involved omelette, chicken scraps, cucumber, and some long thin salad vegetable I didn't recognise. A mat of dried nori (seaweed, the same used in laver bread) was laid out and spread with a thin layer of sushi rice - this was the hardest part of the whole business, because a substance consisting of large, irregular sticky grains is not easy to spread evenly!

The rest of it was simple: carefully arrange a small quantity of the ingredients in the centre, carefully fold up the lower edge (left free of rice) and roll it over the filling, and the seaweed binds neatly with a firm press. Then you lovingly slide it into even strips - I used my thumb as a handy measure, while someone else used simple repeated halving to make beautifully even sushi.

Meanwhile, the udon was cooked briefly in a broth made with some vegetable, probably kombu kelp? With all that finished, we sat down with some green tea and ate. It was delicious. I had to leave one sushi slice, due to sheer lack of stomach capacity, and was deeply grieved. You're getting a lesson and a meal; what's not to like?

Yokoyama-sensei was easy-going, fun company, and clearly knew exactly what she was doing, not just in the cooking (she's a professional, it's to be expected) but in guiding a group of ignorant beginners with poor Japanese through the process, ably assisted by Kayoko-san. I had a really good time here, and would gladly go back to try my hand at something else. As far as I know that isn't an option, but in a month or two I might well be up for having another go at the same thing. 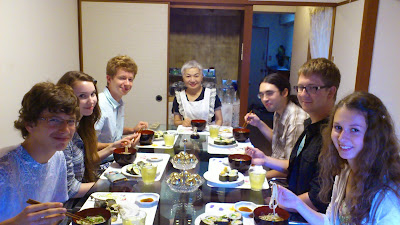 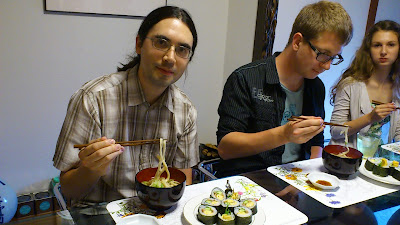 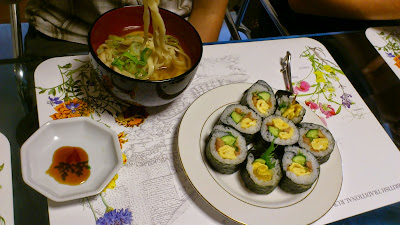