This is another of the Traditional Culture offerings at GenkiJACS. They're ending up spaced out because it takes me a while to write a satisfactory post, but this one was actually the day after the cooking class.

Our class was run by 高倉 Takakura-sensei of Mame's Ribbon. She covered two types: furoshiki wrapping and modifying paper bags. Sadly, I have only one in-class photo of this. We moved pretty fast and both hands were busy wrapping most of the time, so there wasn't much chance to take photos.

The bags were fairly ordinary stand-up paper bags. We modified these with a mixture of origami-like folds and small cuts, eventually transforming the bag into an imitation button shirt, which we decorated with a ribbon for a tie. It's not something I particularly see myself doing (office wear doesn't strike me as something to inspire delight), but it was an interesting exercise. 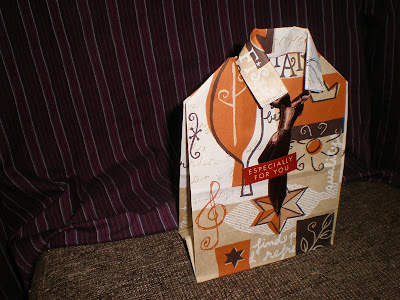 Furoshiki (literally "bath cloth") are a kind of traditional cloth that was originally used to wrap up clothes while you were in a public bath. There was some suggestion they actually started out as a kind of changing mat, but I'm not sure if I got that right or if there's much evidence. Anyway, they are traditionally used to wrap things in Japan, including some kinds of purchases, presents, and also lunchboxes. They're flexible and can be turned into all kinds of things, made into ornate decorations, or used to create a handle to carry something.

We went through the basic two knot types, which were more or less a granny knot and a kind of reef knot. We then used these to create a variety of things, including a simple bag, a parcel, a way to carry two books of similar sizes, and a kimono wrap for a wine bottle! 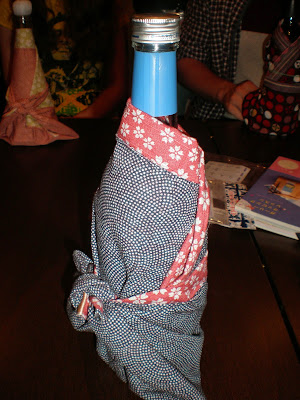 As before, Kayoko-san escorted us and handled translation as necessary. We had a short introduction to the history of Japanese gift-wrapping before we started, and more details filtered in as we went along. There isn't a huge amount to say there (although undoubtedly there's more to it than can be sensibly covered in a short practical introduction) but I quite enjoyed it.

This class was pretty interesting, and the teacher was nice. It felt difficult to fit everything into the lesson, though, which was a shame - with travelling to the studio and back, and the faffing time while people find seats and root around for objects, the two hours or so assigned to the classes sometimes don't feel very long. Sounds like a complaint, but you'd probably rather have people wishing for more than getting bored, and I reckon my tolerance will be higher than some people's. This is especially true as I sign up for each class, whereas people registered on the culture courses just attend all their assigned culture lessons, and may find the odd one isn't to their taste.

There was also a slight practical issue, in that we had really one or two more people than comfortably fitted - wrapping things properly takes a fair bit of space, and there were definite issues in that regard, although everyone was accommodating as far as possible. There's only so many people who can fully unfold a piece of cloth on the same dining table at the same time. Similarly, coming up with enough objects to wrap was a slight problem, and a couple of people ended up with things that couldn't quite be wrapped as intended, so I do have to mark the experience down there for future reference. I was lucky enough to end up with things that worked.

As with the cooking, I'd have liked a bit more time - in this case, to go through this in a more relaxed way, and maybe try some of the exercises more than once to help them stick. Honestly, I don't think I'd remember any of them unless I found some instructions. I'd put it as a lower priority than the cooking class, but still something worth doing if you have the time. If you're a craftsy person, particularly the sort of person who likes getting into handmade cards and ornate gift-wrapping, it'll obviously be correspondingly higher up the list.

Although there was nothing to eat this time, we did all get a furoshiki as part of the class, which I'll probably use in wrapping Christmas presents this year. I'm tempted to look out for more, but so far I haven't actually found a shop that stocks them, despite being assured they're cheap and easy to find. I suspect that, as so often with touristy things, Fukuoka residents probably don't often want to go furoshiki shopping so aren't entirely on top of the market.

Email ThisBlogThis!Share to TwitterShare to FacebookShare to Pinterest
Labels: GenkiJACS