Korea in about six hours

So I did get my visa waiver renewed, much to my relief. To anyone wondering, yes, I am back in Japan and allowed to stay here until Christmas.

My original plan was to spend the evening with my friend Sean, being show around some of Seoul where he's currently working. This would have been great - a knowledgeable guide to show me around the place a bit, as well as a chance to catch up with a friend. Due to a four-hour delay in my flight, it wasn't viable, since I'd have arrived in Seoul by train just about the time he was going to bed, and then been unable to get back to Busan. So instead, I had to fill the evening, and the following day, by myself.

This is the first time in a very long time I've ended up in a country where I genuinely had no idea what was going on. I'm really uncomfortable with that kind of thing, and always make the effort to learn some of the language. Even my one-night stopover in Bratislava featured a phrasebook and several days of memorising useful phrases. For Korean, I didn't get round to it. I'd initially thought I was literally going to arrive at the hotel, sleep and then fly back, so there was no point. By the time I realised it was a more extended visit, two days before the flight, I didn't really have time and I was expecting to meet Sean.

So anyway, I ended up in the middle of a large city with a totally different culture, language, writing system and shops. The first night was pouring with rain, so I spent about an hour wandering around looking for somewhere to eat before buying a pack of crackers and some apples and retiring to my room. I just really couldn't face negotiating the whole restaurant thing (complete with unfamiliar food) when I didn't speak a word of the language bar "hello". Too humiliating.

The next morning dawned bright and cheerful, which was a lovely change. I skipped the breakfast, largely due to sleeping in, but I had spotted a Starbucks the night before and decided to pop in. It turned out that they have a different selection of cakes here! What joy. There was a very pleasant shop assistant who I apologised to and then pointed at things. He spoke enough English to cope with this. 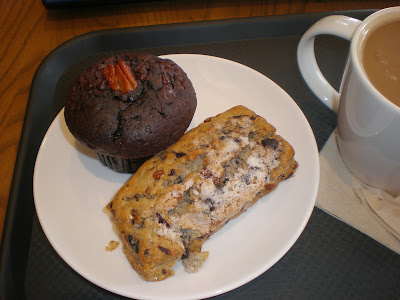 This was, as I recall, a blueberry and pecan scone with a chocolate pecan muffin. Both delicious in their own way, and I am pleased to say, sans gloopy sauce in the middle of the muffin. I did a bit of revision and then wandered towards a large department store I'd seen, since there was nothing else that looked interesting nearby (I felt that the museum would be a waste of my time due to language). Along the way, I spotted a couple of mildly diverting things. Maybe Sean or someone can explain? 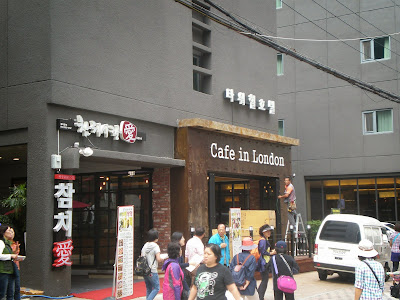 One of the most egregious cases of false advertising I've yet seen. 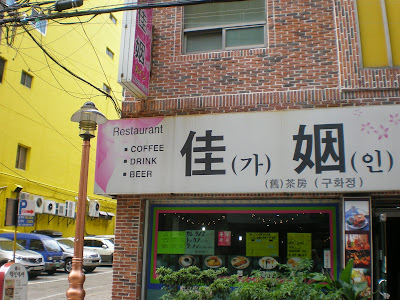 This is not me poking fun at people's English (like I said, I speak zero Korean). I'm genuinely curious, what can "drink" be getting at when both "coffee" and "beer" are listed? With only coffee, I'd have interpreted it as being alcohol. Is it translated from something in Korean with a particular connotation? 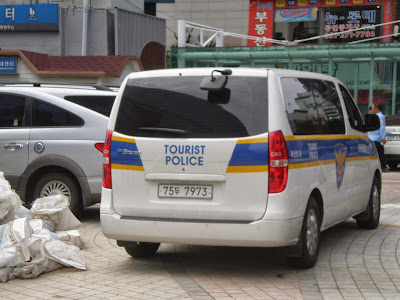 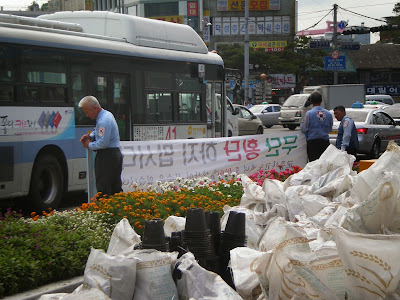 When I passed, there was some kind of big demonstration going on around a major crossroads. Loads of people waving these banners and shouting, looking like striking civil servants or something. Then I realised it was the police, and assumed they were telling people what to do. Then I realised the police appeared to be demonstrating. Any ideas? Maybe this banner helps? I couldn't get a front-on shot because it was a massive crossroads...

Anyway, I wandered in the department store for a bit, which was about as interesting as any department store where you're not planning to buy anything. There was a small art gallery full of photos of groups of people with babies, though sadly I couldn't read the signs. It looked like pop groups or something? I wandered through the food court and got myself a salad, and then decided I might as well head to the airport. Good thing I did, too, as my travel posts will attest.