Our friendly staff can help with all your problems

Never let it be said that the staff of GenkiJACS are remiss in their duty. Their exertions for the sake of us students know no bounds. For example, just the other day, one of my teachers (who shall remain safely nameless) thoughtfully brought in the following just for me: 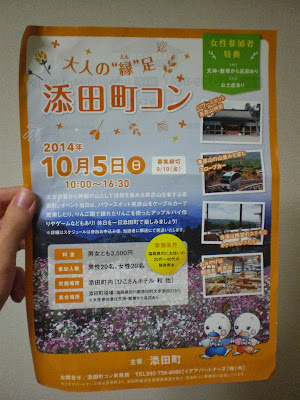 It was being handed out somewhere in town, and seemed practically made for me, apparently.

So here's a very broad overview...

添田町 (Soeda) is a town a little way from Fukuoka, with a rapidly declining population (halved since the 1960s). With the loss of the coal industry, it's now an agricultural town, and a fairly isolated one at that. Seems, ah... peaceful? unspoilt? Other words that aren't "backwater"? In fairness, I should point out that the town I come from is about the same population, has a far less attractive setting, and almost certainly far less to do of an evening. Glass houses, and all that.*

The flyer is an invitation to a dating event aimed at helping bolster that population by luring in residents from across Kyuushuu. Not just any dating event, mind you - this is an official event put on by the local council. I am suitably appreciative and amused. This ties in to some mild teasing that was going on in some of our classes, so I can sort of see sensei's train of thought!

I have seen a vaguely similar idea in the UK, aimed at helping single farmers find love, but as far as I remember that wasn't sponsored by the government. Clearly Japan is more advanced in this field.

The flyer promises a delightful day in the mountain town: a trip to a hill that's said to flow with mystical power, visits to the orchards, making apple pie, and various games. Sounds like fun!

The lower text I wrote out comes from the prominent top-right green box, and is duly significant: it offers transport and a free gift to female participants, which I suspect reveals the main point of this event. Like the British farmers, Soeda is probably particularly short of wives. From everything I've heard, the life of a farmer's wife isn't that much fun, and perhaps the local girls preferred to move away to the cities if they expected nicer lifestyles there. It does allow men to join in as well, but they're clearly less of a concern.

Since someone is bound to ask: no, I won't be taking up this offer (I don't think I'd even count as a local resident, so I probably couldn't if I wanted to) but I appreciate the spirit in which it was meant. My teachers are great!

* In case of confusion, I should point out that this is a reference to a metaphor. My hometown does not in fact feature any glass houses, which would alone vastly increase the entertainment possibilities offered by the Armpit of Nowhere.