Today I left Tokyo, via Shinagawa station, and went to Kyoto. 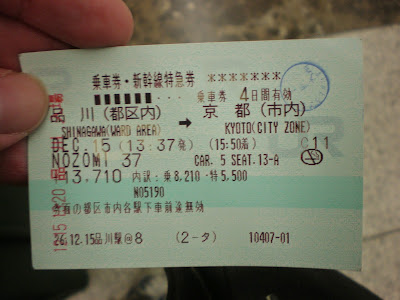 Like most stations, Shinagawa is notable for not being a very fun place to spend more than a few minutes. Here creeps in one of the key distinctions between British and Japanese stations, though; for no sizeable British station would miss the chance to sell you a cuppa and a sit-down. In fact, the sit-down is usually available for nothing, at least for a fair number of travellers. The cuppa, however, is a rare and precious commodity.

Your typical British station features: a branch of WH Smiths (newsagent), a ticket office, two vending machines selling snacks, various benches, inadequate binning, no coin lockers, and an array of tea outlets. On concourse and platform alike - sometimes even on the larger bridges - you will find tea shops, coffee shops, snack huts, tea dispending windows, and even the odd mobile tea cart. Providing you're at any kind of intercity destination, it's almost impossible not to buy a cup of tea, and even many ordinary stations have somewhere to buy a cuppa. Of course, if you want any food, your options are usually rather more limited: a burger joint, an M&S sandwich or salad, maybe the odd pasty. A few places feature grill bars and suchlike.

A Japanese station's key features appear to be: a ticket office, a substantial but inadequate number of coin lockers, a bewildering array of restaurants, various vending machines dispensing drinks, no bins whatsoever, no benches whatsoever, countless vendors of omiyage (small, usually edible, souvenirs), and if you're lucky, one coffee shop. If you want a drink, you're assumed to get something from a vending machine. If you need a hot drink, you're assumed to go to a restaurant and eat something. You have many options for hunger-appeasement, though curiously very few of these offer seating either.

To cut a long story short, what I ended up with was dragging my own bodyweight in luggage round and round Shinagawa, unable to find anywhere to lock it away, growing increasingly irritable and tired as I sought somewhere that would sell me a hot tannin-based beverage. Eventually, I found a small corner in a little shopping area attached to the station, where I could get some lunch instead. They did a very passable croque monsieur. 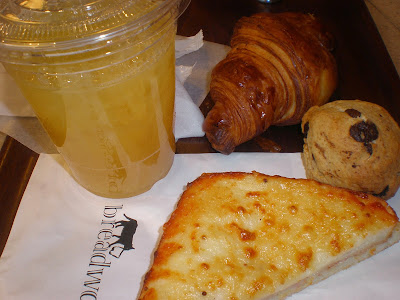 It was only when I actually went to board the shinkansen that I discovered a tea stand next to the gates, and promptly downed a cup before boarding. This was lucky, because the on-board staff are apparently qualified ninjas (I assume the market for ninjas is fairly limited these days), and so you never notice the refreshment trolley coming until it's past you and halfway down the carriage.

But, back to Kyoto.

Sadly, I had once again managed to wind up on the wrong side to see Mt. Fuji. Ah well. I did notice that winter was obviously coming, as a couple of valleys had been struck with snow. 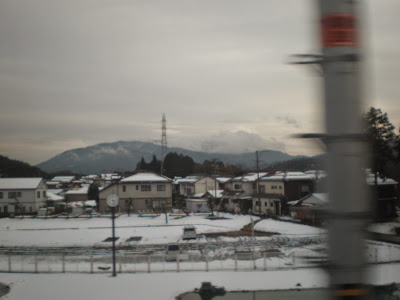 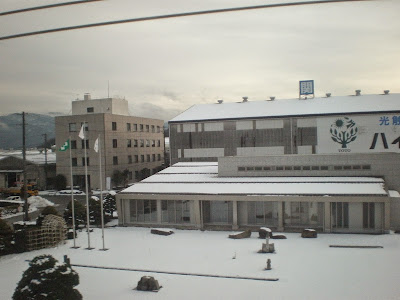 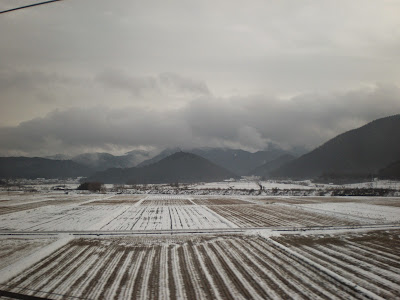 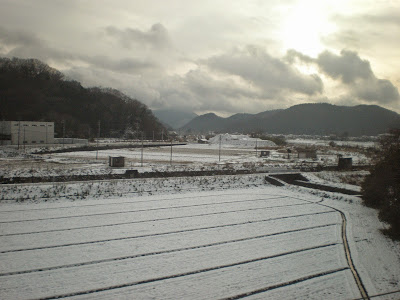 I did manage to find a locker, where I stashed everything while I went for a much-needed cuppa. I even actually found one, to my astonishment. There's a little café where I had a very decent Earl Grey and a slice of lemon cake. Here I attempted to access the Free Kyoto Wi-Fi! that was advertised for visitors. It turns out that to access the Free Kyoto Wi-Fi! you have to send an email to an address and receive a 3-hour free login code. Presumably, I don't need to explain why this is imbecilic.

I also wandered outside and got my first glimpse of Kyoto. 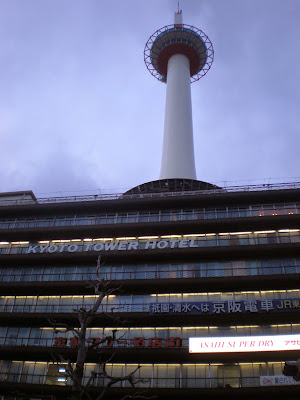 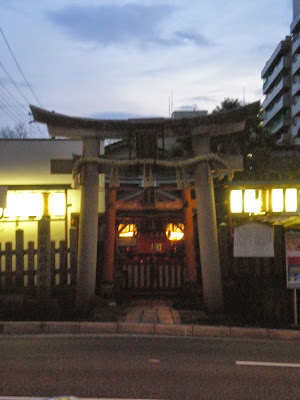 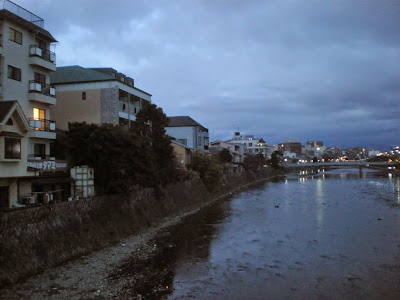 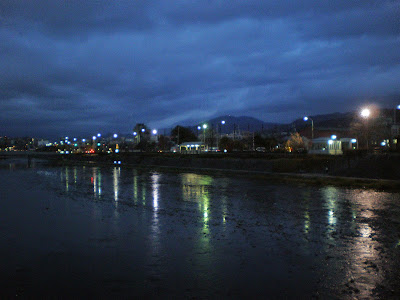 So I had instructions for finding my hostel, based on disembarking from Demachiyanagi subway station. For some reason, though, this station did not appear on the subway maps by the ticket machines. Nor did the station where I was expecting to get on that subway line - a little way from Kyoto station, but from the street map it looked like there should be some kind of connecting line. After some puzzlement, I gave up and asked the information booth.

ME: Hello, I wanted to buy a ticket for Demachiyanagi, but it doesn't seem to be on the map? HELPFUL: Oh, you should take the bus. Here's a bus map, let me highlight the bus for you. Or you can take this one. It won't take you to Demachiyanagi, but is a ten-minute walk okay? ME: Ah, well, I'm not actually going there. My hostel is nearby, and I have instructions for getting there from Demachiyanagi station. It's in Hyakumanben. HELPFUL: Oh, Hyakumanben? Then you should take this other bus. Let me highlight it on the map. ME: Right, but, my instructions are from the subway station. I don't think I can find it from a bus stop. HELPFUL: The bus is much more convenient.

Now, making alternative suggestions is an important part of advisory services. That being said, I can't help feeling that if someone specifically asks about travelling somewhere by a specific method, you should either a) explain to them how to do that; or b) explain why your alternative is better. This is important because, while people sometimes pick transport at random, there's usually a reason for the preference. In my case, I'm a lot more comfortable dealing with predictable trains than buses, which require more attention and leave you at stops not marked on any maps. Plus, it's usually a lot easier to wrangle very large amounts of luggage on a train than on a bus, especially as the Japanese method involves getting on at the back, then predicting your stop accurately enough to slowly fight your way to the front at exactly the right time, while minimising inconvenience to everyone else. I have, in the past, missed my stop because I couldn't achieve it in time.

I think the reason that particular line wasn't shown was perhaps that it doesn't connect directly to the Kyoto station lines? If so, this seems like a very poor reason for not including it, but there may be another. You'd think you could just, y'know, show a map of the city with all the lines on, on the assumption that people might want to get to various parts of it, sometimes requiring two-part connections!

Since I knew full well the subway station actually existed, and how to use it to reach my hostel, I sighed and gave up at this point. I dragged my luggage down the road for fifteen minutes to the appropriate stop, and boarded the train without difficulty. I had a little trouble actually finding my hostel, but got there in the end. As SC had said, the landlady was very friendly and it seems a very nice place. 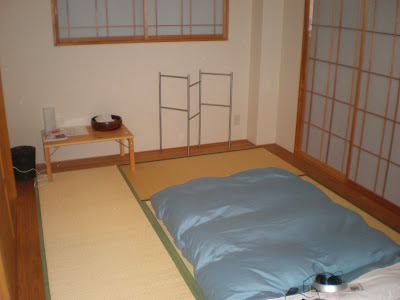 My room. There is a draught coming from the wall-to-wall window, and both walls and floor are permeable to noise, sadly. 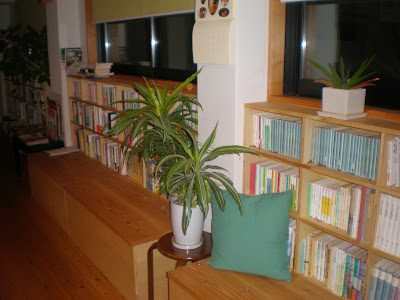 It has its own library in the common room! 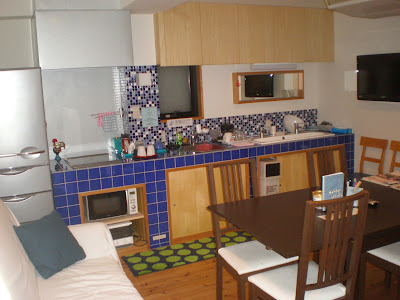 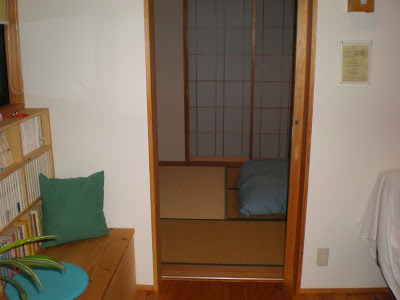 Sadly, this is right next to my bedroom so I can hear everything, and it's sort of awkward walking out past people reading or whatever. I'd prefer a little bit of distance.

After dropping my things, I strolled round the corner for a bowl of ramen. 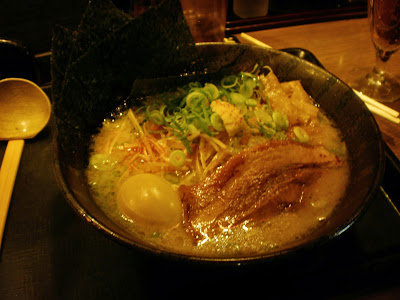 It was okay, but I've had better. Very strong oniony aftertaste doesn't do you any favours in my book. 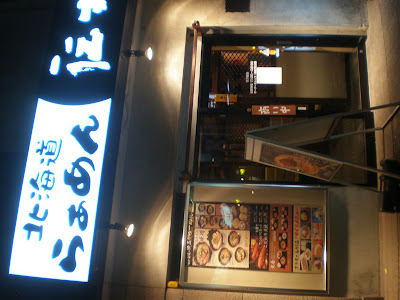 My room was a bit chilly, and sadly I couldn't find a coffee shop anywhere nearby, so I don't think staying in the area of an evening is going to be a great option. It's fine once I dive into the futon, but sitting around reading or typing gets parky. Also, I can only kneel on the floor for so long! So probably I'll need to be staying out in some kind of Starbucks, because let's face it, there aren't many other coffee shops around.