Where Everybody Knows Your Name

Moving home is always a difficult time. You have to wrap up loose ends at work (well, school), bid farewell to all your colleagues, pack an astonishing amount of stuff that you've somehow acquired during your residence, make travel arrangements, clean up the house, exchange farewell cards with your favourite café...

Okay, so a long time ago - six months almost to the day - I first staggered bleary-eyed and heavy-laded into Fukuoka. I spent an hour running around with a ridiculous amount of luggage in 37C temperatures, trying to find the mobile phone I was supposed to collect. Then, sweaty and cross, I lugged a huge amount of stuff from the airport all the way to my apartment, trying as I did so to work out how all this worked. I met my landlord, and went through a thorough explanation of the apartment, all of which I immediately forgot due to exhaustion.

Having dumped everything in my apartment, and napped for about an hour, I took the train into the city. I was already pretty confused by this point, incredibly hot, and thoroughly moody. My Japanese was poor enough that the underground was confusing and stressful. The prospect of struggling with all this for the next six months was very oppressive. But I needed to get my bearings, and that meant going to Tenjin, where I planned to work out where the school actually was so I wouldn't be late when we started. It's also the place where most shops are, and I needed various hings if I was going to live here for six months.

Shortly after arriving, I encountered a Starbucks. Now, I'm not normally a fan of Starbucks, to be honest. In the UK, I usually find most other cafés serve a better cup of tea (not surprisingly, they are American, it's not their thing), am not a huge fan of their snacks, and object to their tax evasion. But in this case, there are some crucial facts:

And so I went in, and stammeringly ordered a coffee from a very kind, patient person, and apologised for my poor Japanese.

It's strange which relationships end up being important to you. Most of the time, everyone is anonymous to everyone else. Occasionally, someone has a significant influence on your life, often without even knowing. Often, you do the same to other people and never know. What's important all depends on your situation: that phase of your life, that day, that very second.

Since the first time went so well, and it turned out to be right in the centre of town and on my route to school, I went again. And having virtually no grasp of traditional Japanese shopping etiquette, I did all the wrong things: said hello and goodbye to the staff, made off-the-cuff comments while I ordered or waited for my drink, asked how they were. They very kindly permitted all this, answered nicely, and considerably reduced the amount of formal Japanese they used talking to me in order that I could understand a word of it. After a while, N-san politely asked me my name and introduced herself.

A little while later, when I turned up to the café, N-san introduced me by name to the lady serving me, and from there events were more or less inevitable. I felt very comfortable and welcome, and started going regularly before school. It was a convenient place, I worked out how to order tea the way I liked it (although quite soon everyone remembered), and could come in early to study while being just a few minutes from school, so I avoided the rush hour. I started having breakfast there quite often - they had nice scones, which felt more substantial and healthier than what most cafes serve, though admittedly that's close to damning with faint praise. Fruit isn't typically on the menu in Japanese cafés, but I'd often eat a banana at home before heading to Starbucks.

Towards the end of my stay, I was going more or less every day, either for breakfast or just a pre-school drink. The staff all recognised me and welcomed me, and chatted a bit as they took my order or came past to clean tables, and I felt very much at home there. This was only emphasised by the contrast with most cafes; as I said, Japanese culture is for shop staff to be formal and polite, and therefore distant. The crew at Starbucks were interested in my plans, and said how sorry they were that I'd be leaving soon, and to be sure and say goodbye to them before I did.

Since the staff had always been so kind and welcoming, I wanted to show my appreciation with a little something, so I got them a card, and a couple of little edible gifts to share out. This, my second farewell card, was very slightly easier to write than the first, but required no less attention. Whereas my friendship with M-san was pretty simple, it took me quite a while to work out exactly what I was grateful to everyone at Starbucks for, and research how to express this, while trying not to go overboard. Effusive gratitude is generally a bit alarming (at least in my culture, I'm still not sure about Japan!) and it's not exactly common practice in the first place.

I was also sorry that I didn't know many people's names; it still felt rather intrustive to ask anyone, so I only knew N-san and one colleague. People in customers service are in a slightly awkward position, as I know myself, and asking them to reveal personal information always seems inappropriate, particularly as women tend to get a lot of unwanted attention.

Anyway, I went to say my final goodbyes on Friday, taking my little bag of gratitude with me (along with my enormous rucksack), and had my usual breakfast as a kind of symbolic gesture. I wasn't entirely surprised when N-san and a colleage came over, since they knew I was leaving. What I hadn't really expected was that they were bringing me a farewell card signed by all the staff! I was very touched, and somewhat flustered, and because the cafe's busy even early on they were a little distracted by keeping one eye on work, so handing over my own bag and stammering my gratitude was less smooth than I'd have hoped. 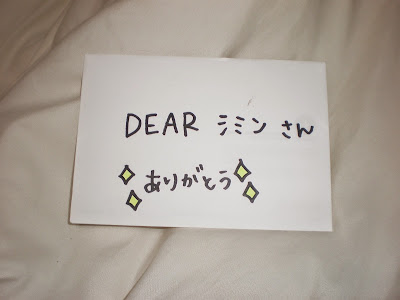 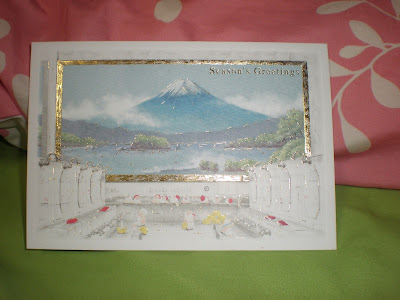 Inside not pictured for obvious reasons.

Still, I got to say thank-you to some people who have been very important in forming both my impressions and my experiences of Fukuoka. That first, often-reinforced impression of kindness and friendliness helped me to cope with the many difficulties of moving to Japan, and my regular fixture of study breakfasts there was a significant facet of my life in Fukuoka. I was able to get a photo taken with N-san (not posted to protect her anonymity), and wish I'd had a chance to get one of everybody.

Today I went to a different Starbucks and got a cup of tea from a stranger; I'm already missing them.

That's always the problem with building warm little nests for yourself. It's cold when you have to fly.