So today was my last day at GenkiJACS.

As usual, there's been a gradual sense of moving towards this point - a mixture of winding down and tensing up. I've gradually reduced the amount of revision I do, especially vocabulary drill, because there's no particular need to maintain a high momentum when there won't be much coming in after this week. At the same time, obviously I've been getting ready to leave my apartment (at the crack of dawn tomorrow) and mentally preparing for the break from school, friends, Fukuoka and life as a student.

Two of the three students in my class left today, so I think this sense of ending pervaded the class. Although Y-kun isn't leaving, he's having a break now and will be merged into another class when he comes back.

I handed in my evaluation form for the school, which everyone is asked to complete. I think this is a great thing to do, and completed it so diligently that it didn't fit in the space available; I had to write mine out on the laptop and print it at school! Well, in my defence, a) I'm very thorough; b) I've been thinking about all this stuff for six months, partly for blog-writing purposes, partly because I'm interested in things; c) for both work and leisure, I'm rather in the habit of writing long detailed analyses. My last form like this was discussing my part in a multimillion-pound project and covered many pages. A four-line box just isn't going to cut it! Normally the form's handed out on the Friday morning, but I actually asked for mine on Tuesday so I could consider the questions carefully. I feel old now...

While I do want to share my overall thoughts on my experience, and the school, I'm not going to post the form. It's not the purpose I wrote it for, and I don't think it would be constructive to share specifics like that.

Over the week I've been having my Last Class with various teachers. Today, somewhat to my dismay, we were scheduled for four hours with H-sensei with a strong focus on kanji and new vocabulary. I'd have preferred something lighter and more conversational for my last day! However, we persevered valiantly and came triumphantly to 2pm.

2pm is Ceremony time. This is when leaving students, and their supporters, assemble in the lounge to receive certificates and (to my horror) give a speech. Fond as I am of the sound of my own voice, I am very much not a fan of speeches, either my own or anyone else's. I actually considered skipping Friday and collecting my certificate informally on Thursday, which happens fairly often when people's plans don't allow them to stay, but I decided that was silly. I didn't want to miss out on part of the student experience out of nerves, nor waste four hours of tuition; besides, it seemed disrespectful. Thus, I sat down on Thursday night (having been too busy beforehand) and wrote a four-line speech.

This may seem a bit of a cheat, but you have to remember that nobody's really there to hear my speech. At Ceremony, there are anywhere from two to twenty students leaving, all of whom spend a little while getting certificated and speechifying. At the most basic, this takes about a minute apiece, but some students do end up giving much longer speeches. In some cases they're nervous and emotional, so hesitate a lot, while others simply have a lot of thanks to give. A few just really like giving speeches, as far as I can tell. Just a couple of weeks ago, I was near the lounge and heard the same student giving a speech for at least five minutes. Without wanting to be personal (and I don't know who they were, so it isn't really), this doesn't seem like the point. It's not Your Ceremony, it's Everyone's Ceremony, and keeping things short and slick seems like politeness to everyone. It's also a lot easier to remember!

Thankfully, today there were only six students leaving, so we were done quickly. In my case, so quickly that poor Y-kun barely had time to work out how my camera worked before I'd finished. Note to self, don't suddenly ask someone to take photos on your camera, especially if they have a cameraphone they're used to using that's probably vastly superior... ah well. Thankfully it went off okay with no obvious major mistakes. 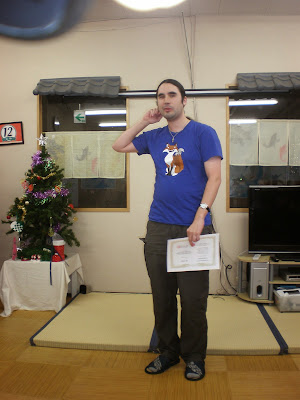 I grabbed a few photos with my classmates and a couple of my favourite teachers, left some contact details, agreed some exchange of photos, and said some goodbyes. 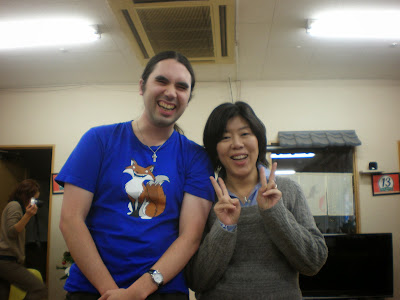 My favourite teacher! Clearly something was really amusing at this moment. I don't remember what. 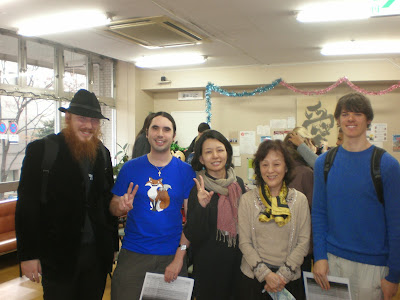 Around this point I noticed that there was a slight mistake on my certificate... 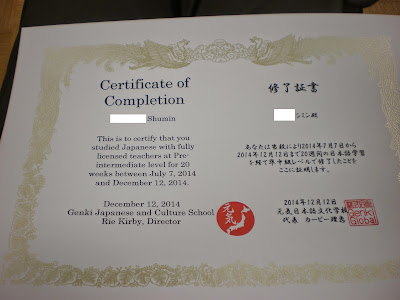 Thankfully I was able to arrange for a replacement, to pick up that afternoon. I would later discover that this too wasn't quite right, omitting a crucial M, but close enough, I think... if I ever need it for anything official I can always ask for confirmation from the school, but to be honest, anyone taking it that seriously is more likely to want an exam result.

I grabbed my enormous rucksack (of which more later) and headed out, waving some farewells as I went. I stepped out into the road and strolled past Mandarake for probably the last time, with a sense of finality. The now-familiar tower of the Catholic centre loomed over me as I strode towards Tenjin station, noting as I did so that I seemed to have got something in my eye.