Osaka, for one night only!

I feel like I'm cheating, because Osaka really is just a stop along the way, but hey. 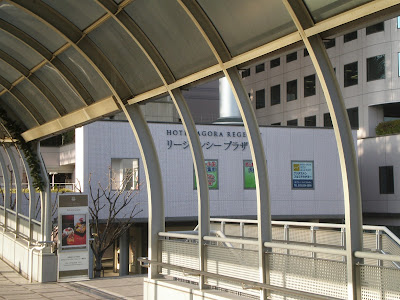 Traditional first view photo! This feels weird because it was a very long time between me getting off the shinkansen and taking this photo. The fact is that I'd not realised how faffy it was going to be: I thought I had one train to get to my hotel, whereas it was in fact three, all of them somewhat inconvenient and not a little confusing. The shinkansen doesn't stop at Osaka at all, and then the Osaka-Sakai stage of my trip (I'm staying in Sakai) was two lines rather than one. Sigh. But eventually I did make it here, and it's always nice to see your hotel is a mere fifty yards from the station exit.

Osaka is... not very different from Fukuoka, to be honest. But I've never been this high up in Fukuoka. My room is on the 22nd floor! 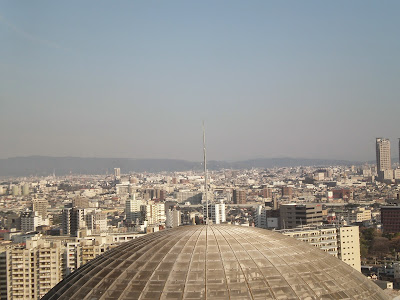 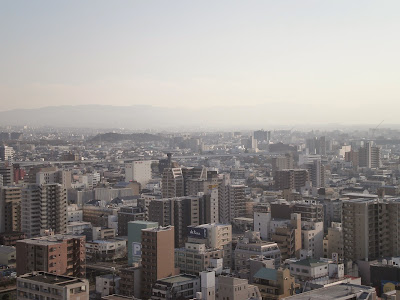 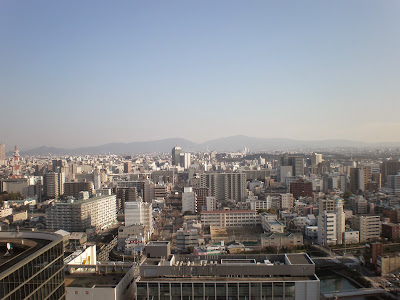 It's a fairly swanky hotel by my standards. You can tell, because the foyer has both a glowy Christmas tree and a grand piano, plus there are five or six restaurants. Each of these charges around £30 for a single bite of food, from what I can tell, and all are too posh to follow the useful Japanese habit of having little models of the food on display. There were a few photos on the website though - a forkful of stage on a plate the size of an Ascot hat, that sort of thing. 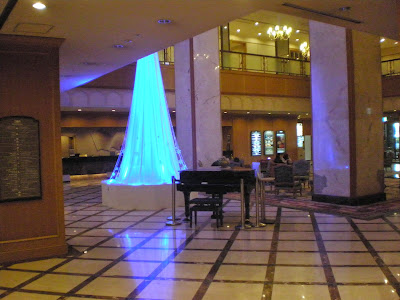 I took advantage of there still being some sun, and it being at least a degree warmer and windless here in Osaka, to wander over to a nearby park I'd spied on Google Maps. 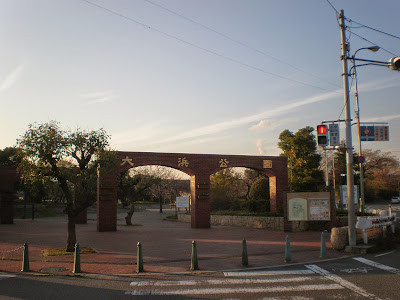 There are a few precious camellias (probably?) in bloom, adding a little bit of colour. 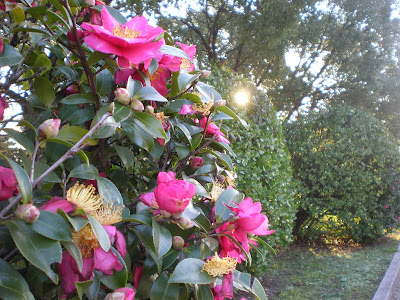 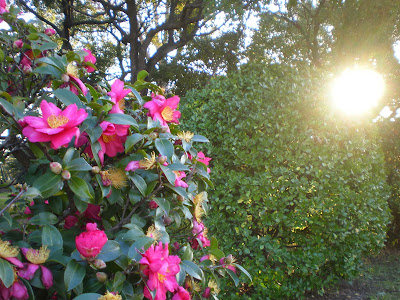 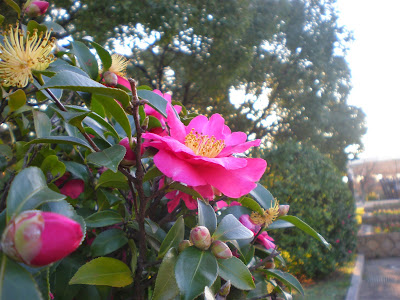 I have no idea what these seedpods are, but thought they were cool. Sparrows and pigeons were picking seeds from them, but were very shy of me and raced off. Don't they look like they have little beaky faces all over..? Especially the last couple of photos. 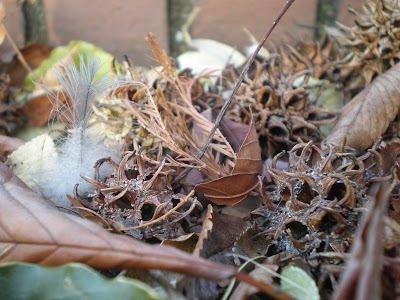 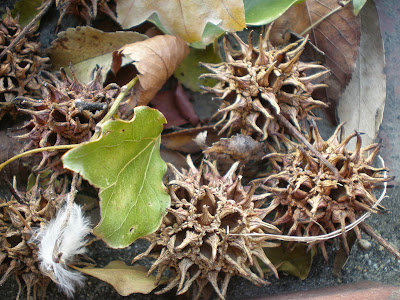 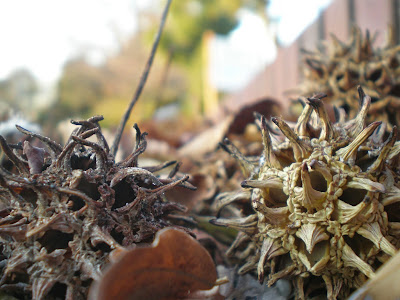 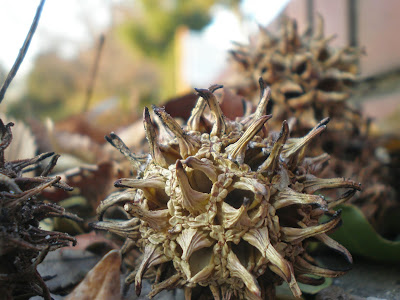 A few random shots of things I thought were stylish. 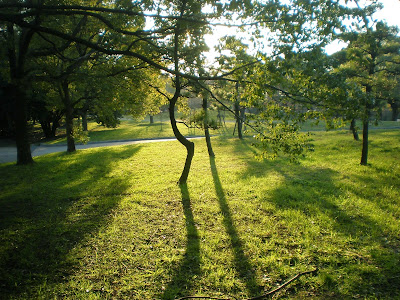 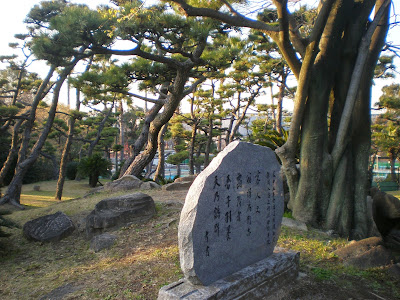 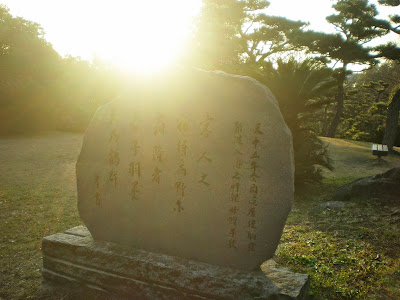 A palm tree. I don't really think of Japan as a palmy sort of place, you know?

And at last - well, not at last at all, in fact very early on - night descends. 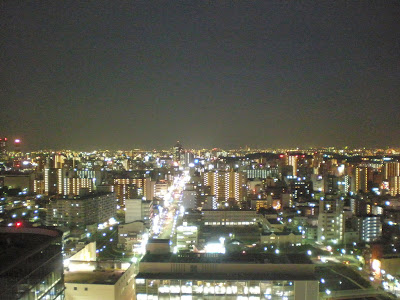 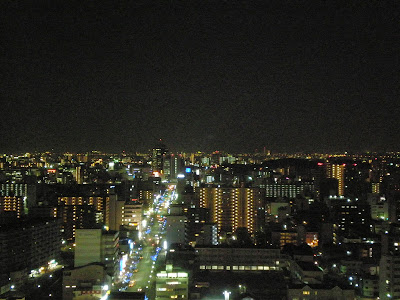 It would have been nice and satisfying and poetic to have a proper Japanese meal to round off my trip, before heading back tomorrow. I wish I could say that's what happened, but no. The restaurants in the hotel were both very reticent and very expensive; they seemed the sort of place where business trips on expenses buy a dozen tiny items between six people and drink a lot of wine, and not used to people wanting to actually eat food to sate appetite. Roundabout didn't seem very promising either: a few tiny places of the indecipherable sort, another Italian restaurant, nowhere interested in showing me menus on the web. I've spent so much time this past week traipsing round alleys systematically searching for places to eat, and I just couldn't face doing that yet again, only to end up plumping for ramen or curry out of sheer exhaustion. I've eaten both a lot.

And so, ironically, I ended up being extremely Japanese, by going to KFC. This is apparently a big Christmas tradition in Japan. I mildly loathed myself - I don't even like KFC! - but it was easy, predictable food, and that's what I needed. I bought an apple and a taiyaki on the way home to try and counterbalance this particular sin. 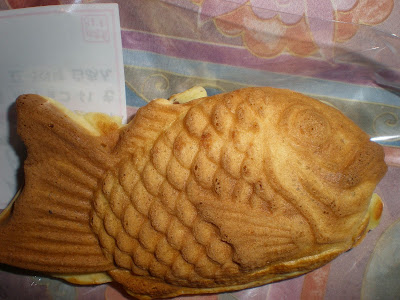 With one thing and another, I've never really learned about Japanese food. I don't know the vocabulary, short of basic foodstuffs and very common types. I hardly ever ate out with friends, and those occasions covered sushi, ramen and okonomiyaki: there's a vast range of Japanese food I have no experience of, mostly the classy traditional style with many small bowls of stuff. It's something I do regret about my trip, but I didn't plan it. That's just how it worked out.

Anyway, up bright and early tomorrow to head to the airport. I can't wait to be home.

If anyone's curious, the blog isn't quite burned out yet. I have a number of posts I didn't get round to finishing at the time, as well as reflections on the experience. And hey, I might always go somewhere else one day.