Every so often throughout the summer, the city puts on various firework events. They're just very popular over here as part of culture, so there's one most weeks it seems. Usually they take place in one of the parks, accompanied by a semi-festival atmosphere.

I actually got myself organised to head along to one of these a while ago. It took place in Ohori Park, a largeish park that's also relatively near my house, which meant the stuffy weather wasn't too much of a pain on the walk.

Because it's not a real festival, fewer people bother to dress up for it, which was a bit of a disappointment. About a quarter of the women were wearing yukata (the lightweight summer version of kimono) and about a tenth of the men, if that. Mostly what I noticed was the sheer volume of people crammed into the park. Large numbers of police had been scattered along routes to funnel people into the gates and manage traffic at crossings. Once we hit the games, everything suddenly condensed until you could barely move. There was a slow circulation of people around the park, on two "lanes" in opposite directions. Since the fireworks started early on, many people had already found seats around the lakeside to watch.

There were quite a lot of stalls around the edges, selling various foodstuffs. My basic plan on going in was to wander for a bit, take in the air, enjoy a bit of a festival atmosphere with the traditional dress and so on, grab something to eat and then go home in a leisurely way.

This rapidly turned out to be a dud.

Essentially the problem was the sheer number of people. It was very difficult to find any space to stand still in, which meant you couldn't really find any vantage points to just people-watch. There were some spaces around the lake to look at the fireworks, but there was some kind of reservation scheme in place that I didn't really understand, so I watched them a bit as I wandered. Similarly, there wasn't any space around the stalls to look at stuff, which left the option of letting the flow of the crowd wedge you right up against something and then clinging on to look at the stuff while fending off stallholders. It wasn't very tempting. I soon realised that although there were a few hundred stalls, there were actually only about four different ones: candyfloss, pineapple, grilled chicken skewers and... I forget, probably takoyaki (octopus dumplings)?

The other mild disappointment was that it wasn't really possible to get any decent photos. For photos you really want space, stillness and privacy. It's hard to take photos of a festival when you're only six inches from everyone's face, and this also makes it rather rude to use flash. Of course, not using flash for a night festival (it gets dark here early even in summer) means not really taking much in the way of photos. There were various people in cool outfits, but mostly women (as mentioned earlier). I'm generally leery of standing around taking photos of strange women from a few inches away without permission, and asking their permission seemed like an awful lot of hassle and a bit of an intrusion, especially considering how hard it would be to actually take the photos, so I didn't really take any.

A few, um, "atmosphere" photos are attached. Which is to say, they aren't very good. 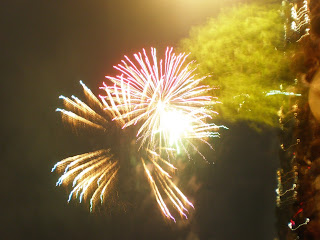 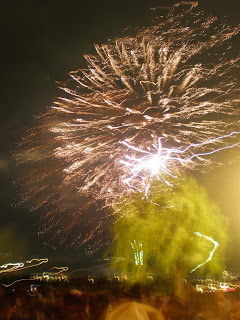 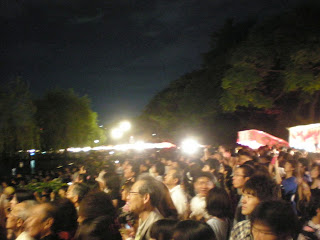 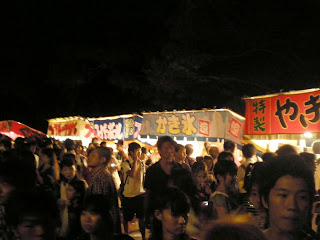 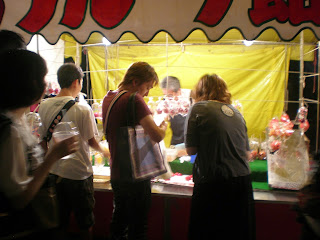 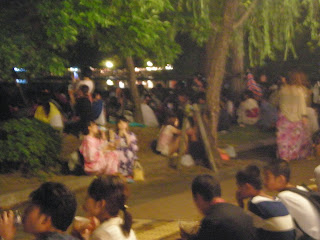