So I recently decided to make bara lawr (laverbread, literally のりパン) for the staff at GenkiJACS. There are various reasons. One is that it came up in conversation a couple of times. I wondered whether people here wouldn't like it, considering savoury seaweed foods are a pretty major thing here. I was interested in the challenge of making passable bara lawr here. And I just sort of felt like it.

The main obstacle is that although nori is very similar to the lawr I'd normally use, it's processed differently. Lawr I buy tinned and boiled; it's soft and salty. Searching for nori, I was only able to find it roasted and dried into sheets or shreds. This makes a substantial difference to the flavour, that evasively indescribable roastedness, and also leaves it far less salty. However, a few notes around the internet suggested that it can be done.

The absolute first step will, perhaps, seem very strange in making a seaweed-based recipe. I went to several shops, and eventually managed to buy a packet of bacon.

I began by shredding sheets of yakinori (roasted nori) and putting it to soak. I was relieved to find the seaweed readily absorbed the water and reconstituted into a familiar green slime, although it took a lot of mixing to break it up from the chunks it had been pressed into, and it didn't quite achieve the texture I'm used to by the time I gave up. I chucked in a bit of salt; I'm always quite conservating about adding salt because of health concerns, and it turned out I should have added more. I also dropped in a little pepper, because I tend to add pepper to most savoury things.

Thankfully, oats are fairly easy to get because porridge is a known thing here, so I added the same volume of oats and began stirring. The small remnants of excess moisture from the rehydration were easily absorbed here. 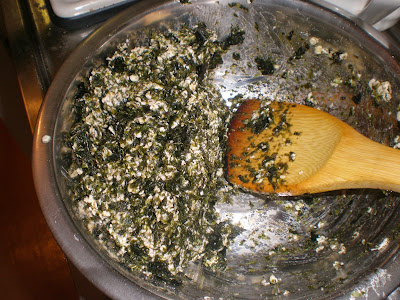 With the mixture ready, I slathered it onto a chopping board and cut it into slabs for ease of cooking. The traditional recipe is for thicker, rounded cakes, but I was trying to make enough for quite a lot of people, most of whom probably wouldn't want very much - either because they wouldn't like it, or just because it's random food being brought into the office. It's not like cooking for a party. So this was less than a centimetre thick and sized for easy flipping. 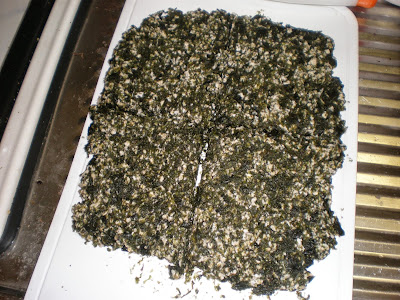 Next, bring out the bacon! Dropping in just a little lard to start the pan going, I fried up eight strips of bacon (four at a time), carefully, letting them drip dry over the pan once I'd finished. For proper bara lawr, you really should be frying in bacon fat. 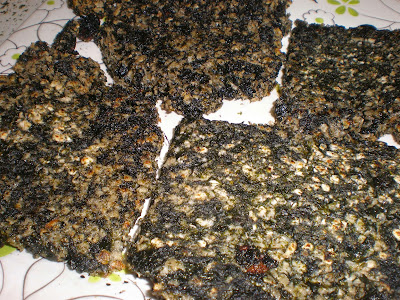 The bacon is certainly not going to waste - I stored it in the freezer, and I'll use it up one strip at a time to add flavour to simple meals. In fact, I had one in my bento just the next day. 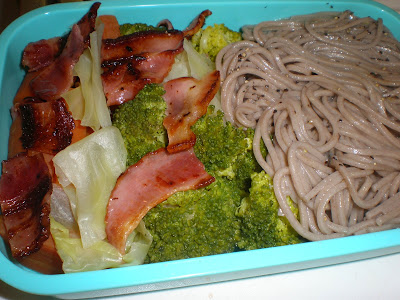 This is a lot healthier than the superficial baconing may suggest.

Fat ready to go, I fried up the cakes, a minute or so on each side. Normally it takes a bit longer, but these cakes were thin, and I suspect the rehydrated nori was a bit dryer than the usual stuff, so I kept it brief. A quick taste-test suggested they were acceptable, if not really tasting the same as the real product.

The finished product I left to cool and dry for a while - don't want any leftover fat making them greasy. I gave it a quick pat with kitchen paper to help deal with that. I then cut it into smaller pieces, and put it into a box layered with silicon paper to take to school, popping it in the fridge overnight just on general principles. It shouldn't be a big health issue to keep it around uncooled, but it's generally a good idea, especially in this hot climate. 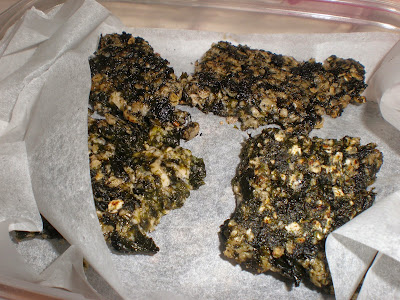 I'm pleased to report that I've had several enthusiastic reviews, including Mayumi-sensei who took some leftover pieces home to have toasted with butter for breakfast! Those people who didn't like it maintaining a tactful silence. That being said, one unfortunate thought I'd generously brought them chocolate cookies and got a nasty shock.

If you can get real tinned lawr, or some kind of boiled nori, it will be more authentic and less hassle. However, dried nori can also work.