Our most recent trips with Culture Class were to the Hakata Folk Museum and Yusentei Gardens. I’ll actually deal with these together, because there’s not a huge amount to say about either one.

The plan for the museum trip was to attend two museums: Hakata Traditional Craft Center and the Hakata Folk Museum. We had a bit of a surprise when we turned up to the first to find that it was shut! Apparently there’d been some late changes to the schedules for class trips, and people had lost track of the fact that this place always shuts on Wednesdays. So we couldn’t go inside, but this did at least mean we had more time for the Folk Museum.

This is a local history and culture museum dedicated to the Hakata district, the core of Fukuoka. 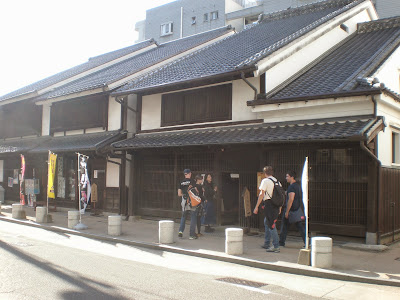 This is an entire old merchant’s house, relocated here and turned into a museum. It’s much larger than what we tend to think of as a house, so presumably a pretty well-to-do merchant! There’s room for essentially a full multi-person workshop.

The museum is fairly specific to Hakata as a district. There’s a chunk of displays about the Yamakasa festival in summer, when various teams – traditionally merchants – build and then race around with large wooden floats, commemorating a time when the city survived a plague sweeping Kyushu. Their escape was attributed to a famous monk being carried around on a palanquin sprinkling holy water, and this gradually morphed into the festival as it stands. We watched a video about the festival and its preparations, which was nicely informative and had English subtitles. There were also little models showing what the festival looks like, although I’ve seen some of the real thing – in fact floats are on display at Kushida Shrine, where I've also been with this class. I thought I'd written that up, but apparently not yet! Apologies for the lack of chronological coherence. 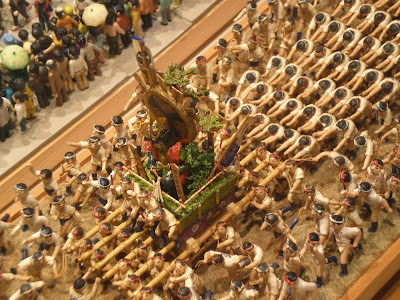 Other sections showed old and recent photographs of the city, to illustrate its development, and some artefacts thought to be particularly typical of Hakata culture. There were a couple of short peek-show films using cutouts that showed something about the history and culture, although I couldn’t follow much. An interesting one was a set of three old telephone sets, where you could listen to lessons in Hakata dialect at beginner, intermediate and advanced level - although as they’re in Japanese already, I didn’t have the time I’d need to puzzle it out! 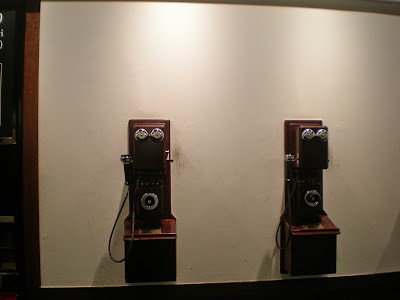 Upstairs were some rooms laid out in traditional artisan style, much like the old houses I’ve now visited. Sometimes there are visiting artisans demonstrating traditional crafts, but not today. Unfortunate! 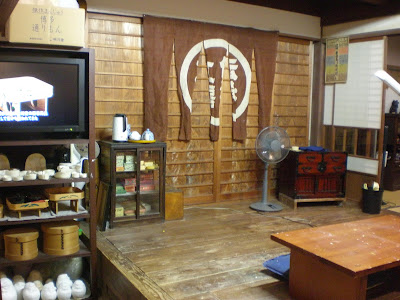 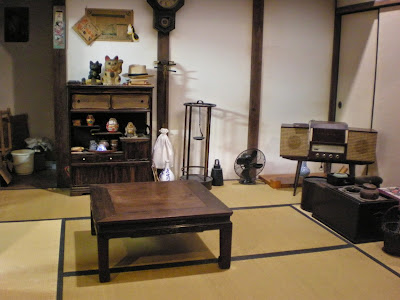 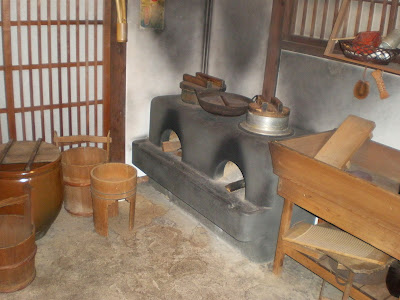 Another part of the museum holds a workshop section, where looms for making obi (the belts used for kimono) were set up. As a part-Lancastrian of weaving roots (we still have shuttles in our house) I have a lingering interest in this kind of thing, but sadly we were very short on time by this point. Apparently it’s normally possible to have a go on the loom, so I expressed an interest, but just at this point a group of Japanese visitors turned up and started chatting to the staff, so by the time our teacher attracted attention there was only time for a quick photo. 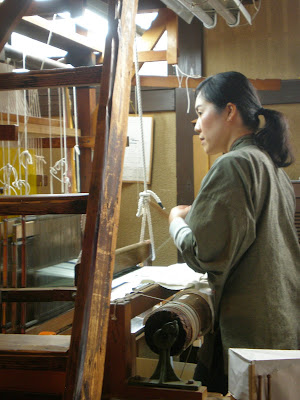 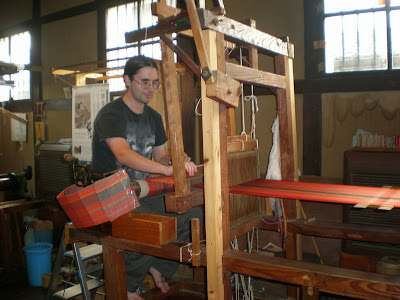 Yusentei used to be a personal resort for the Kuroda Clan, the old lords of Fukuoka and builders of the castle. It's now been restored and opened to the public as a garden. Its name derives from a poem by 久世通夏 (who the English brochure insists on calling "Minamoto Michinatsu", but named elsewhere as "Kuze Michinatsu") describing how friends enjoy each others' company around cooling fountains in the heat of summer. 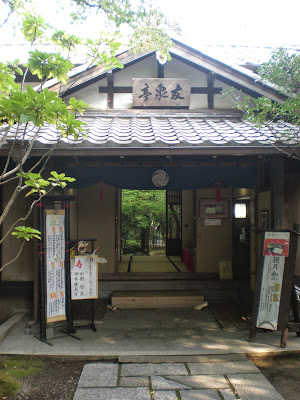 It's a pleasant, fairly quiet place with water and trees and lots of moss, which is a big feature in most Japanese gardens.

For some reason, these stones are turned into dioramas with tiny people. 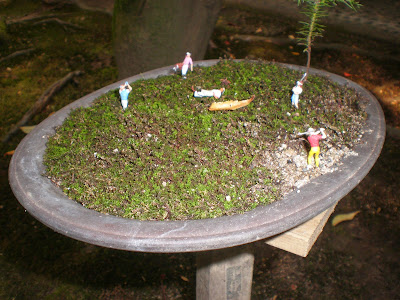 Perhaps the most interesting unusual feature of the park is this traditional stone lantern, which you'll see in just about every older building in town. It was impossible to get a decent photo because of the angles and intervening trees, as it's set some distance from the path behind a fence. However, right at the bottom is a tiny icon dedicated to the Virgin Mary - there were some Catholics in the family at that time. As Christianity was illegal at the time, this allowed them to mark their religion, but it was very simple to cover up the dedication if any problem visitor turned up. 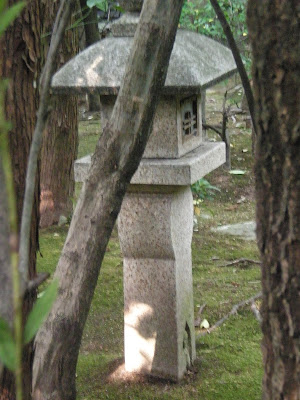 There were loads of koi to feed, and they turned the place into a frothing mob. If you have never seen a rabidly thrashing koi school - and perhaps more importantly, heard the creepy noises they make - it's quite something. I also discovered that their lips are weirdly rubbery, and their bodies slimy.

Mostly, we just chatted a bit and enjoyed the calm. It was the first time really talking to most of these people for me, as we're in different classes. Most were German-speakers, so I mostly spoke German. At the end of the day, two of us discovered that we'd both been assuming the other one was German, and in fact he was a Pole living in Ireland!

The park also contains a teahouse, where we stopped for my first ever proper Japanese macha. This is the strong, powdered tea used in tea ceremonies. Unfortunately, we were told to hurry back, so we didn't really have time to appreciate sitting in this nice formal tearoom and trying out the tea - we were sat there for maybe two minutes tops. 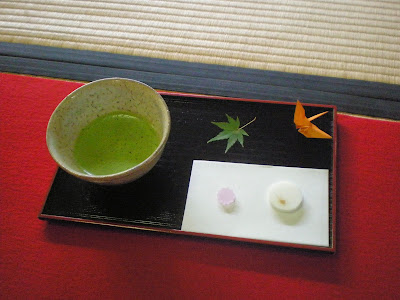 While we were there, some ladies in kimono showed up, and a couple of daring souls asked for their photos. 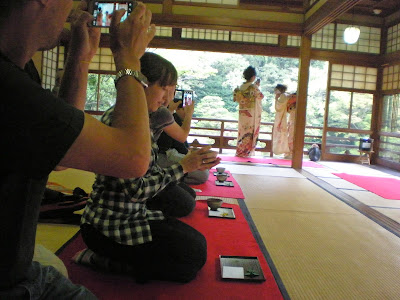 There isn't really anything to see here, it's a garden with a tearoom, if quite a pleasant one.

There was a slightly unfortunate logistical issue with both these trips, in that one member of the class had been scheduled with a lesson at 4pm. This meant that we had to head off around 3.30, and as we only left school around 2.15 and had to take a bus, our time was pretty limited. I can’t imagine how we’d have fitted in two museums in the time, so really I can only be grateful that one was closed. It was a bit unsatisfactory, like.

I would say that these two trips were the least worthwhile of the cultural classes for me. This was actually hinted at by the staff, but I thought I’d give it a go anyway and find out. Basically, they are the sort of places that you can fairly straightforwardly go to yourself.

If you aren’t here for very long, have limited Japanese or aren’t confident, then going with the class makes plenty of sense. The school plans a cultural schedule, so you don’t have to research for yourself where might be interesting, accessible, affordable and comprehensible. The guide arranges transport, buys tickets, does any necessary talking to staff and can help explain things as you go around. These are all very helpful if you’re in town for two weeks and want to do some local Japanese things while you study, plus you go with a group of other people for some nice company.

If you’re more confident and have time to do things yourself, then actually going in a group can be a drawback. As I mentioned, we had to leave early on both these occasions because of one classmate’s schedule, which meant cutting short what we were doing at points I was quite enjoying. Like any group visit, you're likely not to have enough time to (say) try and read through the signs yourself, which means you're losing out on one of the benefits of visiting Japanese attractions - actually using your Japanese.

I’d also say that having a guide is less useful in these cases than with some others we’ve tried – for example, translating during cooking lessons or explaining the layout of the shrine. Museums are generally very text-heavy and full of information that’s hard to absorb unless you have the context. You can go round together and ask the guide to explain everything, in classic tour guide mode, but that tends not to be hugely effective as everyone is interested in different things. There's simply not enough time to individually explain things or answer questions for everyone in the group. Kayoko-san did what she could, this is just a fundamental issue with this sort of thing. Of course, if there had been visiting artisans present, we would have benefited more from having her there to translate.

The garden was at another extreme, because for the most part it’s just a garden with very little that needs explaining, and those details are covered in the various-language leaflets. If you’re part of a group, you tend to end up moving at a speed that doesn’t suit you – if you want to take lots of photos you’ll be dragged along (especially if you’re at the tail end and everyone else has already taken photos!) while others will be held back by people wanting a leisurely stroll. So I would tend to say that in both cases, going with a couple of Japanese friends with similar interests would be a great idea, but that otherwise someone with passable Japanese may be better going on their own, and having time for a leisurely exploration. 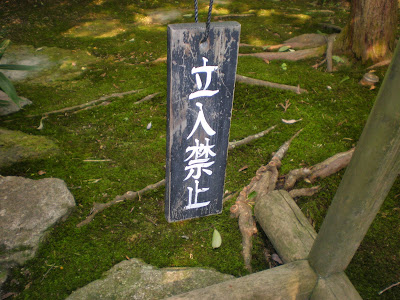 These two lovely, artistic signs tell you "No Entry", but at least they're pretty about it. 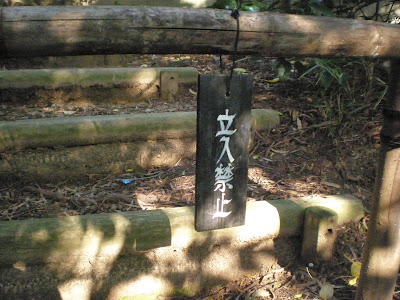 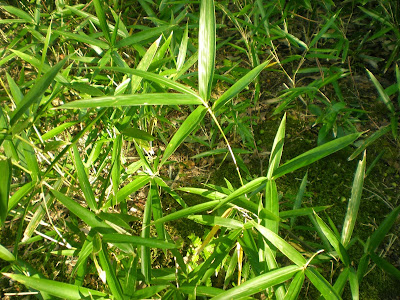 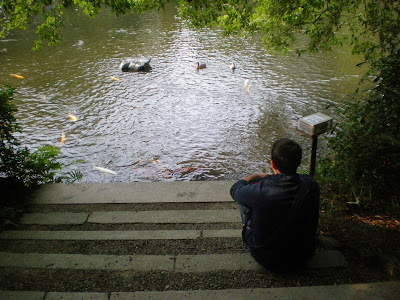 Album covers of the world, unite! 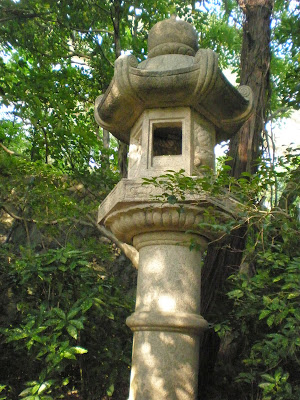 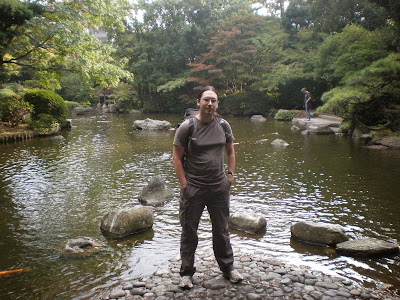 The rare photo actually featuring me.