This is mostly for GenkiJACS students, so feel free to pass along if that isn't you. I should also mention that this will not include any specifics of the exam, since I'm pretty sure they will need to reuse some questions. Not like I could remember them now anyway. In case anyone's confused, I wrote most of this on the day of the exam, but didn't finish it up until a week or so later.

So having finished the Genki II textbook, I'm due to take an exam (in about an hour) before I can move on to the next class. I thought I was done with exams ten years ago. For what it's worth, I'm writing this in a brief revision break, not purely for procrastination.

I was under the impression the exam would be once my lessons resumed next week, as I'm currently on a 3-week half-term break. However, while I was in Korea I had an email asking me to take the exam today. If I'd arranged another trip or something I'd have politely declined, but since I wasn't actually doing anything I didn't see any particular excuse. It also meant, although I'd have to cram my revision in, I'd have a few days post-exam when I wasn't thinking about it. And in the fairly likely event that I don't pass, it gives me more time to prepare for another go...

The exam covers the whole textbook, covers vocabulary, grammar and listening, and has a pass mark of 80%. I haven't actually studied the whole book in class, due to joining an ongoing class on the basement of my placement, which means that although I'd covered the essential bits, there was quite a lot of vocabulary and a certain amount of grammar that I hadn't covered. So I've been trying to catch up on that in my free time during the past couple of months, while staying on top of my classwork and homework. I just about got there.

Unfortunately there's no past paper for the exam. As someone whose revision style is based almost exclusively on doing past papers, this is a pretty substantial drawback.

I now realise that one thing I should have done ages ago is make use of the accompanying CD. Because we'd been using it in class sometimes, and covered the other sections with the teacher, I didn't particularly see the point. So I only started using it yesterday, and realised I'd been missing a trick.

The advantage here is that the CD is both a resource for listening (which you really can't get too much practice for, especially for the odder verb forms that get less use in conversation) and a way to drill things. So I started working through the textbook exercises based on the CD. I just wish I'd had longer to do this. I heartily recommend any future students to do exactly this. On a weekend or something, just pick a chapter and go through it. It's great revision and pretty quick when you're not doing anything else. Doing it in small doses over time will be way more effective than trying to cram it in like I am.

Right, back to revision.

Okay, I just finished. Maybe. We'll get back to that in a minute...

The exam was, on the whole, okay, although I'm not hugely confident.

My exam (they presumably differ) came in more that one paper. As nobody else was taking it at the time, I was set in a room to get on with it. GenkiJACS clearly trusted me not to do something as self-sabotaging as cheating on a progression test, so I just dumped my bag in the room and started - none of the regulatory stuff you have to worry about in school most exams, no teacher sat impatiently waiting for me to finish à la GCSEs. This was an unexpected and very welcome feature. I began with a grammar paper, which covered everything from verb inflections to particle use, including some contextual use. Opening the paper, I look at a table of verb forms and promptly transformed into a shaking, sweating mass of nerves.

This was pretty unexpected, because historically I haven't really been that worried about exams that didn't involve oral tests (those are always deeply traumatic). However, in the last few years I've had some stress/anxiety issues, and they decided to manifest here. This may be partly because I didn't get as much preparation done as I'd have liked, as I mentioned, so I wasn't feeling entirely ready for it. The immediate reason was that this was actually one of the trickiest parts of the whole test for me. You know where I mentioned earlier that I'd missed some of the textbook by joining an ongoing class? Well, that included a couple of verb forms in their entirety - the potential (can do) and volitional (let's do) forms.

I did say I wouldn't mention specifics, but I feel like "you need to know all the inflections of common verbs" is obvious enough that it doesn't really undermine the test in any way.

Naturally I'd looked over these forms in my revision, and we did use them a very small amount in class. However, they aren't used that often in a classroom context. When they are used, we tend to be use the -masu polite form of the verb, whereas the test covered the plain forms used between friends. I use the volitional occasionally in conversation with friends, but of course in that context it's much easier to get away with mistakes, particularly small ones like slight mistakes in vowel use. The test was written, of course, and so accuracy was crucial. My revision had been hasty, with a lot of vocabulary to focus on, and I was filled with agonising doubt about the details of these forms.

I spent around fifteen minutes of the fifty available filling in the first question on the test, and then moved on. Most of the rest seemed okay, with a few uncertain points. I left a couple of blanks, because in a test like this I saw no point in guessing when I didn't have a preferred answer. If my Japanese wasn't strong enough and I needed to redo some material, then I'd be better off failing than passing by chance. What with my worries about the first question and having wasted a lot of time, I was fairly stressed throughout this paper, which naturally slowed me down further, so I just scraped a finish before the time was up. Quite worried about this paper, I had no time to review answers or anything. As a person who normally spends the last third of all exams rereading the paper twice and then doodling in the margins, this is a pretty big deal.

Thankfully, the rest of the paper was nothing like as anxiety-inducing as the first part, and between that and a brief break while I got a fresh cuppa (yes, I could drink and eat during the exam! marvellous!) and the next paper, and my brief conversation with the lovely Nabe-sensei, I'd calmed down a fair bit.

The second paper was vocabulary. This included kanji recognition, marking pronunciation, and knowledge of how to use words in a sentence. It was tricky in places, not least because some kanji are annoyingly similar to others. This is a particular problem for me because I know a ton of kanji that haven't yet appeared in the books, including loads that I only know in Chinese and may have a wildly different meaning or pronunciation in Japanese. While it's usually a big advantage for me, in some types of questions this can trip you up. On the whole though, I found this paper fairly straightforward, although again there were a few spots I wasn't that sure of. Not entirely sure how well I did, as I was a bit doubtful of some points (especially pronunciation) but probably better than the grammar.

When I finished paper two, I came out and there was some brief confusion. It wasn't quite clear whether I needed to do a third paper, and as it was getting late, nobody left in the office knew the answer. There was a paper lying around, but it wasn't clear whether it was intended for me - from a quick look at it I rather thought not. So I agreed to come in the next morning and check.

So I went into the school again and discovered I had in fact finished the exam. In fact, Nabe-sensei had already marked it and congratulated me on passing! I was so happy. Exact marks and transcript aren't ready yet but knowing I can progress (and don't have to resit!) is good enough for me right now. This afternoon is my conversation date, so I can also enjoy that without having exam worries in the back of my mind.

So I came into school for no particular reason. It's technically still holiday for me, but I had nothing particular to do and I get bored sitting around my apartment or just walking on my own. I've done plenty of that. So just like on my free afternoons, I decided to spend a few hours in the lounge reading and studying. Being at school generally makes it easier to motivate myself to work, plus I like having people around even if I'm not chatting to them.

Anyway, Nabe-sensei tracked me down and provided me with my transcript. The boy done good! 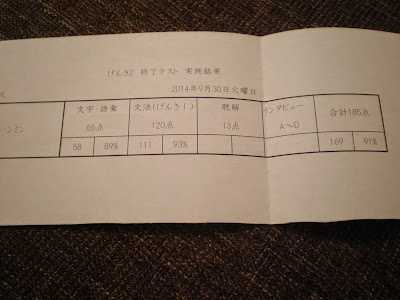 Okay, this will be a bit bewildering to the non-Japanese-readers amongst you. The broken part on the far left is just my name. From left to right, we go Vocabulary, Grammar, Listening Comprehension, Interview, Total. Each lists a number of marks (点) available. Each section has two boxes, for mark and percentage respectively. The Listening and Interview sections are blank because they're for higher-level students, I think. As you can see, I actually did better on the gramamr than on the vocabulary! I'm not quite sure how that happened, but then it was a much bigger paper.

I appreciate reading the picture may be difficult. The crucial point to note is that with a pass mark of 80%, I scored a respectable 91% overall (89% vocabulary, 93% grammar). I'm fairly happy with that.

I was allowed to see my papers and check the mistakes I made, but not to keep them. Seems fair enough, presumably it will help avoid answers getting passed around - with the best will in the world, for many people it would be hard to say no if someone asked for a look at your paper, and people won't necessarily realise that answers may be the same.

Unfortunately I didn't think to actually write down the points I need to review. I might ask in the office if they can let me have another look so I can do that.