So on Friday, we said goodbye to a couple of classmates. This happens fairly regularly as most people aren't in a position to stay six months. We'd got on very well, and hung out during lunchtimes and so on, so there was a plan to get together for a goodbye meal. As it turned out, only three of us could make it, but we did our best. My friends will henceforth be known as AH and MA.

We started out with a trip to an okonomiyaki place that AH recommended. These are a kind of pancake, omelette sort of thing made with batter and a variety of fillings, chiefly cabbage and meat, and slathered in sauce. Now I'd had okonomiyaki once before, from the convenience shop where I normally buy my lunch and wanted a change - it was, I am fairly happy to say, revolting. Nevertheless, the enthusiasm of my friends was enough to convince me to give the restaurant a go. Prepackaged convenience store meals are really not a good indicator of what food is supposed to be like.

On AH's advice, we ordered one dish of yakisoba (stir-fried noodles and vegetables) and two different okonomiyaki. We'd managed to get seats at the grill, and this really improved the experience. The way to make both dishes is, you have a metal table that you raise to enormous temperatures, and then you use it like a huge wok. The chefs masterfully tossed and spun the dishes in front of us, grilling them beautifully without burning, then scraping any remnants off the searing surface before starting the next batch. Hygiene isn't a big concern during the shift because the whole thing is so hot - although it would undoubtedly be an issue for allergy sufferers. 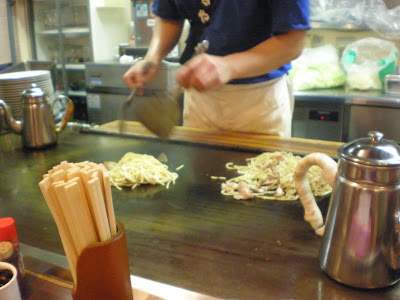 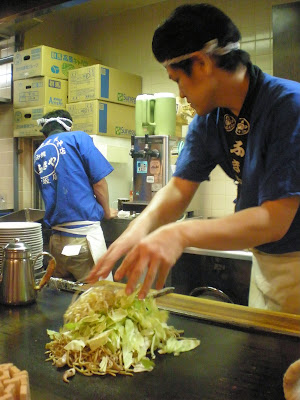 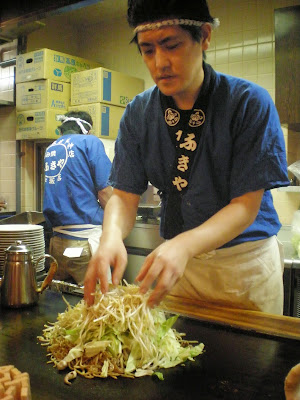 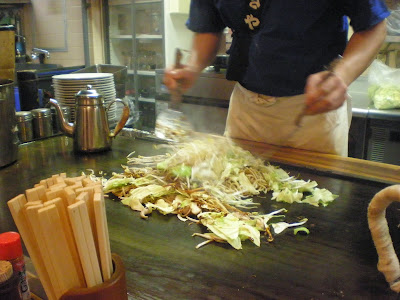 These photos were taken with the special sports mode for capturing rapid movements. This should tell you a lot about what is happening here.

We began with our yakisoba, a first for me, and dished it out between us. It was crunchy, flavoursome and a nice opener for the heavier food to follow - we only had a few mouthfuls each, I hasten to add. 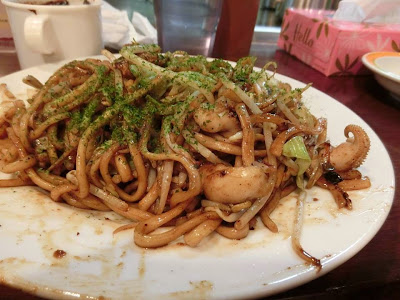 The okonomiyaki was next, intimidatingly large and glistening. The chef did a sudden woodpecker impression, carving it into neat squares with a series of rapid-fire blows from the sharp end of his spatulas. 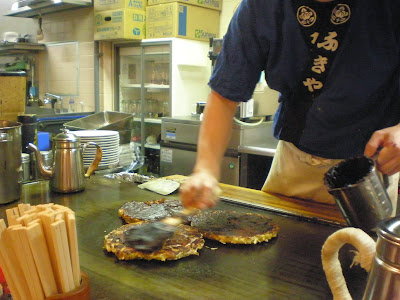 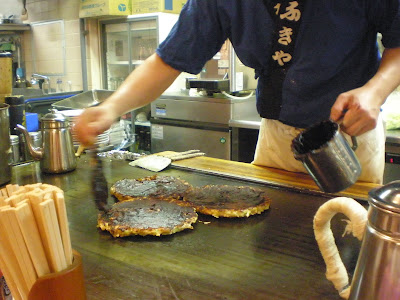 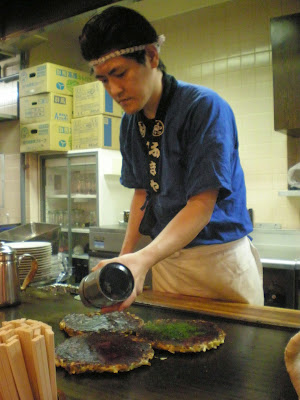 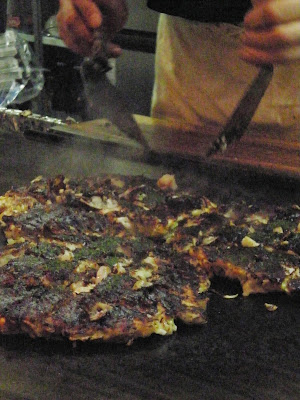 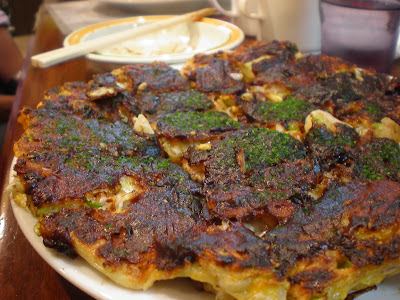 I was a bit nervous of this because of my prior experience, but it smelled all right and came highly recommended by both friends, as well as a previous boss (hi, Gilly!). So I dug in, and sure enough it was delicious. It's lighter than the average omelette, with an interesting texture and the rich kick of the sauce.

After a few bites, I discovered that one of our okonomiyaki came with prawns. Now, I've never eaten a prawn. Our family has allergy issues with seafood, and although we have plenty of evidence that I'm not affected, I'd been brought up without touching the stuff. If you have never eaten fish by the age of 15, let alone seafood, let me tell you that eating prawns seems incredibly weird. It's an insect. Okay, the biologist in me objects to that classification - but on a fundamental, common-sense level, a prawn is basically an insect. In the UK, insects are very much a Thing You Do Not Eat.

That being said, I've slowly been working my way through the many things I grew up not eating, and have for some time (especially since I came to seafood-loving Japan) been seriously considering prawns. So I thought, what the hey?

The prawn was... okay? It wasn't nearly as crunchy as I'd expected. Sort of vaguely meaty and vaguely indescribable. I ended up eating another couple in the course of our meal, although the sheer size of the food defeated us in the end, to AH's dismay. We paid up and left - the whole thing was about £5 apiece, which seemed certainly fair enough to me. 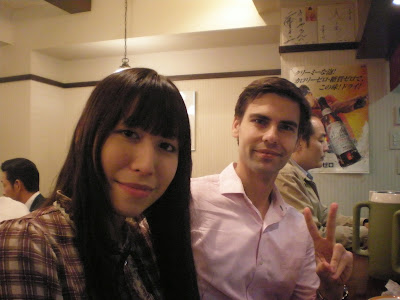 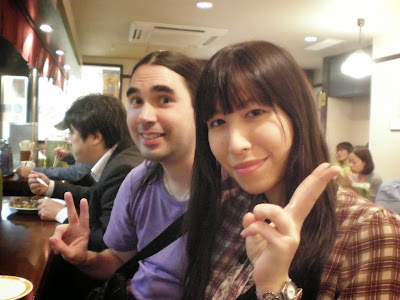 Full to the brim, this seemed like a good time for a wander. Fukuoka is a very calm, safe place to be out even on a Friday night, so we wandered to one of the rivers (such as they are) and enjoyed the peace and fresh air. There was a cool breeze and really not many people around, considering how full of eateries and bars the area was. Perhaps still too early for Japan, where it seems people routinely finish work around 8pm. 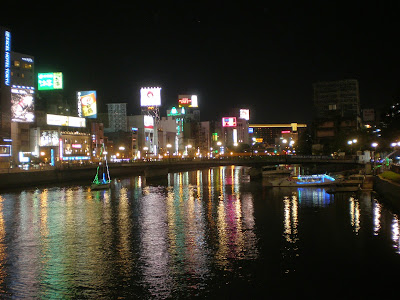 There was a man with a banjo busking away. I'd have liked to stay and listen for a bit, but the others weren't that interested so we moved on. I feel bad for taking his photo without giving him a donation. 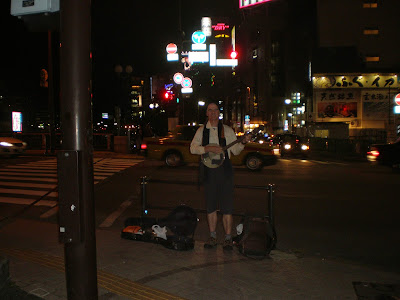 AH then remembered that he'd been told of an interesting specialist beer place in the area, which he'd not managed to find on his last foray. Having nothing else in mind, we kept an eye out for it, and MA spotted it way across the river. Surprisingly, when we circled back on the far bank, we still managed to find it! This district was increasingly full of 'love hotels', which caused us both amusement and mild scepticism over what the bar would be like, but it was perfectly respectable. In truth, I'm not entirely sure of the place of love hotels in Japanese culture - I suspect they're more respectable than they seem to British eyes, in a country where it's so hard for many people to find privacy or time together. The names and attempts at subtlety provided us much amusement.

And that's the last I expect to write on the subject - already more than I'd have ever guessed.

We headed for the balcony, and spent a soothing hour or so sipping our half-pints of interesting beer and watching the world go by, or at least the small and select part of it that travels by boat on a Friday night. 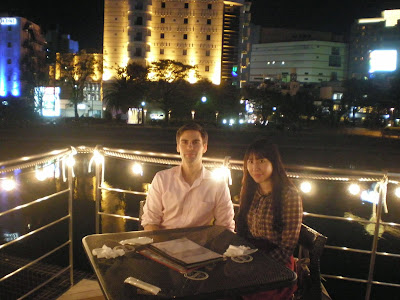 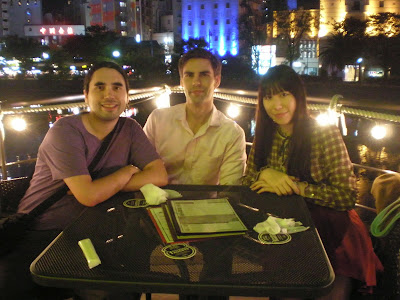 Afterwards, we wandered back into town, where we said our melancholy goodbyes and went our separate ways. It was a really nice evening, despite having been pretty tired when I started out. Lovely food and lovely company, and a fun little look around a corner of the city I normally ignore. Thanks all!