I've actually had very little free time this visit. My class schedule is up from 4 hours last time to 6 per day this time, which with the lunch break has meant 9.30-4pm every day, essentially. Because it's only three weeks in Fukuoka, I've also been socialising pretty frantically, so a lot of days I've been meeting friends for another 4 hours or so. The handful remaining I've done a lot of shopping, cooking and so on.

Anyway, I did end up with a chunk of time one day after school, and decided to wander down south of Hakata. I didn't really visit this district when I was here last time. I'm not sure it's especially interesting, but my time wasn't long enough that it was worth researching and then taking a trip out somewhere more distant - especially when it's getting dark at about 6pm.

From the station I headed south to Minoshima (美野島), which is an area I'd vaguely heard about. It's got various little shops and stalls - not touristy ones like in Hita, but perfectly ordinary shops for actual residents. Nothing too special, but a nice change from conbinis and twenty-storey company headquarters. 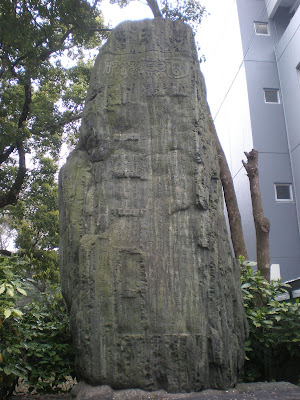 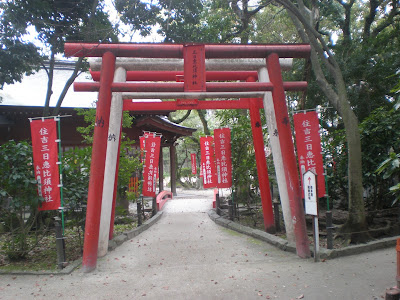 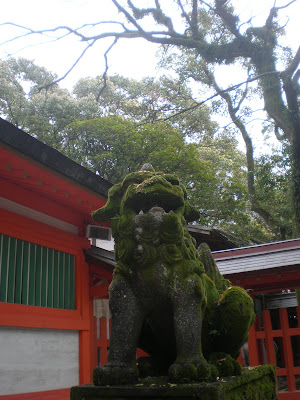 I thought I'd grab some general pictures to illustrate what it's like around Hakata. 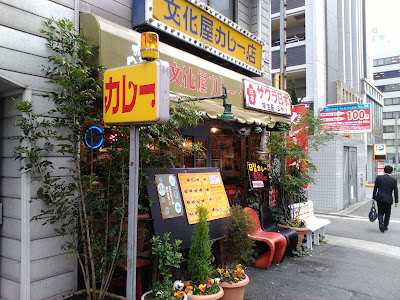 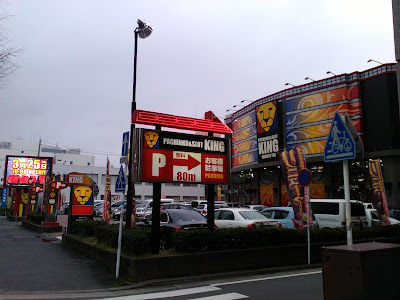 This is a pachinko parlour - a gambling centre, basically. This is huge business in Japan. I'm somewhat baffled by its apparent ubiquity - I know gambling is big in the UK too, but it seems less physically prominent. This might just be about the way the business works, though. You see huge pachinko parlours all over the place, whereas I hardly ever see gambling centres in the UK - maybe it's spread more thinly (between pubs etc?).

Apparently pachinko is one of the few legalised forms of gambling here, via a convenient legal fiction and a system of indirectly paying cash rewards. Like all gambling (except tombolas, perhaps) it continues to puzzle me. 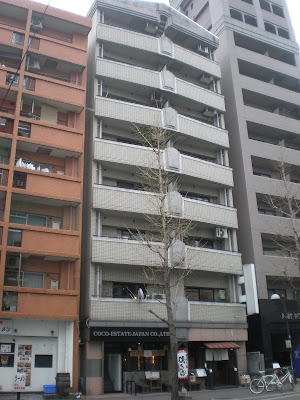 A completely archetypal view in Fukuoka. It's hard to express the disconcerting novelty of being surrounded by very tall buildings at almost all times. Also, concrete. 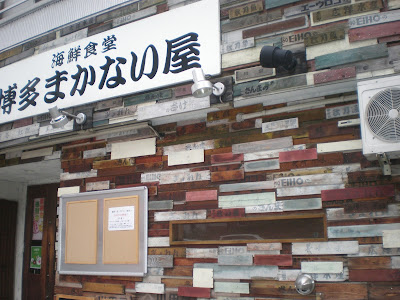 This is pretty cool. I thought for a while it might be a signmakers' premises, or even a calligraphy centre, but on closer inspection it turns out to sell seafood. 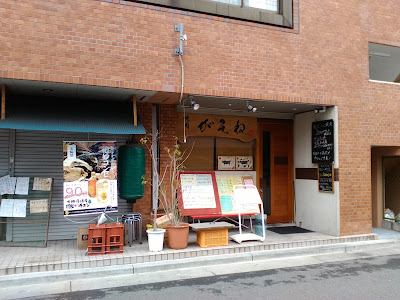 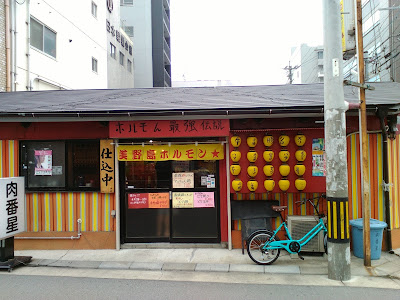 After a surprising amount of rather dreary walking through very similar city-centre streets, I found myself in Minoshima (thanks, GPS). It's... okay, in all honesty, this is the kind of street I would make no particular effort to pass through under normal circumstances, yet alone walk for half an hour each way just to walk down. But I'm in another country, and specifically in a very tower-blocky big of a big city in another country, so it was positively a relief. It's just some little ordinary shops and things.

Following positive reception of my last post, here's the Google Street View entry for the main road of Minoshima. 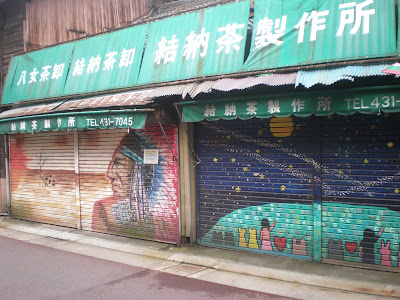 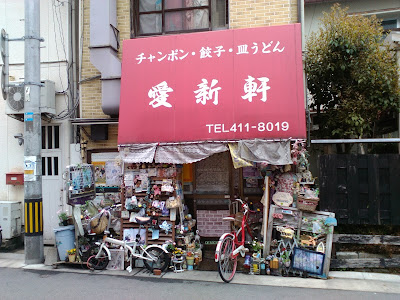 This is apparently a restaurant, but there's a huge amount of random stuff just hanging outside it. 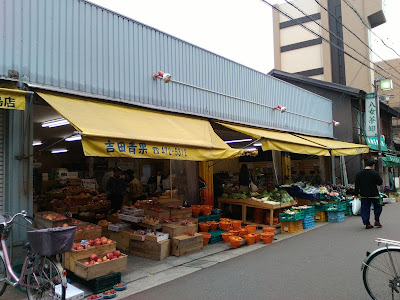 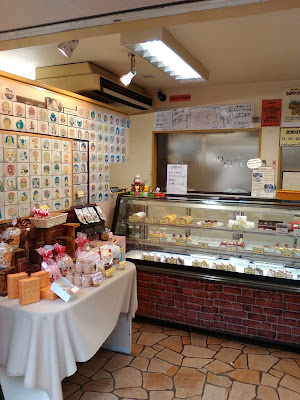 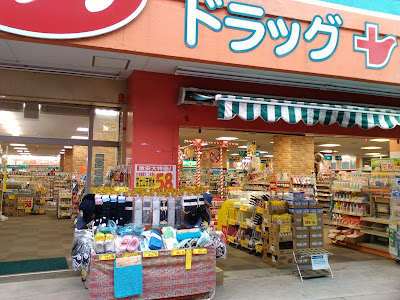 Another thing that makes Japan feel slightly odd sometimes is the way things are outside a lot of the time. This photo shows one example: as best I can tell, there's no reason to worry about rain most of the time, so using the street for extra display space makes a lot of sense. In the UK you rarely see this except a few charity shops and second-hand stores that put low-value items outside, often covered with plastic. A second point is that lots of things are just outside in general: outside vending machines are everywhere, and shops leave all kinds of stuff (signs, furnishings, etc.) stored accessibly outside after dark. In the UK it would probably be stolen, vandalised or set on fire within days. The idea of not having to think that way is slightly weird. 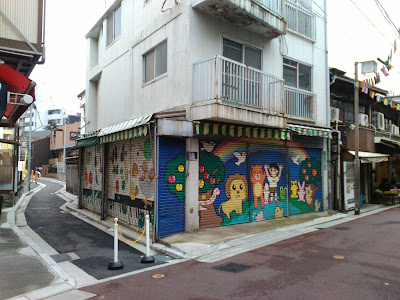 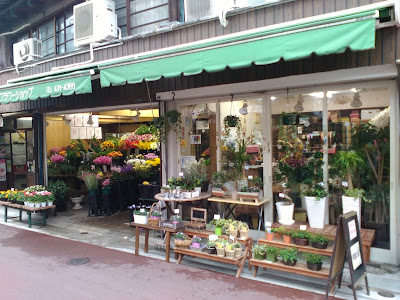 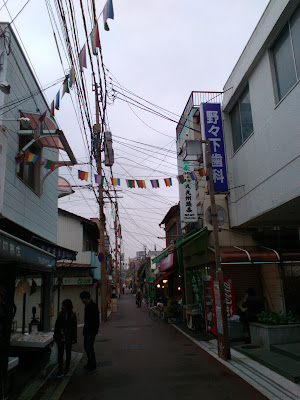 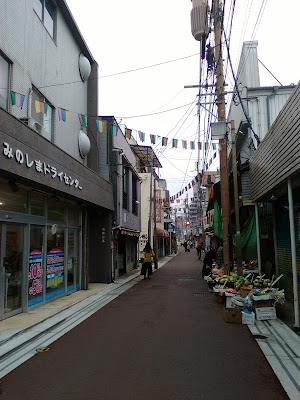 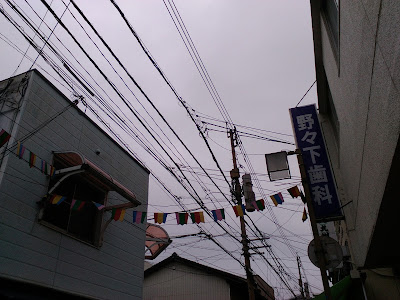 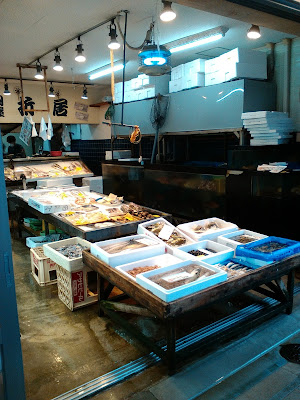 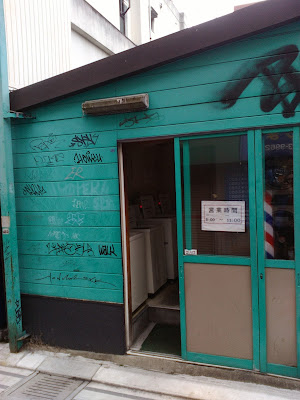 This is, I think, the first graffiti I've actually seen in Japan - and I'm not entirely sure it's even graffiti. 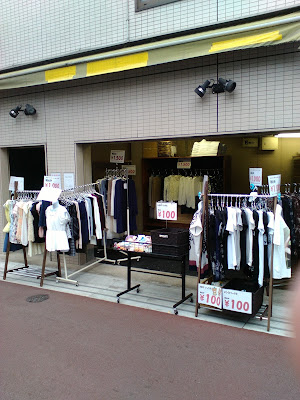 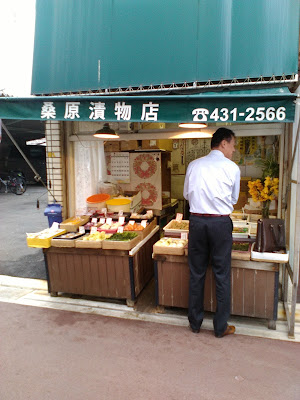 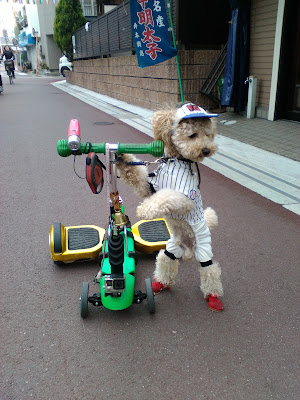 Look, I don't know what's going on with this dog. I don't know why it's dressed as a baseball player. I don't know why it is pushing a scooter along the street. The human accompanying it noticed my interest and heartily encouraged me to photograph it. I feel like I should just be raising awareness of this dog in general. 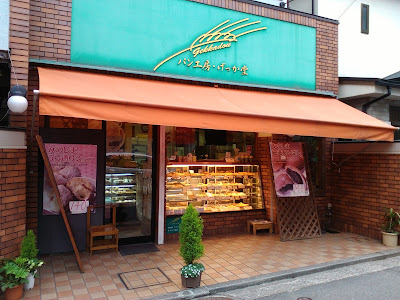 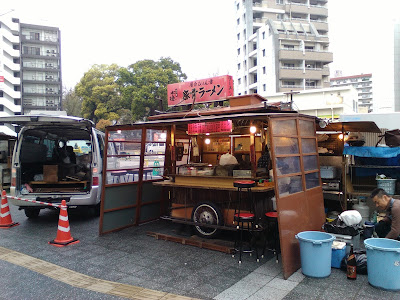 As it was getting dark, I wandered back home to cook some vegetables. This is one of the few ways you seem to be able to consume vegetables here. In my limited experience, restaurants all over the world are keen to give you big chunks of meat and carbohydrate, so no surprise. However, I'm slightly surprised to find that I struggle to find vegetables to eat in Japan (which has a reputation for healthiness) far more than in the UK.

Typically a meal bought in the UK comes with either cooked veg or salad as standard, and of course fruit is readily available. In restaurants I've tried here, quite a lot of meals seem to include no veg whatsoever - for example, you'll get rice with meat in curry sauce, or some pieces of beef in a bowl of rice. A much larger proportion have a sprinkling of leek, or perhaps a teaspoonful of pickled vegetables, or a tiny heap of seaweed. I'm just not quite sure what I'm doing wrong here. You can get meals with vegetables in, but I'm having to work much harder than I'm used to to ensure that, and the quantities are still mostly small. Either I'm going to the wrong restaurants, or - quite plausibly - I don't recognise the things that are vegetables on the photos and exquisite models of food. In fairness to myself, it's often quite difficult to distinguish prepared vegetables and prepared seafood here. 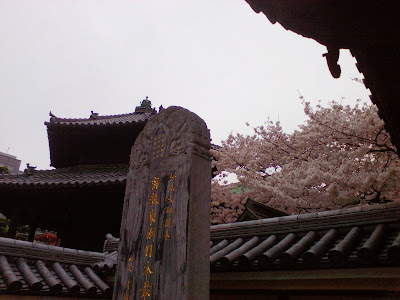 The twilight over Kushida Shrine (櫛田神社)