Genki Japanese vs. Minna no Nihongo

As I've made the switch from Minna no Nihongo to Genki Japanese at GenkiJACS, I'm in a position to somewhat compare the two, at least from a student's perspective. 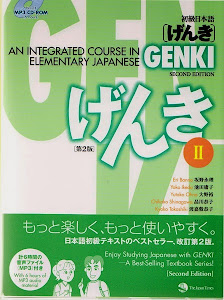 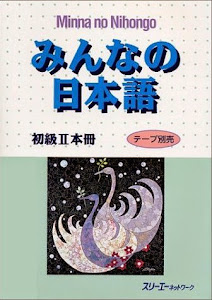 Genki Japanese uses English, Minna no Nihongo is Japanese-only and you must buy a separate English book if you want that support. For me personally, I soon found the Japanese textbook fine as it's usually pretty clear what's going on. However, you really can't work through it independently - a teacher (or the teacher's book plus English guide) is essential. I had an excellent teacher, so that wasn't a problem.

More on this later.

I have to say that despite the language, I found the exercises in Minna + teacher much easier to process than Genki + teacher, particularly when it comes to homework.

Genki often gives exercises without making clear what they want to achieve. To take a genuine example, there might be a string of sentences with the instruction "Answer the following questions". Well, I can usually just write "Hai" and "Iie" to all of them, but that's clearly pointless. I can write out the same sentence without the question grammar, if the point is to practice writing those words. We worked on transitive and intransitive verb pairs, so maybe the point is to practice those - but are we just practicing using the same form as in the question? Or are we supposed to transform them to the matching intransitive form, which the teacher very briefly mentioned in passing in class but I'm not sure whether that's a general rule or one instance? In short, there are many ways to do this exercise, but it's not remotely clear which one is intended or useful. These exercises are okay as classwork if the teacher realises they need an explanation; if not, there's the awkwardness of asking for an explanation, and as homework they are a bit of a pain.

Minna has a clear and reliable structure for exercises. There is an example at the top, showing how a word is inserted, or a conjugation applied, or a sentence transformed from past to hypothetical. In general, it is good at indicating to you what it is you're supposed to be practicing in a given exercise. There are still, of course, some cases where I don't immediately get it; but I've found this to be the case more often with Genki.

There are a large proportion of "write your own sentence" exercises in Genki. Some are literally asking for an entire sentence, others want you to provide a suitable start or finish to a part-written sentence.

I'm torn about these, because they have good and bad points. It's a really good idea - vital, in fact - to spend some time writing entire sentences, rather than just learning to slot a word in according to a structure that you just learned. The former will prepare you for speaking a language, the latter for solving word-slotting puzzles. However, I feel it's important o add the disclaimer that often, sentence-writing exercises are pushmi-pullyus. They can offer the bored student a chance to get creative, but they can also be a frustrating waste of time, with the time spent actually practicing the grammar coming a poor second to the time spent meeting all the other requirements of the question.

Both books often use picture-based exercises, where you assign or create sentences based on what's going on in a picture. On the whole I would tend to say the pictures in Genki are easier to interpret, and therefore it's easier to get on with the language bit. In Minna I did have fairly regular confusion over what was occurring in some picture or other, so coming up with the Japanese was tricky.

I haven't actually asked anyone for the reasoning behind the choice of Genki (it would seem cheeky), and I've no reason to think anyone actually sat down specifically to decide between Genki and Minna, but I think a key point from the school's perspective is the English text. It sounds counterintuitive given the point is to learn Japanese, but Genki provides a single book with English instruction. This is efficient and simple: the student only needs to bring one book along with them, and the school only needs to order one book per student, rather than two or more. English is essentially the second language of the school, used by most students for raising issues they can't handle in Japanese.

Technically, Minna offers more flexibility because each student can have the accompanying volume in their own preferred language; in practice, though, this would present problems in an international school. As an administrative point, the school would have to buy the general Japanese Minna volumes (gauging how many of each volume to buy), and also order the correct number of each accompanying volume to match the incoming students and their levels. Guessing this in advance would be a very tricky business. Students aren't placed until they arrive and complete a placement test, so this would likely cause a delay in providing books, especially for the less common languages. Even if they did decide to order in bulk and stash hundreds of books in multiple languages somewhere (and I can't imagine storage space in central Fukuoka is cheap), the school would lose out on economies of scale and bulk discounts, which would make things more expensive for the students.

A second consideration is that the English text is probably the fairest option that can realistically be provided. It does absolutely privilege English-speakers, but this isn't an arbitrary decision; it's a result of how dominant English is internationally. Because of this dominance, all the teachers speak very good English, and the vast majority of students who come to the school also speak very good English - not least because it would be hard to make all the arrangements with the school otherwise. Things are done in Japanese as far as possible, but as a fallback option, there is English (another advantage here is that not only the student asking a question, but also the rest of the class, can probably understand a response in English). Several teachers and staff do speak other languages as well, but those are a useful bonus rather than something a student can assume.

If Minna was used with the companion books in a student's native language, then students might well find some of the material easier to follow. However, the teachers can't all be expected to fluently speak several dozen languages, so they would not generally be able to follow up by dealing with questions in those native languages; in particular, they would struggle to answer questions based on what is written in a particular translation of the textbook. Students would have to get used to three sets of terminology, as they switch between the Japanese explanations, those in their native language, and the English versions. This additional complication would likely make things more difficult than simply working in Japanese and English all the time.

This would also create a substantial gap between students, depending on whether their native language was supported by the textbook. Minna is available in ten major languages of Europe and Asia, and these do cover most of the students I've met, but there are also students from other countries who don't necessarily speak any of those fluently. There are no Scandinavian or Eastern European languages, no African languages, no Hindi, Urdu or Punjabi, no Arabic, and of course no lesser-spoken languages. In a multilingual classroom, most students would have the advantage of instruction materials in their native language (and, in a hypothetical world, polyglot teachers), while a few would have to use the fallback of English. It seems like this would create a divide between the students. Using English does still privilege native speakers, but the pool is much smaller that way, and the pool of second-language speakers is much bigger, so the playing field is probably flatter. Because so many people are obliged to learn English to a very high level, and use it frequently, it's likely the smallest privilege gap you can practically produce.

The second major advantage of Genki is indeed that it's self-contained, so you don't need a companion book nor a teacher to explain it (at least in theory!). New topics, vocabulary and concepts are introduced and explained in English, with examples of usage and tricky points to watch. If you're having trouble with a concept, you can review it yourself and see what might be causing trouble. If, like me, you end up joining a class partway through a textbook due to the placement test, there is bound to be some vocabulary you missed, or some grammar you don't know because your last textbook used a different order: with Genki (or any English book) you can check through the earlier sections in your own time to catch up on such things. It's also just plain easier for most Roman-script-natives to flick through and rapidly spot the bit you wanted, compared to trying to skim-read a book that's entirely in Japanese.

On the whole, I would tend to stick with the arrangement I actually had. Use Minna no Nihongo for small-group or individual tuition where everyone speaks the same language, because the focus on Japanese and the clarity of the exercises makes this efficient and demanding. The difficulty of self-study is less of a problem for individuals, as the lessons should already be going at the pace that suits them, and it’s easier for such students to ensure they have an appropriate companion book if they need it.

For mixed groups, Genki Japanese probably is the best choice, because it’s linguistically accessible and makes it easier for a learner to do whatever additional work is needed to match the pace of the class. Although it sounds frivolous, having only one textbook is also a surprisingly big advantage; it just makes things less complicated, so the chances of you forgetting or mislaying one of your books are cut substantially. A bonus is that people can share the textbook if necessary, which wouldn’t work so well if everyone owned one in their own native language.

Email ThisBlogThis!Share to TwitterShare to FacebookShare to Pinterest
Labels: study