The GenkiJACS school at Hakata

One of the major changes (or sets of changes, I suppose) since my first visit is the move of the GenkiJACS school.

Location, location, you know the other one

Previously, the school was very near Tenjin, the city's main shopping district, with a fair number of offices and homes as well (because Japan seems to do much better than the UK at mixed town planning). This is an extremely lively place: within easy reach are just about every kind of shop the average person needs for personal purchases*; all the restaurants and cafes and bars you'd expect to service a hugely popular area where hordes of people work and shop until about 9pm in a culture where after-work eating and drinking with colleagues is a big deal; and assorted other stuff that has to be somewhere.

All this makes it generally an interesting, if sometimes exhausting, place to be. You could nip out from school and easily get food in several dozen nearby cheap restaurants, as well as picking up goods ranging from cutlery to stationery to clothes to electronics to obscure second-hand manga. Apparently it's also a good place to go on a night out (I didn't really). There's also a very large park nearby, several smaller ones, museums, art galleries, karaoke places, and so on. A useful point are the large underground shopping mall and several large overground malls, which provide relatively quiet pedestrianised areas where you can wander or stand around more freely, without immediate danger from traffic.

At that time, I was (unlike most students, I think) living in a completely different quarter of town. Befu is a sedate residential district, mostly notable for its improbable concentration of dental and medical clinics. It still has a fair number of small restaurants, but its shops are much fewer and mostly aimed at everyday needs: foodstuffs, pharmacy goods, and dry cleaning, mostly. As I was going to Tenjin every day, this wasn't really a problem.

Hakata is very different. It's the central business district of the city, which means it's busy too, but in a very different way. The focal point of the busyness is Hakata station, which is at most times a place you need to almost fight your way across, and where you cannot stop for a single minute without being in someone's way. The streets nearby are crammed with businesses, and the shops are much more limited: the ones nearest the school are convenience stores, while the station has a relatively expensive selection of everyday goods and clothes, but is mostly devoted to fashion and souvenirs. There doesn't seem to be much in the way of entertainment.

The station is the only pedestrianised area, and its shops are so tightly packed that there's really nowhere you can stand without being in the way. The streets are relatively narrow, with lots of crossings and waits of several minutes at most of them. At key times (like on the way to school, or lunchtime) they're packed with besuited people heading intently to work. There's a very small parklet nearby which, while it does provide enough space for a few dozen people to sit down, contains less grass than the average university lecture theatre.**

**This is a drugs reference.

Nakahie Park, which is mostly a sports pitch with a little bit of seating

On the whole, I think this makes the Hakata area mostly less interesting to be around. There's less scope for wandering round nosing at shops, because most of them are concentrated in a small area (the station) and there are just far fewer of them. You can head off in various directions, but other than Canal City (a big mall area) most of them are a bit nondescript for quite some distance, and Canal City seems to be a fairly limited subset of high street shops. Tenjin was made interesting because the range of stuff seemed very broad and sometimes unexpected; it had room for niche stuff.

It's not a bad location at all, and it's got all the essentials, while students here for a short time will probably find enough to do just exploring the Hakata area.

So how about that school? 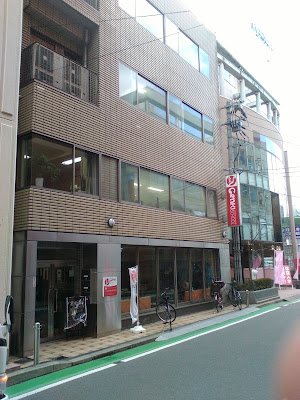 On the whole, and in most of the specifics, it feels like a substantial improvement on what was already a pretty good environment.

Most notably, the classrooms are now massively more spacious, which really is a huge help. You can get into a seat without asking every single other person to stand up and breathe in because they're pressed against the walls, as was previously the case. You can pick things up off the floor without doing some kind of contortionist act. You can shift around, lean back, stretch out, and generally be of average height without suffering physical pain. 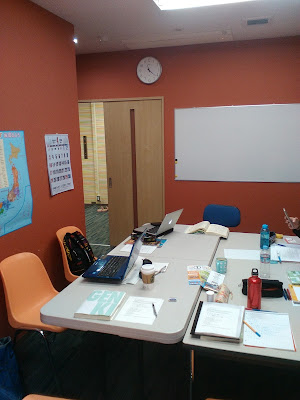 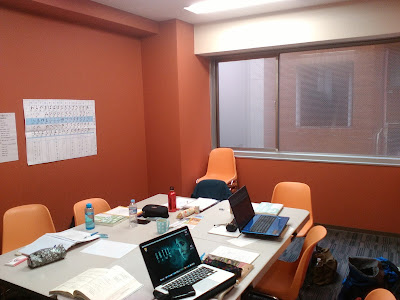 This also helps with the classroom environment. As well as just making everyone more comfortable, there's a lot more desk space, so you can spread stuff out more easily. Even better, the teachers can move around the classroom, talking more easily to different people, forming different pairs for conversation practice, and so on.

The building is no longer shared with several other businesses. That wasn't a particular problem, but it does mean it feels more private, which is probably a nice touch. Particularly for the younger students I can see that being reassuring. It also means there aren't random office workers smoking in the shared toilets in defiance of the signs (I confess, at this juncture, to occasionally banging on the doors and telling them to stop, because that is disgusting, people).

The building was previously on a level; it's now split over five floors. It's not a particular problem for me, being a fit person who likes exercise, although I have to say that unless I've managed to find a uniquely well-fitting pair of slippers that day, walking up to the fourth floor carrying a cup of green (milkless, and therefore boiling) tea remains a tense experience. It's also slightly regrettable that as best I can tell, the only place to refill drinks is the ground floor.

I should highlight that there is a lift, but it's reserved for staff use only. I imagine (but cannot guarantee) that students with mobility issues would be allowed to use it. If anyone's reading this and does have mobility issues but is thinking of going to the school... I think the journey from Hakata Station (which would be your arrival point from any of the underground stations, and most buses) would be fairly simple, with slopes on all the curbs and plenty of crossings. There's a couple of crossings with no lights and relatively poor visibility at times, where you'd be relying on polite drivers giving way.

In terms of facilities, the lounge has probably got smaller since the move, although I think there are now more students (there's certainly scope for more). This time of year (spring) is relatively quiet, but I imagine this is a bigger problem come summer. In particular, access to the hot water and microwave may be an issue, as will carrying hot drinks safely from the far end of the lounge to the stairs, and then up the stairs. If I'm right in thinking there's only two hot water dispensers and one microwave, this is probably also going to create a substantial bottleneck at lunchtimes and breaktimes.

There are two sets of toilets, one on the ground floor and one further up, which is handy. There's still wi-fi everywhere, and there are benches on the upper floors, which provides a bit of extra spillover sitting/internetting/chatting space if the lounge is full or just too far away.

The welcome desk is now on the 1st (2nd for Americans etc.) floor, which may be a bit disconcerting. You can't immediately ask questions or get any reassurance, you need to follow the directions upstairs. I can absolutely see why - there simply isn't space for it alongside the lounge, and the 1st floor is both the reception and the teachers' area. I already knew what I was doing, what to do about shoes and slippers, and most of the staff I'd expect to meet, but for new students it might be slightly intimidating. That being said, new students are meant to arrive at fairly designated times when staff will be expecting it.

On the whole I was impressed with the new school, and I think it's an improvement in the most important area, which is the actual classroom experience.

Email ThisBlogThis!Share to TwitterShare to FacebookShare to Pinterest
Labels: GenkiJACS