I for one welcome our new cerasic overlords

You thought I was going to go to Osaka and Hamamatsu, and you'd get away without any pictures of sakura?

(Don't worry though - I didn't see any in Tokyo! Well, not many. Not enough to merit any posts)

M-san was keen to go to the Owl Cafe in Osaka before heading home, and I was of course happy to see owls. I'm basically happy to see owls at any time, under any circumstances short of some kind of hideous cannibalistic owl-cult.

On reflection, I would probably find it deeply unsettling to open the bathroom door and discover owls hooting cheerfully away in my shower as they rub shampoo into their noble scalps. Nor do I want to get invited on any dates, only to discover halfway through the second act that I'm slipping an arm coyly around fifteen owls in a wig standing on one another's shoulders.

Also, if I should find an ancient oaken door in the bowels of some monumental building, and tread wondering down myriad winding flights of water-worn steps into caves shaped by the forgotten fingers of prehuman things, thence making my way with shaking steps into the colossal hall of an antediluvian temple wherein upon a titan-wrought pedastal still squats and stirs the unthinkable bulk of Tylluan, and see then staring down from every ledge and crevice the innumerable eyes, like the stars of all the galaxies flung out over endless space, of all that frightful deity's strigiformous retinue perched in silent and mocking judgement upon mankind - that would probably also be suboptimal.

Inevitably, there were massive queues and we'd have to wait two hours to get inside. So we went for a coffee, and then decided to have a stroll by the river. There was cherry blossom and some food stalls out there. 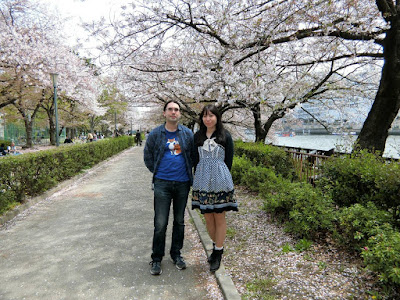 This outfit was super cute. Not mine, hers. Obviously. 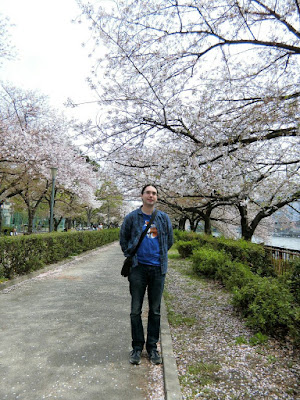 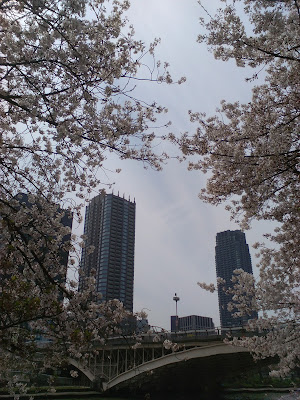 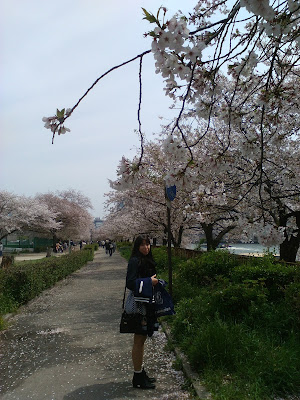 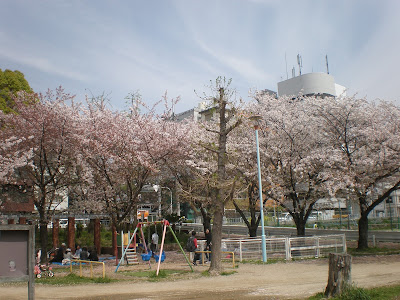 I like the combination of delicate blossoms, the playground tangle and the looming buildings here. 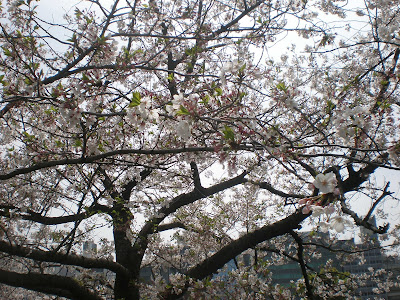 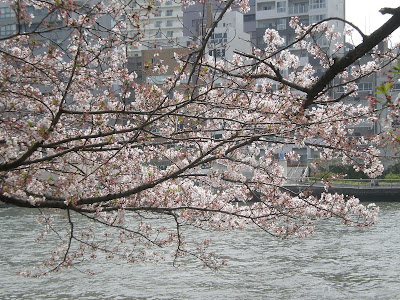 I kind of have a thing about trees over water. 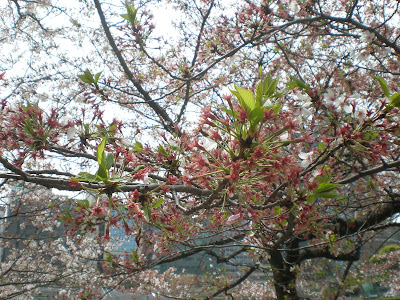 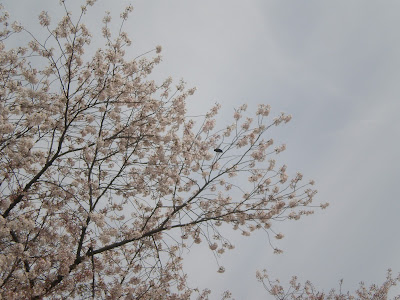 Bird! This is a crow. I've had almost no success photographing Japanese crows. They keep running away. 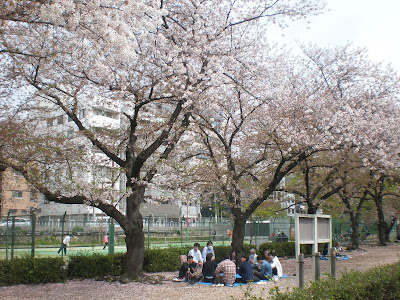 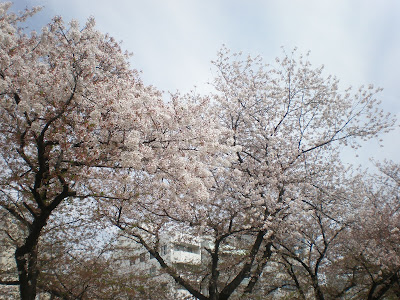 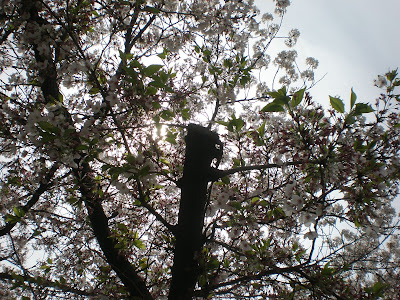 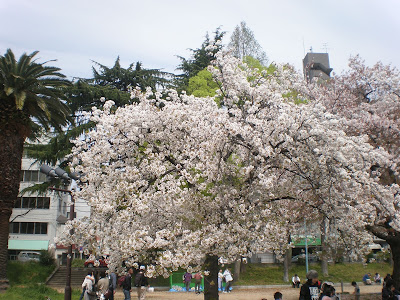 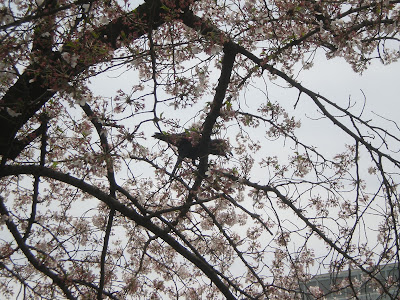 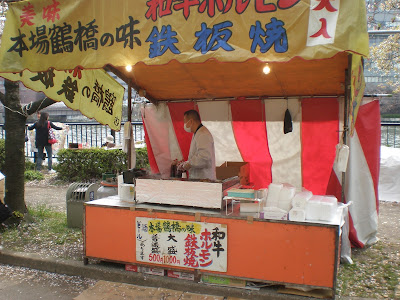 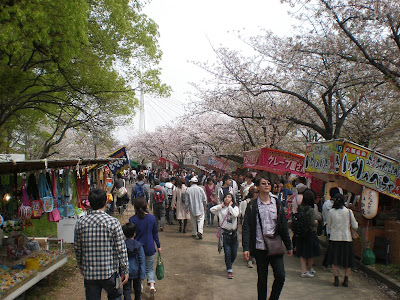 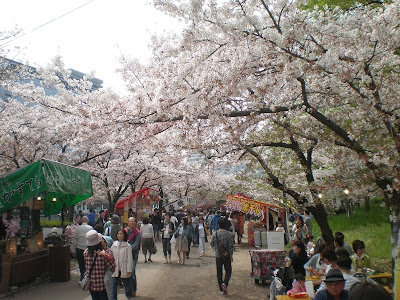 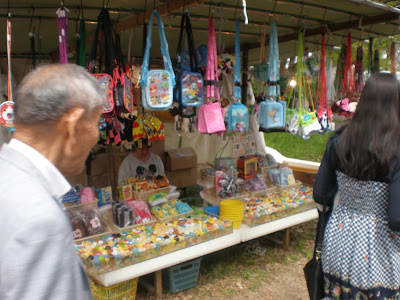 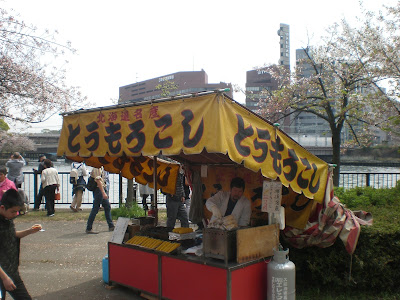 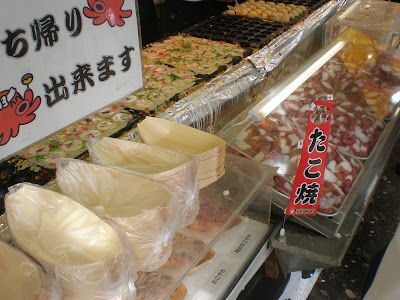 This one is takoyaki! The black things that look like pizza are trays with about 16 cups for the batter (like a bun tin). Under the wooden bowls are models of some of the different options - takoyaki with various extra toppings, basically. To the right are piles of octopus chunks for use in the takoyaki balls. The notice on the right says "takoyaki" (たこ焼) - you might have seen the "yaki" character in the teppanyaki stall above, and on yakitori or yakiniku stalls in photos on earlier posts. The one on the left is something about takeaway, as you could take yours away or eat at a table round the back, which I think is just visible in the next photo. 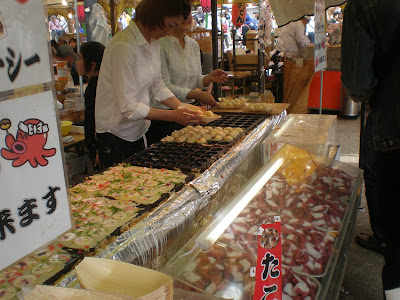 This lady is dishing up some takoyaki.

So, takoyaki (literally "grilled octopus"). It's actually a bit more complicated, unlike some of the other "yaki" dishes. Basically it seems to be a small piece of octopus stuffed into some batter, which is very quickly cooked over a high heat in these tins.

I really wish I could have captured the cooking process, because it's very impressive. This is a reasonable video of how the pool of batter transforms into individual balls.

We shared a dish of takoyaki. With apologies to M-san (I know you like it!) and to Japan in general, I wasn't sold. It's a texture thing. Basically the balls are extremely glutinous, which isn't really my cup of tea. On top of that, it didn't seem to taste of very much, apart from the octopus bit at the centre. I'm not very good with food that doesn't taste of much, particularly when it's also got a lot of texture - it's not a foreign food thing, I can't stand potato salad, for example, and some kinds of bread. It's just something about eating pure texture.

It's a shame, because I quite like octopus otherwise. I had two and M-san kindly finished my spare. However, I was able to secure a corncob to devour with aplomb, and M-san spotted a taiyaki stall on the way back.

I've read (from the BBC, for example) that glutinous textures are much more popular in the East than in the West, and possibly textural variety in general is, so that may be part of it. Experience suggests I'm unusually fussy about it though, so other people might find takoyaki an easier meal. 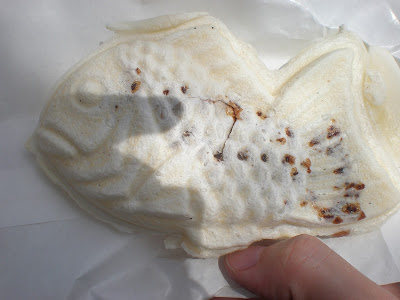 This is my first taiyaki! I've been intrigued by them ever since they were mentioned in Megatokyo, so... about ten years. Ulp. I actually never got to try proper taiyaki last time, despite living round the corner from a taiyaki shop - I'm not sure how I managed that, I always intended to go... I did have a "taiyaki croissant" in Karatsu though.

I have a certain inclination to mix up "taiyaki" and "takoyaki" but I'm absolutely clear on which one I prefer! These delicious cakes are a bit like mochi - there's a thin pastry wrapping around a filling of, in our case, red adzuki bean paste. They're a little chewy also, but very tasty. You have to be careful eating them though, as the filling wants to burst out and go everywhere. When I first heard of them I thought they'd be more like, oh, a mince pie texture, but that's based on wheat flour rather than rice.