My last weekend in Fukuoka got a little complicated. I was lucky enough to have several friends suggest meeting up, but then ran into complications trying to actually schedule things. I suppose the trouble is that you can easily schedule one uncertain thing into a known schedule, but trying to juggle several things without any idea when they might happen is tricky.

What I did manage was to meet KT-san again. This time we didn't arrange anything as ambitious as going to another town (possibly a shame in retrospect, but the weather had been iffy) but just went for a walk around town. Obviously, we started in Maizuru Park.

It's possible that by this time you're getting a little tired of seeing cherry blossom, in which case I must warn you earnestly on no account to visit Japan in the spring. 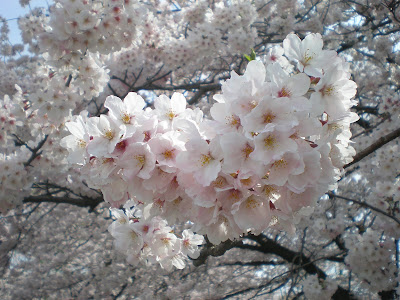 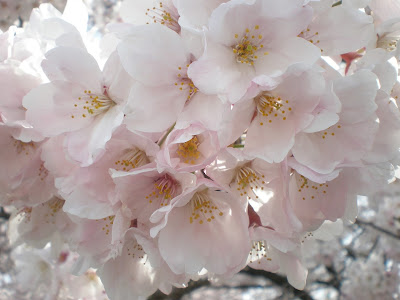 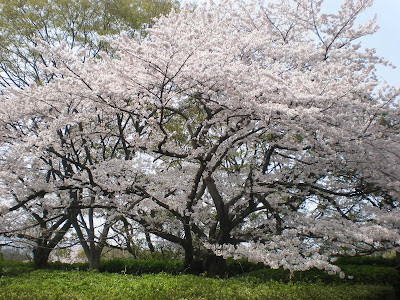 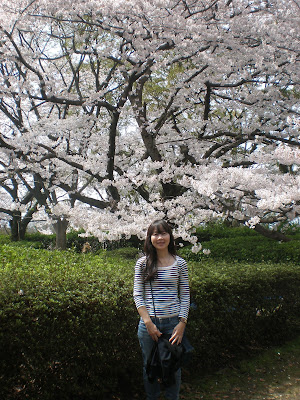 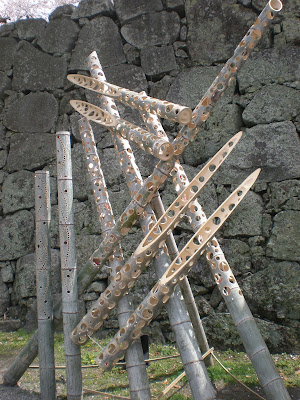 I was a bit alarmed by these torture devices to begin with, but they're actually some kind of light-up sculpture that looks quite pretty during the evening. 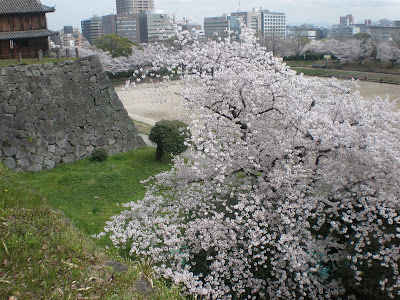 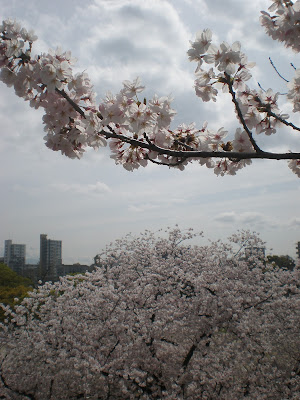 I like the way clouds seem to spill from the blossoms here. 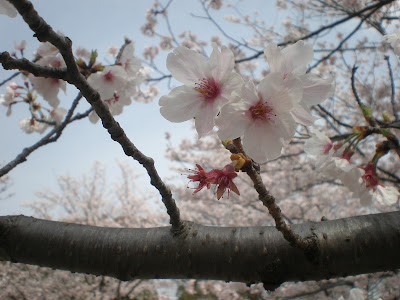 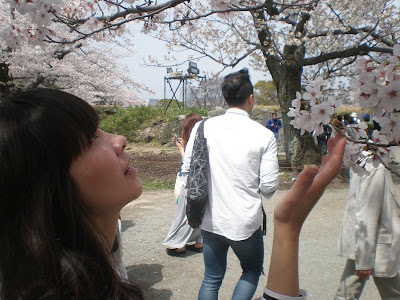 Candid unposed snapshot - shame about the random guy who walked across and messed up the framing! 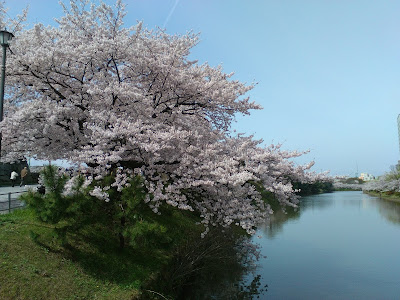 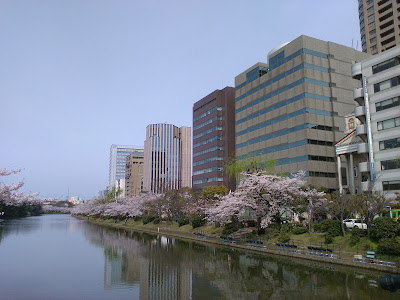 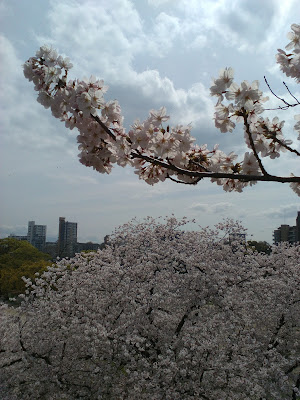 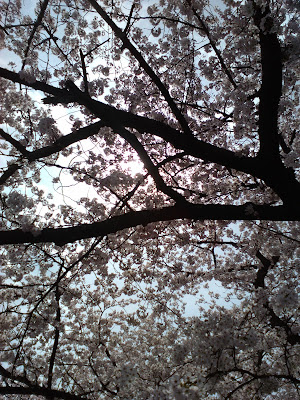 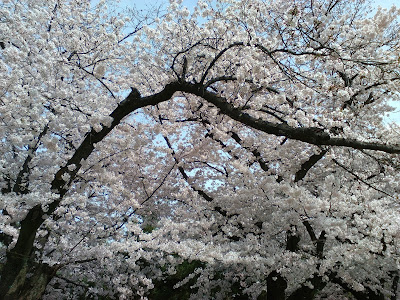 Once we'd seen basically every cherry blossom in Fukuoka, we wandered over to the festival area where there were still lots of stalls. We decided to try some sweets. 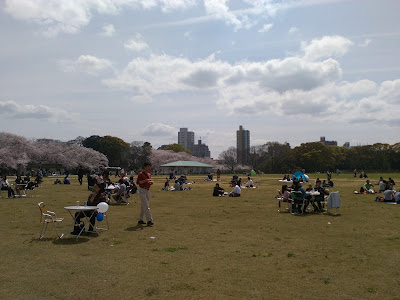 Not as exciting now - the flea market's gone. 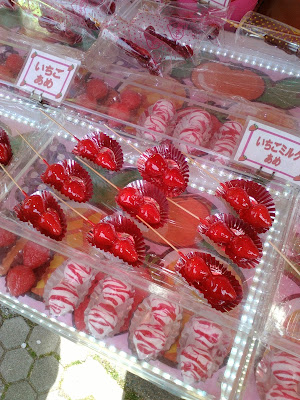 These surprised us both. They look incredibly sugary (which they are) but we thought they'd be relatively soft, like toffee apples tend to be in my limited experience. In fact, the alarmingly-red candy coating is extremely hard. Meanwhile, the inside is a hot strawberry. This makes eating them a serious challenge; you're trying to crack the shell with your teeth, applying exactly enough pressure to fracture the sugar and break a piece off, but not so much that once you've done that your teeth pass effortlessly through the strawberry, embedding sharp splinters into your gums.

After our snack, we decided to head over to Canal City and get some proper lunch. You can actually join us via Google Street view, here. We went to らーめん山頭火 (Ramen Santouka, just a family name I believe). 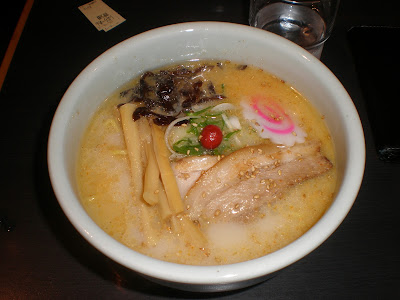 Afterwards KT-san was very politely keen to get a crepe, so we stopped by the crepe stall. I can't remember the last time I had a crepe, to be honest. This one was vast - like someone rolled a pizza into a cone, except the pizza was made of cream and bananas. 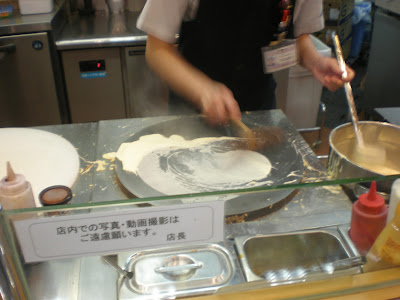 They make the crepes so fast that I only managed to capture one picture of the process, alas. It was very impressive.

I should probably confess that I'm not very sold on crepes. Cream is fine by me as, say, a small dollop to take the edge off a succulent fruit pie, or with some kind of pudding, but I wouldn't generally just eat some cream. I don't find it tastes of very much. So the crepe was fine as it was, but not really my sort of thing. On the plus side, fruit!

Okay, so possibly I went off on that tangent to delay having to explain purikura, because, well. Okay, I have very limited understanding of the history and role of purikura in Japanese popular culture. In purely practical terms, it's like this: you go into a photo booth (ideally with one or more friends, but you can do it alone - this is a Meaningful Thing in literature because it demonstrates you are either quirky and individualistic, or more likely a tragic loner). The booth has some kind of theme. You take photos, and the machine encourages you to adopt particular poses. It then applies some image enhancements, and you can apply various effects to them as well, like writing, drawing, adding stickers and sound effects, and so on. You then get photos back, usually as a sticker.

KT-san discovered that I'd never taken purikura so suggested we go, so I could sample this essential part of the Japanese experience. I was fine with it because I'm an extremely silly person.

It actually took us a while to find any machines. KT-san was starting to worry that purikura no longer existed and was horribly dated, and I suspect feeling vaguely traumatised as we all are when we realised Times Have Changed and Young Folks now look on with bafflement at the pastimes of our youth. Then we found an enormous cavernous chamber full of more purikura machines than you could shake a reasonably-sized stick at, full of eager customers. So never mind.

We found out that instead, what's happened is that purikura machines have become so terrifyingly hi-tech that KT-san wasn't quite sure how to operate them any more. It's all multi-layer interfaces and emailing you copies of your pictures now. Unfortunately we weren't warned of this in advance, and it inexplicably only gives you 30 seconds to type in an email address (which must be one associated with a Japanese phone, because REASONS) so we didn't get the digital versions. Sadface.

On the plus side, are we not cute? 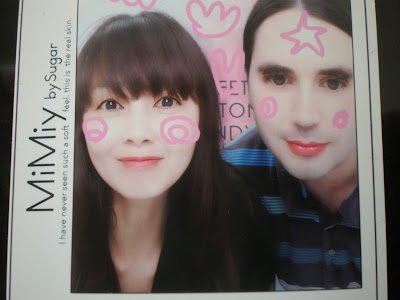 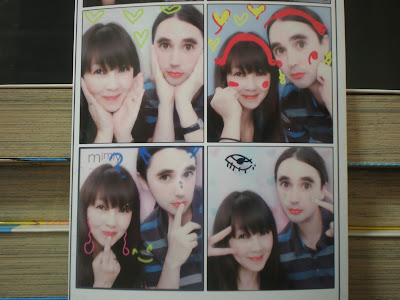 So yeah, that was a day well spent.