For my third day in Tokyo, and my final full day, I planned a slightly more tranquil day. The plan was roughly as follows:

As usual, things didn't quite go as planned, but that's the advantage of built-in leeway.

You can approximately follow the day's route here. Bear in mind though that because Street View is designed for cars (sigh), the combination of overlapping flyovers, subways (in the British, "road underneath the road" sense) and pedestrianised areas makes it difficult. Inexplicably, you can independently use Street View to wander around Shinjuku Gyoen, but you can't actually incorporate those footpaths into a map like this. Also, the section from Shinanomachi to Roppongi was actually done by underground, not on foot...

I caught a fairly early train to Shinjuku station, and strolled vaguely in the right direction until I found somewhere to break my fast. Although there was the ever-popular Starbucks, it was very full, while nearby was an appealing French boulangerie. I chose to opt for Gontran Cherrier, where I had two (two!) exquisite pains au chocolat, washed down with pineapple juice. 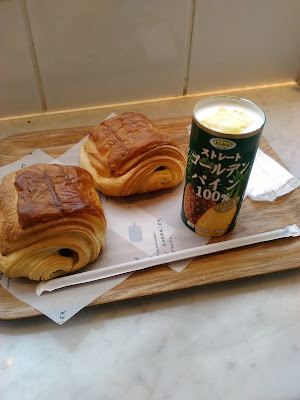 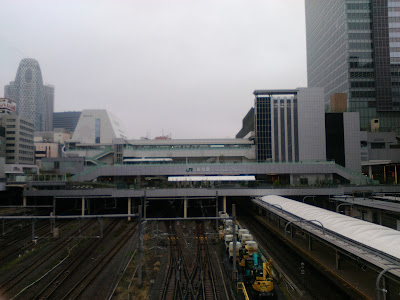 Part of a view over Shinjuku station. I'm not a city boy and I know Tokyo is particularly extravagant, but I'm always a bit struck by just how flippin' massive things are.

Fed and watered, it was time to head to the park. Throughout my time in Japan I kept taking photos of media-type things, so that I could find out more about them later. The next photo is an example; this poster was on a wall I passed and vaguely intrigued me. I discovered afterwards that it's とと姉ちゃん, a TV show about... well, a very complicated family history drama thing. Not something I would actually watch, to be honest, but hey. The image was particularly striking because it appears to have a heap of bullet casings in front of it, although it was actually some kind of pegs that are otherwise stuck in the wall (there's a couple just to the left of the poster). 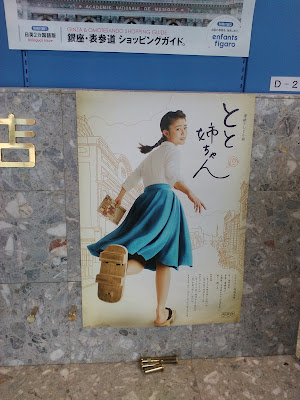 I didn't fancy walking along the main road, so took a detour. After a hearty stroll through various back streets I reached the Sendagaya Gate in the south of the park, bought my ticket (it's that sort of park) and headed inside. 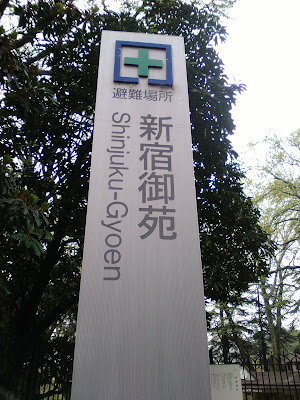 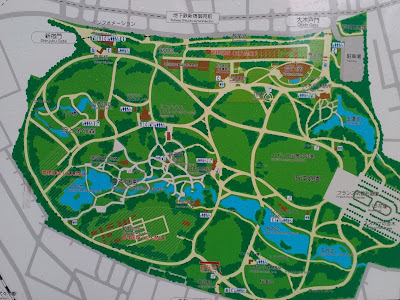 As usual, I took a handy photo of the map. It's genuinely very useful... there are a few map boards scattered about, but not having to look for one is always nice. 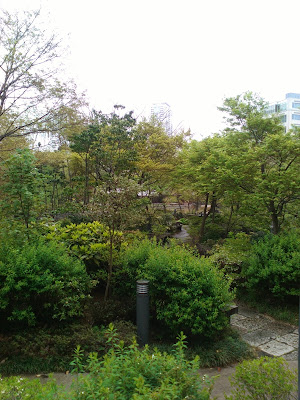 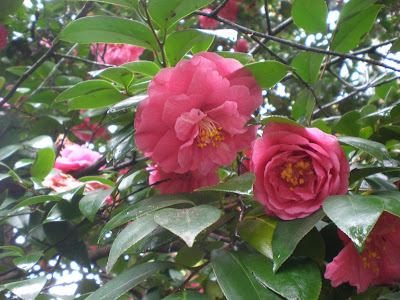 Honestly, it was far from the best day for park-viewing. The skies were as grey and overcast as those of my native land, leaving the greenery dull and the flowers morose. Dew, or possibly light morning rain, hung on the leaves and petals. 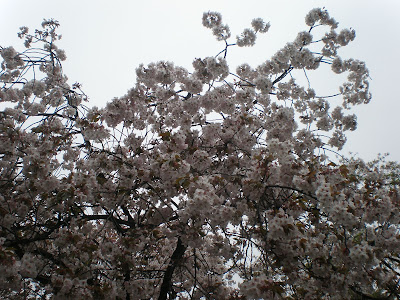 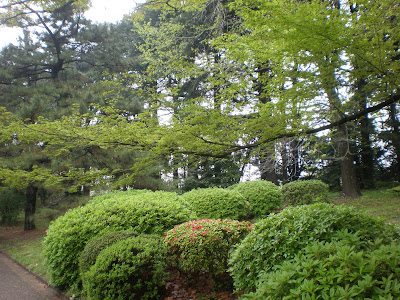 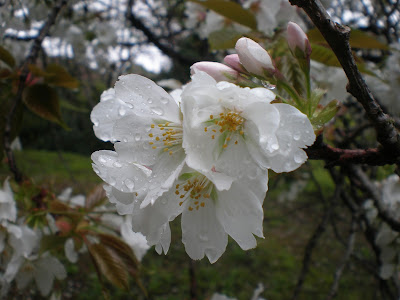 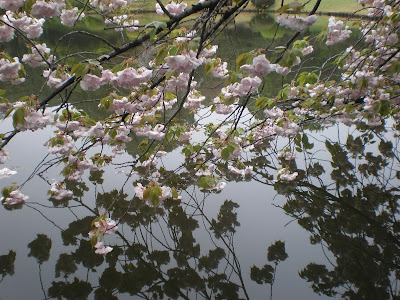 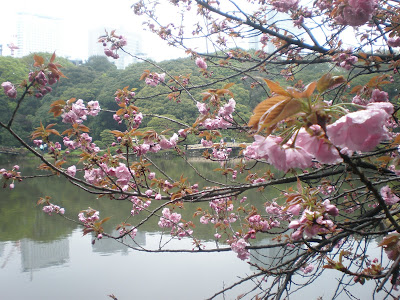 After a brief initial stroll, I paused in a handy teahouse (Rakuu-tei Tea House, 楽亭ティーハウス) to refresh myself and read a little. I had a fairly delectable cup of rose tea. 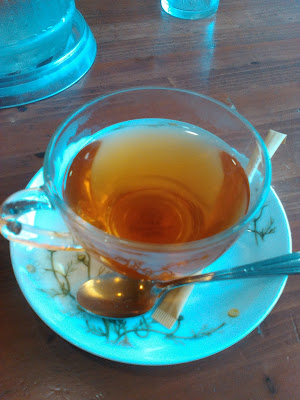 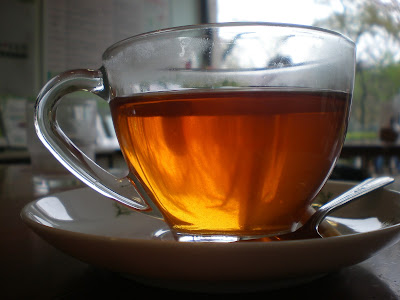 That over, I made my way towards the greenhouse. I didn't want to spend all day walking around the park, so having taken in a representative sample of trees and flowers, I felt it was better to get a snapshot of the other displays before leaving. 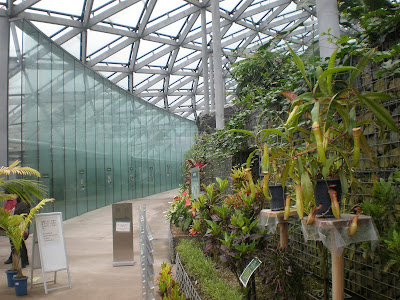 Pitcher plans hang by the entrance, though the risk of being seized and devoured is acceptably low. 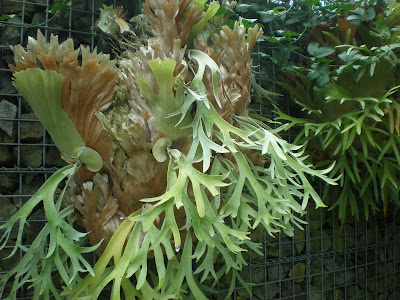 Some kind of alien infestation, its pod close to bursting. 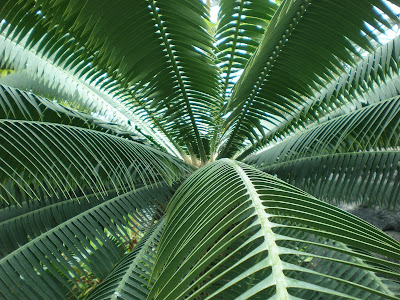 There is a mathematical nuance to these kinds of plants that I find quite appealing. 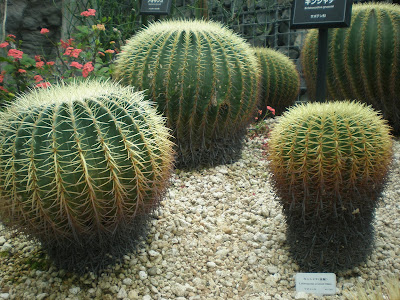 I know they're just cacti, but isn't the gradient of the spines quietly charming? No? Just me then?

Having had my leisurely fill of plants, it was definitely time to leave, and to grab some food. I headed back for the Sendagaya Gate to make my way elsewhere.

As I said, my initial plan was to head for Meiji Jingu, but I didn't. I can't remember why; I suspect I'd just had enough of parks, to be honest. Also, I was hungry! I decided instead to head vaguely towards town, and for some reason this ended up with me wandering right past Sendagaya Station and on to, I think, Shinanomachi. I'm pretty sure it's because I was wavering about what to do and just didn't make any decisions... 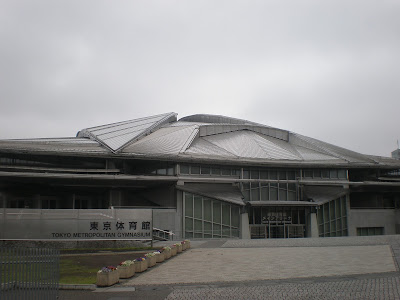 I passed this building along the way and was curious about it. Apparently it's the Tokyo Metropolitan Gymnasium. Looks a bit brutalist to me, for such a lively purpose.

I hopped on some combination of undergrounds and made my way to Roppongi Hills. I don't think I missed a huge amount to be honest. I mean, I'm sure it's a nice enough park/temple but I've seen plenty of both. And Shibuya itself is apparently "one of Tokyo's most colorful and busy districts, packed with shopping, dining and nightclubs serving swarms of visitors that come to the district everyday. Shibuya is a center for youth fashion and culture, and its streets are the birthplace to many of Japan's fashion and entertainment trends. Over a dozen major department store branches can be found around the area catering to all types of shoppers" so it sounds like I had a narrow escape.

The first impression I had of Roppongi was one of complexity, since it took me a considerable amount of trouble to extricate myself from the station. There were lots of escalators to descend (and possibly also ascend), a complex web of tunnels to weave through, and I was basically moving almost at random by the time I broke free into the sunlight.

The following map, borrowed from the Tokyo Subway, should give you some idea. Now bear in mind that when looking at this map, you have no idea where you started, and also you don't know where any of the numbered exits (when you finally etablish that's what the little yellow squares are) correspond to on an actual map of the actual city. To make matters worse, parts of the station connect to the Roppongi Hills Mall (or rather, to its own spidery network of escalators and tunnels) creating even more of a maze.

Look, I grew up in a small town. We were lucky to have a station. We didn't have things with multiple exits. The nearest city had stations with about two exits that were very clearly labelled with the street names and what they were close to, not arbitrary numbers. 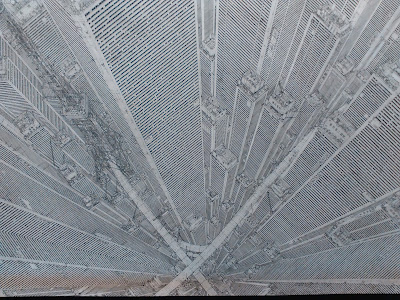 At least some of the tunnels contained cool artwork, like this incredibly detailed drawing of terrifyingly high futuristic skyscrapers, by Daisuke Tajima. 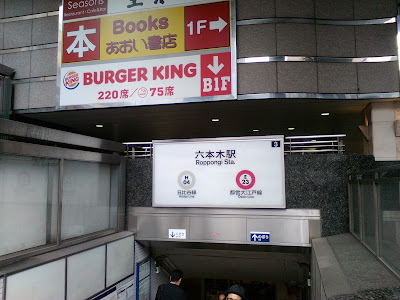 Nobly ignoring the sign labelled "books", I struck out for sightseeing.

There's a mass of overlaid roads and flyovers which makes getting around a bit tricky for the uninitiated. Also, unexpectedly gloomy and grim for such a supposedly posh area.

I wandered around for a while looking for somewhere to eat. I'd thought about visiting 21 21 design museum, so I went and had a look. The route took me right back through where I'd just been, then through a shopping mall of fairly staggering expensiveness (to my eyes at least - maybe that's just the impression they want to give?) of which more in another post.

Having finally made it back out of Roppongi station and through the scary shopping complex, I decided the design museum wasn't actually that interesting. There's a little shop and some info before you actually go in, and it looked like it would basically be a mixture of a fairly modern art museum, the kind of semi-experimental "design" I've seen a lot in museums where the products are largely useless, and a display of high-end goods. Maybe I'm unfair. But I was hungry, and it really didn't feel like a high-priority place to visit on my own (without anyone to make catty remarks to, that is), so I left.

After grabbing some lunch I took advantage of the lockers in the shopping complex to dump my bags and coat. I went on a quick walk around the district before heading off towards Roppongi Hills itself. 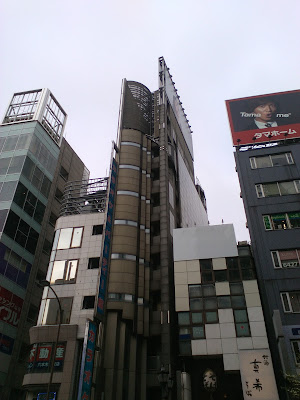 One of the things that's semi-interesting about writing up this blog - which I'm currently doing seven months later because reasons - is the slipperiness of memory. There's irrelevant details I can remember, and others I completely forget. For example, I remembered going for curry during this trip, but in most cases I don't remember what I ate on a given day unless I make a note for some reason. That's one reason I take the food photos, so I can comment on various restaurants or the availability of food (I eventually worked out that I didn't have a serious lunch today, just munched some snacks, so I had curry for tea).

Another is routes. There are times when I can follow exactly the route I took, even if it's a very long time since I was last in that place. At other times, everything seems to blend into one. Using Street View to retrace my routes, which I've been doing here recently, makes things more difficult because I'm not actually experiencing the walk - it's designed for cars and you get different views, limited routes and so on. 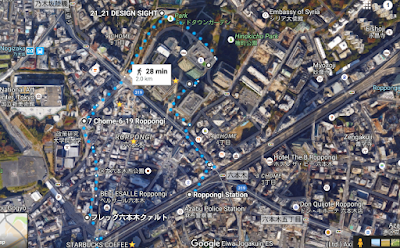 This isn't the actual route I took, because Google Maps can't handle routes that involve a labyrinthine journey through the bowels of a multi-storey station and ditto shopping mall. You can ignore that "28 minutes" too...

My walk ended up being relatively short in the end, partly because I wanted to ensure I had time for the Mori Tower. Partly, to be honest, because mostly Roppongi didn't look qualitatively different from the rest of Tokyo (or Osaka, for that matter) so there was only so much to look at. You can vicariously experience this same walk here: Google Maps 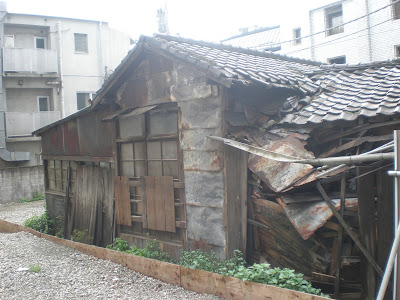 This was the most interesting building along the way; it's just tucked into a street right off the main road. I was really surprised because it's so rare that I see a genuinely tumbledown building, well, anywhere. Let alone the middle of a city. When I do see crumbling buildings, it's usually condemned offices or abandoned factories, not houses. There are a few boarded up houses sometimes, but then I suppose maybe the construction differences mean they don't look like they're falling apart from outside. What's interesting is that when I checked Street View, this house still appears to be there - I wondered if it might have been damaged around the time of my visit and be waiting for repair, but it seems not... 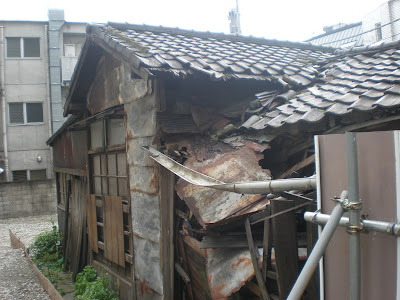 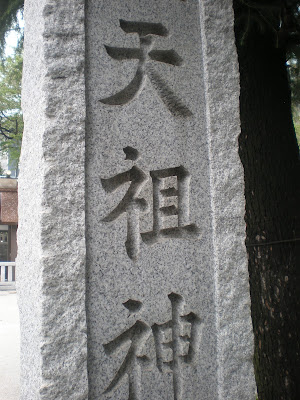 I spotted this shrine on a side street. 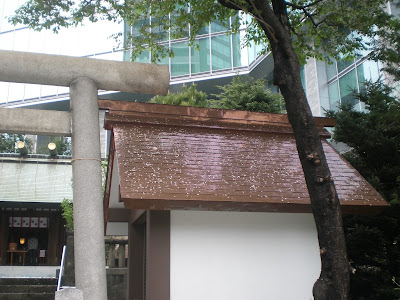 Mostly I was just struck by the glistening copper roof of the side building (terminology???) and the flower petals speckling it. The picture doesn't really do it justice.

After about half an hour I decided I should head back to the Art Museum, since I knew the two could take up quite a few hours, and I'd want to get my bags before my... four hours? expired and it demanded more money. That would leave me conveniently placed to get some food in a part of town with plenty of options, and then head home at a reasonable time of evening.

Since there's quite a lot of the Mori, I'll leave that for another post.