For my last day in Tokyo, my rough outline is: a local exhibition on writing systems; the National Diet; and possibly the Edo-Tokyo Museum.

Timing doesn't quite work out. Packing and checking the room takes longer than expected. I'd been planning to head over to the museum for opening around 10am, but it's about 10.30 when I arrive after struggling to find somewhere to dump my luggage in the station. Thank goodness Japan has coin lockers, is all I can say. Not nearly enough, mind!

Having (with considerable difficulty!) found this place already, I make my way through the mall, into the secret passages and arrive at the museum. 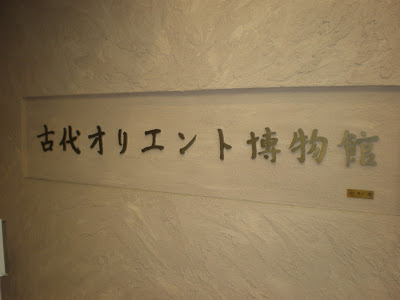 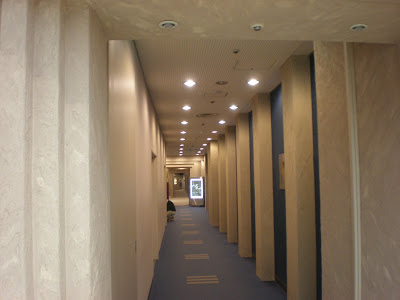 I appreciate their effort to make it feel like an Ancient Orient Museum.

The thing which actually drew my attention is a temporary exhibition on ancient writing systems. There's limits on photography throughout the museum, so mostly I just looked at things. 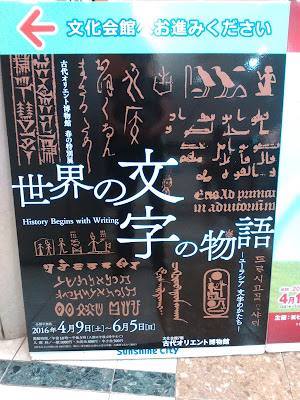 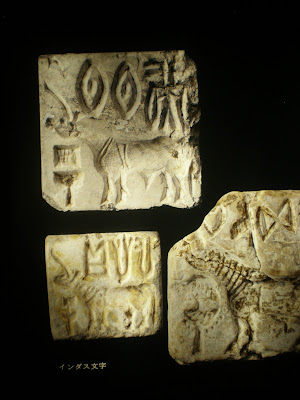 These are actually photographs of photographs, not of the real things. This is Indus Valley script. 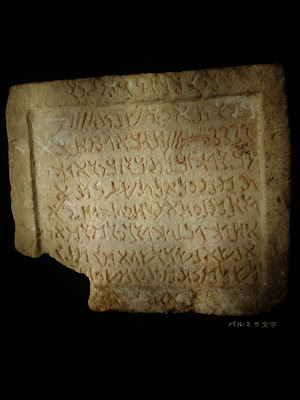 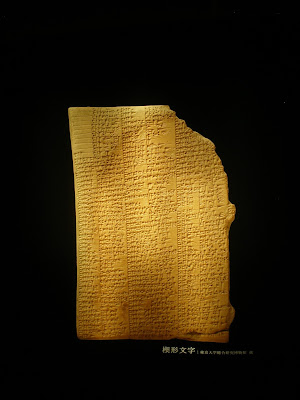 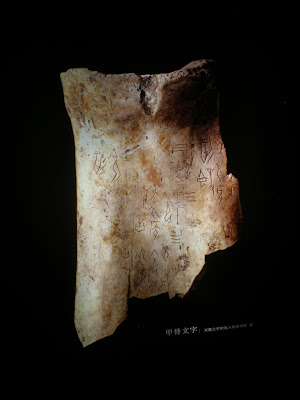 There are lots of tablets, monuments and other artefacts with explanations of how they could be read. 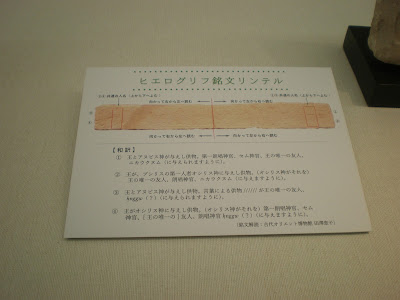 A guide to reading an Egyptian inscription 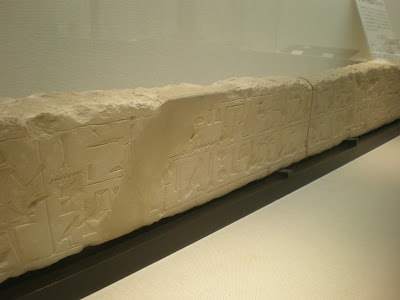 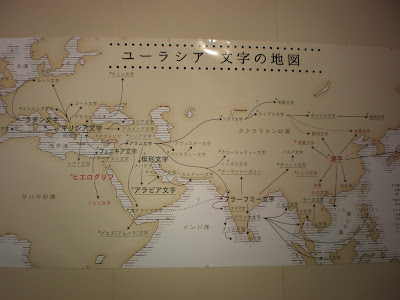 A map of the spread of languages and scripts

By the time I leave it's already noon. I decided to get lunch in the area, but the restaurants nearby are absolutely packed, rather to my surprise. I'm not used to places being jam-packed at 12 noon; in the UK that's normally still the "early lunch" slot. About 12.30 I manage to find a seat in an udon bar and munch some noodles. 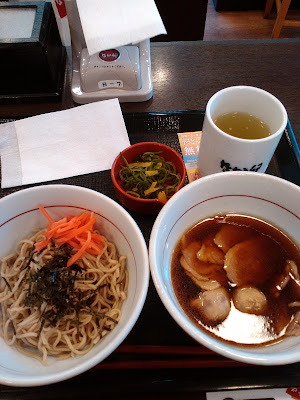 Now I'm off to central Tokyo again. By the time I've worked out how to travel to the Diet, and actually done so, it's about 1pm and pretty warm. 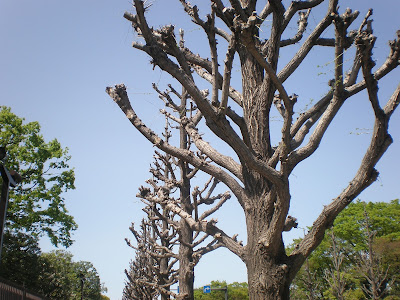 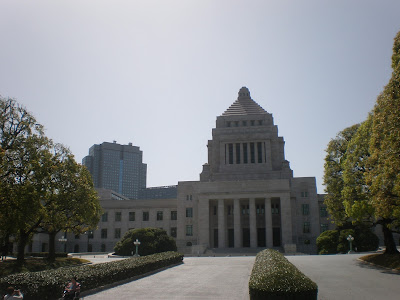 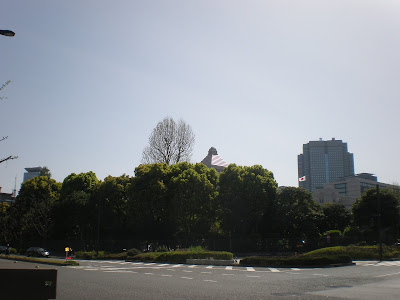 I'd vaguely had it in mind to try and go on one of the tours they apparently offer. However, now I'm actually here I can't find any information on this anywhere. Yes, I should have researched it beforehand, but it didn't occur to me that there wouldn't just be some kind of ticket gate. Maybe there is one I missed? I walk about halfway round the site and took a picture of the main entrance, but it's looking distinctly unpromising.

Also, there are lots of police and a notice advertising Extraordinary Police Measures in place, which doesn't exactly scream "welcome tourists".

Okay, I'm not hugely invested in this, to be honest. It's another country's parliament. I haven't even been inside my parliament.

I give up and wander over to the Imperial Palace Park, where I eat grapes and sat down for a much-needed rest. All this museuming (with a backpack, albeit a smallish one) has been making my feet pretty sore these past few days. It's a nice, restful place to chill. 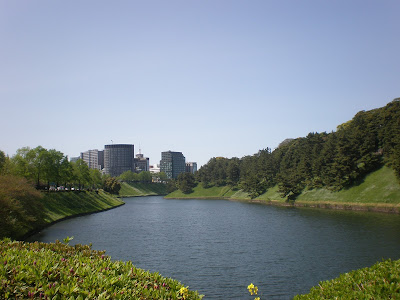 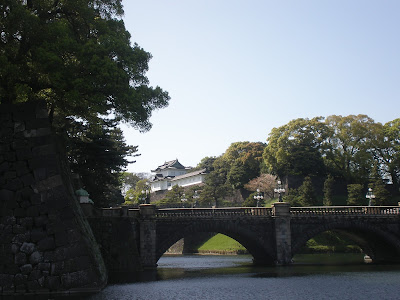 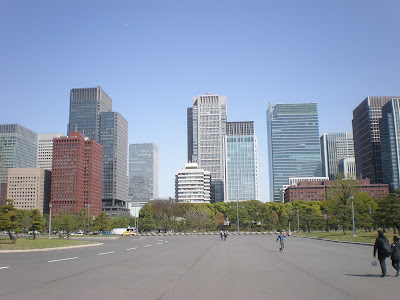 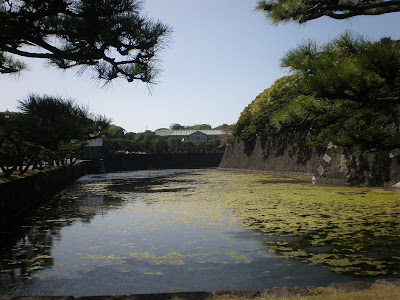 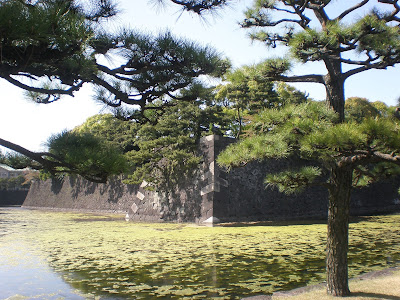 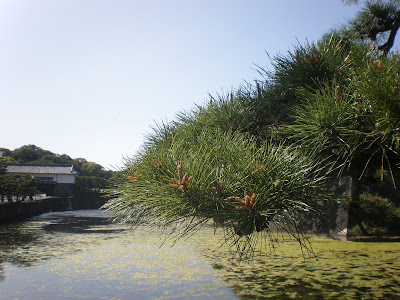 After a while I'm getting thirsty, so I mooch on towards Tokyo station and find a cafe. By the time I've finished my drink it's nearly 3pm. I work out that I'd probably get into the Edo-Tokyo Museum, but it would be a bit tight (especially given my previous form on finding places) and an hour didn't seem to justify the cost.

So, as so often, I end up just mooching through the streets. I'm not sure if I'm a particularly ineffectual tourist (plausible), but I do tend to find the 5pm closing times make it relatively hard to do more than one thing a day when attractions are some distance apart. Then again, I'm not rushing about to get to them, so maybe I just lack commitment?

In the end I wander up towards Akihabara (because I had to do something), and then sit in another Starbucks musing over my arrangements for collecting luggage and getting to the hotel. Rather a desultory last day, alas. At least it's been sunny. 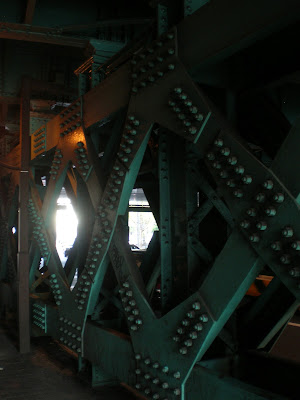 Interesting girders under a bridge. I find you do a lot of walking under bridges in Japan. 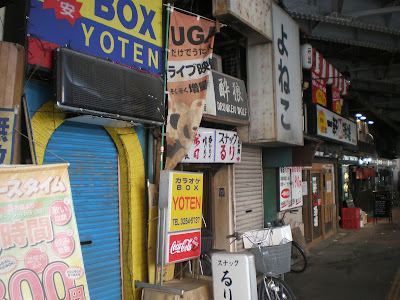 I have a curious fascination with these little unfashionable shops, which in this case live under a bridge. 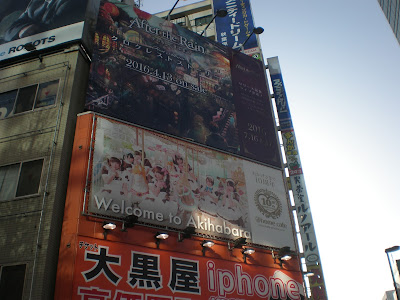 This is pretty typical of Akihabara. It gets talked about a lot, but from what I can see it's shops that sell electronics, mixed with some cafes. I'm not entirely sure what the fuss is about. 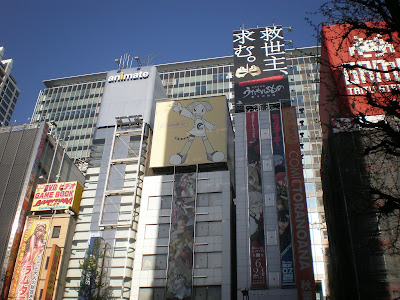 I get the train back to Ikebukuro and recover my luggage. And now, off to the final hotel!

I'm glad I left plenty of time for this, because getting to the hotel proves to be an extremely time-consuming and stressful process. Since I'm finishing this post months later, I can give only an approximate summary...

There are three main contributors here. One is just the general stress involved in travelling with a lot of luggage to a hotel you don't know, in a city you don't know, by a route you don't know other than from basic online research, via stations designed primarily for people who know what they're doing.

The second is lack of information. For example, there's a point where you have to change platform along the way to continue your journey. This isn't indicated anywhere useful. I can't actually remember where it was, but the route involved what feels like leaving the station entirely, walking along the road for a minute or two, then going up some stairs to a different building. You then need to buy a ticket to get through the ticket gate, which would be reasonable enough if it was entirely clear that it was the right place, but it isn't.

Finally, there's some alarming inconsistency between naming. In my case, I'm travelling to a hotel near, but not at, Narita airport. There are two stations in this district, on two different lines. The hotel I'm heading for is attached to a station which has always been called Keisei Narita when I've seen it, on the Keisei line. But much of the information I'm seeing here only lists Narita. I can't remember whether this applied to the ticket machine, but it certainly did to the destination lists.

Am I at the wrong station? The wrong line? Are they just not mentioning my station? It's already late and I've trudged around all day; I have no desire to be trying to get from the wrong station to the right one while dragging a suitcase in the dark in a completely unknown part of Japan when I have very limited access to maps.

A very real hazard is that the Narita could mean Narita station, or Keisei Narita, but it could also in theory mean Narita Airport. I mean, it seems unlikely they'd do that, but on the other hand a train that's only stopping at X, Y and Narita could very easily be an express service to the airport. It's a long way to the airport; I definitely don't want to pay to go there and back, wasting a lot of time in the process.

To complicate matters further, there are different types of trains. Some of them are normal trains that accept a normal ticket, which I've bought. Others, like the Skyliner, require an advance reserved ticket. I am concerned that I might accidentally get on the wrong type of train and end up in trouble.

Eventually (after about half an hour) I finish a nerve-wracking and fairly exhaustive analysis of the evidence, and conclude that Narita here does in fact mean Keisei Narita. Apparently the train line choose to only call it Narita because it's the Keisei Line, so must be Keisei Narita? I can't help wondering also whether some kind of commercial rivalry is going on and the two services refuse to acknowledge each others' existence... the Keisei Line is run as a rival to Japan Rail, which to me feels completely insane, but then my country insists on auctioning off public transport as a diabolically-contorted series of monopolies, so who am I to judge...

I am not alone in this confusion; there's a lengthy explanation on this wiki page.

Finally, I reach the hotel safely. It really is right next to the station. 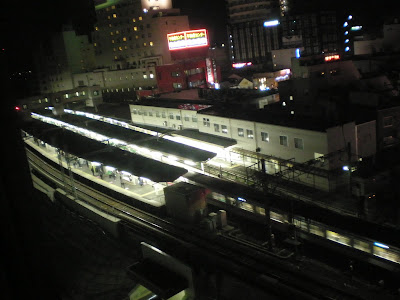 From here, the journey back the following morning proves so dull as to not be worth discussing. I am met by my parents, and as we head to the car, receive a phone call that my grandmother is being rushed to hospital.

As you can imagine, I didn't particularly feel like writing up my trip or even thinking about it for a while afterwards, even once things settled down. As such most of these posts were written or completed months later.